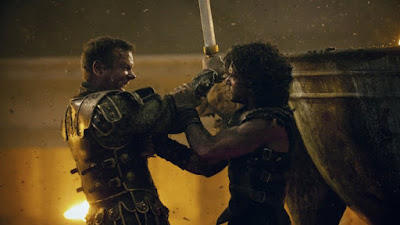 Others, perhaps rightfully, will also find little point investing themselves in a movie where the volcano is destined to be the only victor. Well known history tells of the ill-fated events of 79 A.D., when a small coastal town in the shadow of Mount Vesuvius became buried under miles of super-heated ash after the volcano erupted in a devastating spectacle; centuries later, after relentless archaeological digs have unearthed the fossilized remains of Pompeii’s numerous casualties, their shells persist as reminders of the uneasy balance man must strike with a vengeful nature constantly casting in unrest. Something stimulating, perhaps, could have been done with this idea on a big screen. A perceptive screenplay could have inspired rousing drama focused on the human nature of the events. Cautious filmmakers with steady hands might have dealt with the detail indirectly, as Lars von Trier did in his world-ending drama “Melancholia.” A pointed philosophical metaphor may just be buried beneath material this ripe for interpretation. But “Pompeii” is the sum of neither. Directed by Paul W.S. Anderson, famous for his science fiction horror picture “Event Horizon,” the movie is a loop of impossible reason, set to the beat of an urgent drum that looks impressive and dazzles the eyes, but ultimately leads nowhere other than the emptiness of our own lasting impressions.

The protagonist is played by Kit Harrington, of “Game of Thrones” fame, whose chiseled physique and dreamy good looks are conventional hooks for the more casual onlookers. He plays Milo, a Celtic slave who has grown up in constant grief after observing the slaughter of his entire family when he was a young boy. As an adult, his existence depends primarily on an ability to appear as a silent loner while being a force of nature in the open arenas, and when he is shipped off by the Romans to Pompeii to compete in a gladiator tournament, he finds fate on his side: the games are being preceded over by Senator Corvus (Kiefer Sutherland) and Proculus (Sasha Roiz), who were responsible for his family’s bloody demise. This of course means that his entire demeanor will be brooding and enigmatic to all his imprisoned peers, including Atticus (Adewale Akinnuove-Agbaje), Pompeii’s champion gladiator, who is destined to be his enemy in the arena but soon establishes the obligatory camaraderie required of buddy action formulas.

Meanwhile, political intrigue runs through the veins of the prospective villains and government officials. Cassia (Emily Browning), daughter of Aurelia (Carrie-Anne Moss) and Severus (Jared Harris), has returned home from abroad after finding the empire insufferably totalitarian. Corvus’ arrival is a thorn in her side; he once attempted to woo her while she was in Rome, and now he is determined to use a proposal of marriage as a bargaining chip in a treaty with Pompeii, which desires critical resources from the empire. Their exchanges play like arguments restrained by etiquette, although the venom under the words is palpable; she can’t stand the mere sight of his smug face, and he relishes the idea of her being rendered powerless to his almost predatory come-ons. Somewhere in that is the random interjection of Milo, who manages to show up throughout their encounters like a dog constantly getting off the leash. Unbeknownst to Corvus, those chance encounters are to be small preliminary build-ups to a challenge that must commence at the exact moment of Vesuvius’ great eruption, because no one has shown up to simply watch swords and shields clank on open battlefields while a PG-13 rating obscures the gory details, right? Those notions are foreplay to a climax that includes tsunamis, volcanic bombs being hurled into town, fiery outbreaks, ground collapses, earth-shattering tremors and plumes of ash that roast innocent bystanders.

Anderson, in effect, is borrowing his film’s trajectory primarily from “Titanic,” about similar characters in class divides who are swept along the relentless current of disaster that must unite them, however uncomfortably. But Cameron’s movie, lauded for telling a well-meaning story aside from its impeccable historical detail, is on a completely different level than this, which plays like a cliff notes version of how this idea functions. Chief among the mistakes, Harrington and Browning are not engaging leads. Neither, for that matter, does Sutherland’s Corvus really seem all that menacing; take away his gift of gab and position, and what is left underneath is a shallow vessel carrying a sword. The one interesting character is Akinnuoye-Agbaje’s Atticus, but the film makes the mistake of using him to verbally elevate moral justifications in others instead of developing him otherwise. We are told, early on, that he is the greatest of Pompeii’s slaves, and that one more victory will lead to his freedom. Milo argues that Rome’s political grasp will prevent his eventual liberation. Ok, that’s a thoughtful idea to work with here. Alas, if you think Anderson is going to circle back on this arc for any decisive purpose while the entire city is running away from a volcanic explosion, you are sadly mistaken.

The movie is not without its bright spots. I admired, for example, Milo’s wisdom of horses, which gives him something relatable to do on screen while the peripheral violence overwhelms everything else. The production design does a good job of creating a city that feels like more than just a bunch of set pieces standing in a studio lot, and the special effects are, thankfully, not cartoonish or obvious; there is a real sense during all the mayhem of the third act that tidal waves are actually crashing against the façade of a city, and that actual volcanic clouds are moving through the streets while the victims in the foreground foolishly attempt to outrun them. Their drawback, ultimately, is that they are all pieces of a puzzle that can be solved with minimal effort. Everything on screen is the result of safe bets rather than challenges or risk. Sometimes that can be fun, especially if you’re young and naïve and only care about the surface of the matter. I have graduated from that platform. But who am I to complain? In an age where “Geostorm” and “San Andreas” can’t be bothered to put any effort into mere common sense, at least “Pompeii” has the benefit of basic competence.