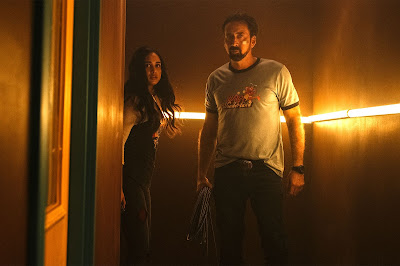 Consider the fascinating dichotomy of this idea. A series of mysterious fatal accidents have closed the doors of a small-town children’s restaurant featuring those clunky animatronic characters that you usually see in Chuck E. Cheese establishments, and years later the residents of said town still harbor enough resentment against the building that they take to vandalizing the property, sometimes even trying to set fire to it. Within those walls, they say, are the remains of a terrible legacy. Then one day, when a mysterious hot-rod enthusiast crashes his car on a road just outside the city, his lack of money leads to a dubious offer: if he will clean up the interiors of the abandoned facility while locked inside for one whole night, his car will be fixed and ready to drive off by morning. Of course, that means his agreement will lead to the discovery of negative energies permeating throughout the dark halls and musty dining rooms, once the setting of events that imply the creepy-looking animatronics are far more than just stuffing and wires. In some circles this is the same sort of irony that led to our festering fear of clowns, also once seen as an innocent facet of childhood entertainment. And perhaps there is a lot of fun to be had with that setup, especially for those who indulge in the irreverent possibilities of the material. But the new film “Willy’s Wonderland” is an even stranger offense: a vehicle that takes those risks and robs them of all possible tension and enthusiasm. For 89 minutes, we watch on helplessly as eager people show up in front of a camera and slog their way through material that could not be any more listless if it had been written by zombies.

The central problem, I suspect, involves how the writing deals with its lead character. Known only as the “Janitor,” here is a man who walks into his situation and regards it with not so much as a hint of shock or awe. There is a moment during his first violent confrontation – involving a mechanical ostrich – that establishes a dubious tone: he stares blankly at his nemesis, squints one eye, then awkwardly pushes out his lips as he is assaulted and nearly upended by the mechanical villain. Unfortunately for the robotic beast, however, the Janitor is not a soft pushover; after one or two quick-witted maneuvers, he is standing over the supernatural entity, beating it into submission, before scooping up the remains in a plastic bag and then resuming his task of cleaning the restaurant’s vacant interiors. Is there something the movie is holding back from us about its hero? Does he know more than he lets on? If not, then how does an ordinary wanderer simply step out of a tangible reality and into the lurid fantasy of this one without so much as an inflection of bemusement? The greater offense: he never seems vulnerable to the attacks of his eventual adversaries, always outwitting and besting them before they can get a good shot in on him (his minor wounds are bandaged by duct tape, I guess, for a sort of hilarity effect). That makes him less a personality and more a plot device, and a fatal one at that; because he can never seem to step out of his pattern of destroying the animatronics in very rapid succession, the movie never allows simple tension or horror to build up into something substantial.

The Janitor is played here by Nicolas Cage, a man of so many faces and distinctions that his charisma, at this stage, seems to hinge on his ability to keep a straight face. Fortunately for him, “Willy’s Wonderland” offers him not a single line of dialogue, instead choosing to make his character mute, I guess, to avoid having him explain where he is from or how he got there (not that any explanation would make much difference). That means all the film’s explanatory dialogue is left in the hands of the inexperienced, and boy do they have their work cut out for them. Consider poor and hopeless Liv (Emily Tosta), a rebellious teenage girl who knows the secrets of the restaurant and is seen early on engaging in potential arson… just before she is whisked away by her guardian (Beth Grant), also the town’s stone-faced Sherriff. Left handcuffed to a pipe as punishment, her teenage friends break her out of her predicament and venture back to Willy’s Wonderland, where they make another attempt to burn down the building just as they endeavor to free the Janitor from his predicament. How do they know he is there? Liv eventually offers up a backstory that can be seen coming from a mile away: the town’s law enforcement routinely offers frequent sacrifices to the animatronics as a way of soothing their temperaments, and the Cage character is only the latest in a long line of acquisitions. The reason? She explains the entirety of the origin in a flashback that involves child murders and satanic sacrifices, culminating with the sprits of said homicidal maniacs taking possession of the animatronics like bloodthirsty poltergeists.

All of this might have been amusing if it were not so shoddy. The director, Kevin Lewis, is ill-equipped to handle the material with any sincerity, and many of his stylistic choices appear to be sourced by an inability to competently realize effective technical language. His camera is often so clueless with nuance and staging that there are moments when we see the animatronics move independently without any musical or lighting cue, as if to suggest the actions are accidental in scenes that might have been able to use them as foreshadowing. Later still, during the sequences that involve the Janitor doing away with the mechanical monsters, the photography blots out the clarity of the details by blurring them behind shaky camerawork and muted color palettes. If this is, indeed, all part of the modern style that goes with these hyper-hipster genre pieces as some reviewers have suggested, I am dumbfounded how this can be seen as acceptable to an audience that ought to be provided much more detail.

Likewise, the screenplay by G.O. Parsons makes another fatal mistake: it supplies the movie’s villainous entities with their own running dialogue, framed less like ominous warnings and more like terrible one-liners right out of the Freddy Krueger manual of bad horror movie puns. What is the pitch here? The desired result? Are we supposed to be amused by the notion of these supposedly terrible entities having the good humor to row with their intended victims just before the blood starts spurting everywhere? There is no consistency in tone or distinction here. That leads to a climax that is equally mismanaged: after disposing of six of the seven animatronics singlehandedly, the Janitor finally reaches confrontation with Willy himself, the robot containing the soul of the restaurant’s former owner/homicidal maniac. He does not go down without a fight, of course, furiously swiping at Cage so that his shirt is torn to pieces and he is eventually flung into the ball pit, where he remains unmoving for one long minute.

Then, in the tradition of all the scenes that have come before it, the Janitor emerges with minimal injury long enough to tear the final animatronic to shreds, eventually emerging in the daylight to the stunned faces of townsfolk who were convinced he would never have survived. Their awe, unfortunately, is only matched by my very impatience with how this all is staged. The movie is a thievery of all it suggests. A horror movie without horror. A slick thriller that has no thrills, no sharpness or with, and no inkling to even generate the bare minimum of plausible suspicion. Even the animatronics themselves are more awkward than menacing, looking like overgrown stuffed animals that one might see lingering on the cheap table at a local yard sale. They, perhaps, are the most fortunate of the film’s victims: no effort was obviously wasted on them in the first place. Instead, all the time and energy was put into concocting a visual that repels rather than intrigues. We ought to have been engrossed by a premise this irreverent, this self-aware. All that these filmmakers manage to achieve in those final throes of foolishness is to inspire our loathing. I hated this movie more than almost any other film I have seen in the past year.