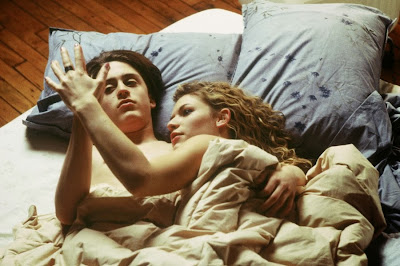 To understand the sometimes eccentric views behind Jason's attitude towards existence, one must first consider the source. The lad isn't even called by his first name in the movie; instead, he is constantly referred to as "Igby," a name that his own mother Mimi (Susan Sarandon) passed onto him out of habit whenever she would catch him in a lie. Mimi shuffles Igby through schools on the east coast like a hen who can't keep her chicks in order. She publicly denounces his behavior and throws the success of his older brother, the cheeky but stuck-up Oliver (Ryan Phillippe), constantly in his face. She pops pills at a rate that would make most drug addicts blush, and she barely acknowledges the one person who once mattered in the kid's young life: his own father (Bill Pullman), who is now locked away in an institution after nearly losing a long battle with his schizophrenia. The woman's credibility as a mother, and a supporter, doesn't exactly measure up; in one later scene, Igby tells a friend that he tends to refer to her by her first name because, well, "Medea was already taken."

As the movie opens, Igby finds himself, once again, being displaced from a top school somewhere in the east. Surprisingly, this particular removal has less to do with his attitude and more to do with the fact that he's managed to fail every class he has there (I use the word "surprising" very confidently, as most movies about would-be scholars tend to overlook laziness because everyone is more concerned with negative personalities). This, we immediately gather, is all part of a routine; Mimi slaps him around, shouts out angry obscenities, and informs her spawn that he'll be sent to another school until her learns to accomplish something. His next vocation (of no choice) is actually military school, an establishment with Igby haters who provide the film with its title (although I won't reveal how it originates).

When he manages to break free from his latest "prison," Igby takes a detour towards home and winds up in New York City, the residence of his business savvy godfather D.H. Baines, who offers the kid a job in remodeling an apartment for a coworker. The catch? This "coworker" Rachel (Amanda Peet) is actually D.H.'s mistress, who is convinced behind drug-induced delusions that the man she's sleeping with will one day realize how much she means to him. Of course, Igby is a bystander in this development, but when he refuses to return home to be whisked away to another school, he crashes at Rachel's apartment and winds up sleeping with her. It doesn't end there, either; during a house party on D.H.'s beach estate, Igby also meets Sookie (Claire Danes), a fetching and saucy New York college student who may hold the key to the lad finding his true significance in this twisted lifestyle.

The screenplay was written (and directed) by Burr Steers, a relatively new filmmaker that appears to be bursting at the seems with inspiration. His movie is the firm, funny and delicious coming-of-age endeavor that "Rushmore" should have been, a chronicle of irony that successfully permits the audience to identify with the story's sometimes-witless protagonist. No one can say that they truly admire Igby for everything that he does, but the events are human and realistic enough to buy into, and the themes are elevated by the charismatic performances from all the major stars. "Igby Goes Down" sure does go down all right, but not in the negative way that it could have. For that reason alone, the movie stands as perhaps one of the most enlightening and refreshing efforts of the year.