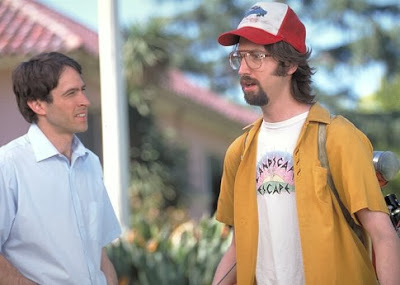 When it comes to being just plain unpleasant, "Stealing Harvard" seems to hit every right note. The movie is tired, childish, obvious and pathetic down to the most minute details, not even amusing enough to at least stimulate our negative response beyond dozing off. There is a moment early in the picture when the lead character breaks into a rich man's home, is caught, and then forced to dress like a woman so that the homeowner can spoon with him. What makes the joke painful to sit through is not the fact that it's completely stiff and uninspired, but the fact that it repeats itself not once but twice before the movie takes us to its closing credits. The screenplay by Martin Hynes and Peter Tolan doesn't even deserved to be acknowledged as a script; it's more like a series of disorganized cliff notes which are meant to tease better jokes in better movies without actually revealing all the necessary details.

The idiot plot revolves around John Plummer (Jason Lee), a young ambitious guy who is about to marry the love of his life, Elaine (Leslie Mann) and settle down to have a family with her. Elaine makes the announcement early on that their joint bank account has reached a balance beyond 30K, which will allow them to put a down payment on a dream home for them to live in. Unfortunately, the news comes just at the time when John's niece Noreen is accepted into Harvard University, and the hardworking guy is reminded by his trailer trash sister that he promised to pay for the tuition years before. As luck would have it, the total remaining to be paid for her education rounds out to around 30K as well. The conflict: does John squash his fiancee's dreams of happiness by giving Noreen the money in his account? Or does he go through with buying a house and break his promise to one of his only sane family members?

As usually is the case with these types of comedies, the movie has an alternative answer. In "Stealing Harvard," that option comes in the form of Tom Green, Hollywood's latest one-trick pony, who plays John's obnoxious friend Duff. The wacko landscaper is approached by Plummer with this distressing news, but Duff has a lot of ideas. Actually, he has a lot of illegal ideas, but that's not the point. John is of course very hesitant about following through with his friend's lurid suggestions, but seeing the only other way out of his situation is to hurt one person he loves, he realizes rather quickly that he has no other choice. This gives the movie permission to throw him into all sorts of unlikely but dangerous situations, including a botched liquor store robbery, an ambiguous pact with the local mobster, and even a halfhearted attempt to cash in on miners who want easy access to alcohol and cigarettes. And the movie doesn't even bother to resolve its conflict with any of these elaborate gimmicks; the conclusion actually stems from a suggestion made early on by one of the characters, which everyone ignores until they've tried everything else, and failed at it.

The script's biggest error is that it bites off a lot more than it can chew; the energy and ambition are there, but the content doesn't resemble anything close to what is possible with the concept. Further fuel is added to the fire when Tom Green, a former host of a pre-"Jackass" MTV variety show, makes his long-dreaded appearance in the film but barely comes off as a lite version of his former annoying self. Green isn't exactly the kind of person who you'd want to pass on the street, nor is he the kind of person you'd want to see often on the movie screen (see "Freddy Got Fingered" for a better understanding). But no matter what his faults as an entertainer are, he always has one constant: his level of zany energy is unmatched, even by today's standards. That factor alone makes him an awkward cast for a movie as dry and poor as this one; watching him try to unleash every ounce of his own annoying wackiness is like seeing the Energizer bunny unleash all its battery power on the top of some cold and deserted mountain slope. In both cases, it's better to spend your money watching something a little more productive... and perhaps something a little more amusing.

Author's Note: Although "Stealing Harvard" has been equipped with a PG-13 rating, a lot of its material could and should be considered unsuitable for consumption by those in that age range.