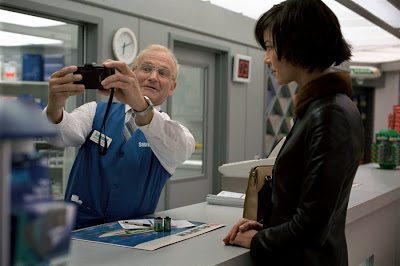 "One Hour Photo" is pitched to the viewer with one of the most inaccurate marketing curves seen in ages, unfortunately; it's not a suspense vehicle as ads would suggest, but rather a sad, somber and deeply thought-provoking little film where isolation tears holes open in the soul of someone who may, or may not, be a very wise and respectable man beneath the quiet public facade. The movie is brilliantly written and directed down to the last frame, inarguably not without its share of creepy moments but so much more intimate than just a standard suspense drama.

The Parrish character that seizes direct focus of the viewer is played brilliantly by Robin Williams, an actor who, after several recent failures in comedy, stumbled on a new niche of creativity with a role in the thriller "Insomnia" earlier this year. Whereas that performance had a very unnerving edge to it, though, the work here doesn't depend primarily on its creepiness factor to get ahead. Minus a few scenes in which the persona is driven to sadistic actions, furthermore, the role is actually more dramatic than anything else, subdued and suggestive down to the last page of the script without demanding the audience to expect anything more or less.

In the story, Parrish is the longtime employee of a small photo processing division inside the local retail center, a vast bargain shop where everyone in town seems to wind up at one point in their daily routines. In all his years of experience, Sy has come to recognize most of his customers by name, particularly the members of the Yorkin household, who embody all the quality traits of the ideal American family through the portraits they develop: Nina (Connie Nielsen), a beautiful young mother, Will (Michael Vartan), a hardworking father, and Jake (Dylan Smith), a curious young boy with a soft spot for people who, like Sy, don't seem to have any friends. To them, Mr. Parrish is simply that nice old guy who develops all of their pictures, sometimes giving them larger prints than what they requested, but beneath the surface he is a lonely and desperate man in search of some kind of acceptance. His indigence, needless to say, is hardly what can be considered healthy, and when we're taken to his spruce little apartment early on in the picture, alarm ensues when we see one of his walls decorated by duplicate copies of all the Yorkin photos developed over the years, each hung almost too precise for words.

The movie wrestles with a lot of these unsettling images during the surge of its brief 98-minute running time, but it doesn't want to pass off as a thriller or anything remotely similar to one. "One Hour Photo" is at the core a character study, and a distinctive one at that, which builds itself through irony and tension but never actually goes through the gate of horror like most other movies would. Romanek's film, furthermore, wields a very bleached and mundane style to emphasize the empty life that Parrish leads both in and out of the workplace, in which sets have the simplistic charisma of a childlike mind, and the cinematography, especially during Sy's informative photo development commentaries, never ceases to suck the characters into the script's vacuum of uncertainty. But these aren't negative qualities in the least; if anything, washed out tone employed by the movie's texture is rather refreshing, especially in a time when even the most dynamic films tend to over-dramatize their exteriors.

Romanek, as most viewers probably know, is widely known for his innovative additions to the music video medium (he even worked with Madonna and Michael Jackson), and though the man is credited with another major motion picture before those small-screen endeavors, he hasn't truly been recognized for his work on a wide scale. This is the movie that will catapult him into the circle of Hollywood's most gifted filmmakers, and in a time when the cinema is starting to wind down and prepare for the onslaught of would-be Oscar hopefuls, it is also one of the most surprisingly brilliant.