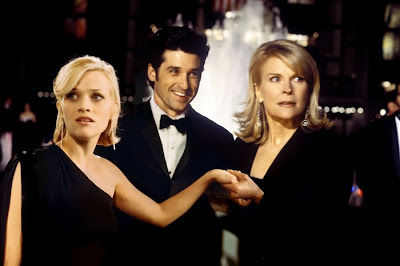 But let's not dwell on a negative here. This is Witherspoon's movie, a vehicle that, like "Legally Blonde" and even "Pleasantville," has a certain rustic charm when it's being orchestrated by her zealous flair. Here, she plays Melanie Carmichael, a rising star in the New York fashion design circuit who, during a crucial early moment, is given a marriage proposal by her rich boyfriend Andrew (Patrick Dempsey), the son of the city's mayor (Candice Bergen). Melanie is swooped into Tiffany's like a queen by her romantic beau, where he insists that she pick whichever engagement ring she wants, but somehow the blond beauty doesn't quite feel comfortable with the whole setup. Later, as revealed when she returns home to Alabama to tell her parents about the engagement, we learn that her worry is actually caused by the fact that she's still married to her first love, the country boy Jake (Josh Lucas). Refusing to grant her the divorce she has wanted for years, Melanie decides to cook up a few schemes to force him into signing the papers. Needless to say, those schemes have outcomes different from what she originally had in mind, the most obvious one being her falling back in love with Jake.

"Sweet Home Alabama"s primary gift is its lead actress, a beautiful and delightful screen gem who always manages to create quirky personas out of standard writing. Her role as the cute but determined sexpot Melanie here is likable on the surface, but finds itself seeped in richness simply based on her delivery. That charm is infectious to her costars as well, namely Josh Lucas as Jake, who taunts and teases his wife to the brink of bitter, but passionate, arguing. Chemistry like that doesn't always work when it's only based on one person's demeanor, but it does here.

Once you subtract Witherspoon from this equation, however, the result is not anything to feel proud of. Incredibly aloof and cliché-ridden down to the roots, "Sweet Home Alabama" is the latest in a long line of romance comedies where the plot devices dangle primarily on the audience being able to take insult after insult without feeling any shred of offense. The movie's formula, a cheap throwback to the old romantic comedies of Doris Day and Rock Hudson, looks and feels contrived down to the smallest chords (how many movies must we see that glorify old southern towns at the expense of big cities?), while the supporting players lack almost all recognizable signs of individuality. Even Melanie's two suitors, Andrew and Jake, are barely rendered conscious through the lazy material. Only Ethan Embry, playing Melanie's friend Bobby Ray, has a somewhat distinctive role, as a local boy who is still trying to keep his deep dark secrets in the closet.

Somehow, someway, it's all still tolerable in the end for Witherspoon's vibrant flair. That doesn't make "Sweet Home Alabama" any more of a quality product for the viewer to endure, but it does, perhaps, make it a lot more tolerable than it might have been had the role fallen into the lap of a less capable actress.