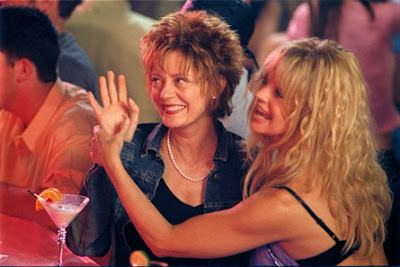 The movie is the directorial debut for Bob Dolman, a man who up to this point has only supplied the story to the movie "Far and Away" and contributed writing to the cult-favorite Ron Howard fantasy "Willow." His efforts here as both the movie's top scribe as well as the man behind the camera clearly identify two separate personal flairs, although each of them are usually at war with each other over valuable screen time. When the movie's direction has great rhythm and cohesion, it finds itself being speed-bumped by rather ridiculous writing. The solid parts of the narrative, likewise, are undermined by a sluggish sense of pacing. It's all quite a mysterious experience to endure, having the effect of listening to a song at two different speeds at once as they struggle to meet up with one another. But this shouldn't give the impression that "The Banger Sisters" is a completely bad movie; there is some very strong substance here, even though it is usually presented with rocky distinction.

The story is about Suzette (Hawn) and Lavinia (Sarandon), two former friends who grew up in one of the richest eras for American music. Hanging out in mosh pits and getting close to musicians such as Jim Morrison following their live shows, we're told that both women were perhaps the most popular groupies of their area, a low-rent district somewhere in Southern California. They were given the nickname of the "Banger Sisters" and reveled in all the common habits of their scene during the late 60s and early 70s: doing drugs, sleeping around, breaking the rules and ignoring the reality around them. Such an attitude, however, eventually caught up with Lavinia (who went by "Vinnie" in those days), and eventually when the two friends parted ways, she went off to live a productive life while Suzette stayed behind to continue the tradition.

Alas, every party has to come to an end, and when the film opens, we watch on as Suzette is fired from the music bar she has worked at for years, bringing the cycle of the Banger sisters likely to its last destination. Suzette utilizes the layoff, at least, to reconnect with her old gal pal, and the next day she gets in her old beat-up car to pop in on Vinnie down in Phoenix. Halfway through the journey, she comes across Harry (Geoffrey Rush), a failed Hollywood screenwriter who offers to pay for her tank of gas if she agrees to take him to Phoenix with her. His excuse: "I'm going back to Phoenix to kill my father. He ruined my life."

In the meantime, we're invited in on Lavinia's new life as the wife of an aspiring politician, a happy little homemaker with two teenage daughters, a gigantic desert estate, and a closet of boring beige clothes at her disposal.Her life appears happy but hollow, and Suzette immediately picks up on that notion when she reaches her old friend's new home. The flaky blond would like nothing more than to rescue good old Vinnie from this cramp lifestyle, but the former groupie isn't interested in the least; in fact, when the two come face to face for the first time since their separation years ago, her first solution is to pay Suzette off to leave and never come back, fearing her influence would disrupt the life she has worked so hard for. The bigger conflict: her current family has no idea that she was one of the infamous Banger Sisters.

The movie's most pivotal virtue isn't the writing or directing, but rather the acting. Both Sarandon and Hawn have some of the best on-screen chemistry seen by a pair of best lady buds since, well, Lucy and Ethel. They work profusely off of one another and never give in to the temptation of a clichéd buddy movie friendship; even when Vinnie's family seems to fall apart at the seems because of Suzette's flashy presence, her dear old bud is there to side with her. Of course, the picture tries its darndest to abandon the friendship in favor of a great big family reconciliation in the end, but that is thankfully one of the few obstacles that "The Banger Sisters" decides to overcome.

When you arrive at other elements of the film, however, not everything is nearly as worthwhile. The screenplay, to begin with, has some serious subplot issues, creating all these separate story arcs for each of the women in order to build their own personal development beyond the central friendship. What's irritating is that none of these other stories is even remotely amusing; no, not even the one involving Rush's character, who lives his life on a highly calculated basis until Suzette crashes through the doors and turns it topsy-turvy (and the fact that Suzette's original intent on finding Vinnie was to get money out of her is an idea abandoned very early). Vinnie's relationship with her two daughters, meanwhile, feels utterly transparent since she's essentially fighting an uphill battle with their snotty, crude and ungrateful attitudes throughout the entire running time. And Vinnie, as it turns out, doesn't really have the seeds in her to be a strong and demanding mother figure; when she catches one of her daughters getting it on with a boy in their own pool, her solution is to turn the hose on them, verbally disapprove of her actions... and nothing else!

Look, this isn't one of those magnificent and stylish role reversal buddy flicks that you'd come to expect from the movie's marketing campaign. Truth is, the movie is glossy and charming without actually being very specific with its goals (or funny, for that matter). Those who can stand the mere presence of both the leads won't find this to be much of a problem, but then again, what point is there to a film about friendship when you don't have a clue as to where the friendship should actually go?

Comedy (US); Rated R for language, sexual content and some drug use; Running Time - 97 Minutes