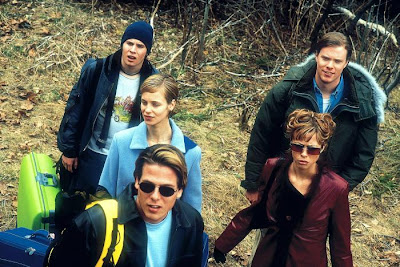 To be fair, the result of endless formula rehashing might have inspired an interesting result had anyone involved looked at the idea with any kind of humor or heart. But "My Little Eye" doesn't care about any of that; it is an embarrassment to the definition of movie horror, a picture without backbone, vision or focus, exercised by its own unhealthy obsession with narrative backpedaling. No one here is actually watching a film as much as they're watching a filmed strategy, and though the premise may exhibit desire for developing on that, it all veers off the map of plausibility. Not only does the movie fail to make us part of its reality, it fails the most basic relevancy test as well.

The film opens with an ominous message spreading to the farthest reaches of cyberspace—-if you would like to earn a million dollars, you can do so by agreeing to spend six months in a house with four other strangers while cameras broadcast your experience on the Internet. The catch—if anyone leaves the house, no one gets the money. We then see five faces from audition videos scrawl across the screen, their ambitious faces trying to explain why they should be selected to live in this "Big Brother"-style environment (typical excuse: "I want the money," or "I want to be famous"). The five are then seen climbing a snowcapped hill to their destination: an old rickety house out in the middle of nowhere, almost as cold on the inside as out. They joke about the scenario, then enter the building, waiting for their lives to get underway for the cameras.

And then the movie suddenly jumps six months into the game... or at least I think it does. During a recent press screening for the film, an uninformed theater employee started up the movie projector a half hour before scheduled show time, right before being asked by the studio representative to halt it just beyond the introductory sequences. Thirty minutes later, the projector started right back up, as scheduled, but it almost seemed as if a good chunk of film between the first and second launches had been skipped over (timing the clock with the intended running time suggests, however, that only about five minutes of film were probably not seen). Do the five characters say anything significant in that potentially overlooked segment of celluloid? Is there any crucial twist that we miss? Probably not. But in any case, we're left with the feeling that we've severely missed something—the movie lacks a substantial setup beyond name introductions, and it throws everyone right into the middle of the dilemma before the characters even seem to realize they're in one.

But what exactly is the dilemma, you ask? The answer remains sketchy at best. In the first half hour, "My Little Eye" shows us five ordinary human beings—two women, three men—who are just as clueless about things as we are. They talk about their lives (briefly), and remark about how creepy the house is. They hear strange noises in the attic. They get odd packages left at their doorstep, and notes addressed to specific house contestants are delivered, containing information that not even the producers of this particular reality show should be able to know. Eventually, after weighing the amount of irony and coincidence that has accompanied them to this place, the house mates finally realize that what they have been caught up in may not be the innocent reality webcast that they were told it would be. But should they leave because of that fear? After all, the prize is still a million dollars, which is a lot of cash to abandon simply because someone fears what may or may not even happen out there.

The movie was shot in Nova Scotia, a place that, like Georgetown and Burkittsville, will no doubt be bombarded by horror devotees in the near future who would like to catch a glimpse of sites that appear in the film (although I'm doubtful that anyone who seeks something out up there will actually be doing so because they thought the movie was good enough to warrant a trip). In fairness, director Marc Evans chooses the ideal setting for this sort of hysteria to manifest, but he fails to establish a tolerable sense of camerawork for it to actually pulsate (having web cams staggered on the property line is an acceptable gimmick, but who honestly believes that these cameras can always maintain a clear and focused picture when it's snowing like mad outside?). The script, meanwhile, stutters wildly around like it has no bowel control, throwing out idea after idea without realizing just how often they've been seen before. Even the "reality television" element of the screenplay, obviously used to provide the material with a modern twist, is badly implored here; trite, unskilled and obviously dramatized, it winds up feeling almost as synthetic as actual reality shows do.

The ending of the movie is so bad that it warrants not one but two groans of displeasure, the first after a character reveals the truth of the situation, the second in response to a moment when the supposed villain looks onto his victim and then becomes the victim of a predictably bloody fate himself. The resolution is amateurish and rushed, yes, but that's just a surface scratch—-it insults us on an intellectual level as well by suggesting that we don't carry enough logic around to actually understand what's going on at that point, even when it was spelled out for us long before an ending was in sight. Now that I think about it, maybe seeing the antagonist's brains being blown out during the final moment of shock is not so bad after all. At least it means he or she won't have to treat the viewer like an idiot again.