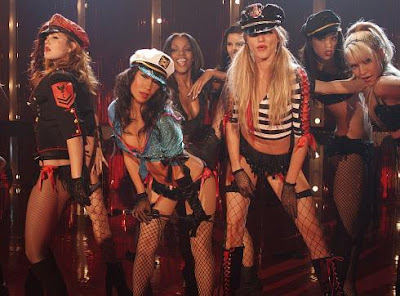 The second "Charlie's Angels" film—subtitled "Full Throttle" for some reason that is never fully explained—opens in the snowcapped region of Mongolia, where our three female heroes are on a mission to rescue a U.S. government official named Ray Carter (Robert Patrick) from a hostage situation. While Alex (Liu) pops into the dungeon to bust a few moves before releasing the necessary prisoner, her two partners wait patiently in the above bar, Natalie (Diaz) distracting the room's men-filled crowd by riding a mechanical bull in a short fur coat while speaking in a German accent. Unfortunately, her appealing diversion does little help when Alex and the released man come crashing through the floor, and the Angels are sent hurling through nearby windows in order to escape thousands of rounds of ammunition (how they never cut or injure themselves during the fall, I dunno). Almost home free, they jump into a storage vehicle and start speeding down the road above a large dam, only to veer the automobile off of it and into the raging waters below after rockets are fired at them from both directions. Needless to say, the Angels—and their rescued individual—escape death at the last moment, by clinging on to a nearby plummeting jet and starting its engines up just moments before it is supposed to hit the water. "I'm afraid I underestimated you girls," Mr. Carter says in a surprising tone following the events. "Yeah, that happens a lot," one of the girls replies.

This entire sequence, built up with over-the-top stunt work that is neither exciting nor comical, outlines the essence of "Charlie's Angels: Full Throttle" like an annoying ripple that refuses to die. Not just a gimmick to catch the actresses in all sorts of sexy poses, it is a labored mess of an idea so endlessly obsessed with campy imagery that it makes the action scenes of the last James Bond flick seem tolerable. The girls themselves, furthermore, walk, talk and behave during this process like American versions of the Spice Girls, only far less interesting. Combining their dimwitted presence with the laughable sense of action, the result is a movie far worse than even its predecessor was, a stagnant collage of scenes that assault the eyes, ears and mind without actually being very entertaining in the process.

To be fair, this level of ineptitude could not have been achieved as easily without the help of a considerably dimwitted narrative. Once the Angels have made a successful return from the Mongolian mission, Charlie informs his girls that their recent rescue is actually part of a much bigger plot against the U.S. Government, a plot involving two platinum rings (yes, rings!) that contain all the information on people in the Witness Protection Program. Apart, these rings have no use to anyone, but once together, they open up the databank of information that major crime families would simply love to get their hands on, and likely at any price. The assignment: the Angels have just a few short hours to piece together the recent disappearance of these rings, locate them and then return them to the government before that very secretive list is sold off to the highest bidders.

Their first order of business is to locate a hit-man who has been hired to take out specific members on this list. By doing so, however, the movie requires our three lovely heroines to at first stake out a beach, allowing them to gawk at all sorts of wet and hard bodies before figuring out who exactly is behind the recent deaths. In the process, leading up to a laughably bad motorcycle race that actually features the baddie turning 180 degrees around on his bike in midair to fire two handguns, the girls get to dress up in all sorts of wild and crazy disguises. Some of them are necessary for a movie with lots of sexual energy—consider Barrymore's trashy biker-chick look, for instance—but others are simply there to provide the actresses with an excuse to play dress-up. It's also remarkable, furthermore, how women like this can manage to get into so much trouble in just 106 minutes without ever seeming to mess up their hair or smudge their makeup in the process. They get shot at, kicked, punched, thrown through glass and smacked against brick walls, but they always come off the injuries looking like flawless supermodels. A suggestion for the title of the next movie in this franchise: "Charlie's Angels: Revlon's Revenge."

Where the story goes with this approach is irrelevant; the movie doesn't even care about plot long enough to even know the meaning of the word. We get a vague outline of the necessary tasks, of course, but the script muddles them behind everything else. Half of the time, we aren't even sure what the purpose is to specific character introductions; we sense that they have some bearing to the central conflict regarding the rings, yes, but their connection is never really established (such as the Thin Man, a whack job played by Crispin Glover who shows up briefly in three or four scenes to smell locks of Barrymore's hair). Some of them, furthermore, emerge merely to provide the heroines with some sort of dangerous sexual distraction, like Seamus O'Grady (Justin Theroux), a man with a connection to the Barrymore character who wants them all dead but spends many of his early battle scenes shirtless and sweaty, apparently for no other purpose other than to arouse.

For an endeavor so fueled by adrenaline, the movie also doesn't clearly know what path to follow—should it deliberately embrace the over-the-top sense of action for the sake of pure visual excitement, or should it suspend everything and concentrate specifically on the comedic aspect of it all? Neither standpoint is able to compliment the other, and on individual terms they're rather cheaply realized, too. There is a scene towards the end when our three turn the tables on the villain (a person whom I will not identify here even though there is a great temptation to), and he or she winds up plummeting into a deathtrap completely walled by fire. "Go to hell," one of the girls mutters victoriously. If she does, though, won't she have a much better time there than having to sit through this mess?