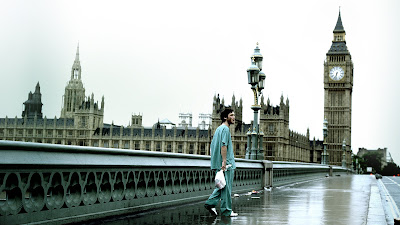 Despite the terrifying warnings, the cage doors swing open, apes begin to violently attack the humans, and the movie sets a horrifying reality into motion. Mere days later, a confined blood virus spreads almost effortlessly across the planet; human error results in global hysteria, hysteria is followed by outbreak, outbreak leads to evacuations, and evacuations leave the world in utter devastation. 28 days, the movie reminds us, is all it takes for this powerful thing to bring humanity to its knees, but not necessarily in the way one would assume. This isn't one of those viruses that infects and then kills its host; rather, it is one that turns its victims into vile, bloodthirsty zombie-like creatures incapable of ordinary human reasoning. It would be one thing for a movie to simply sacrifice the infected to death, but it is something else entirely to see them become fearsome enemies themselves, walking vacant streets and overrunning cities looking for unaffected human flesh to feed off of. Unlike what the premise instigates, this isn't one of those campy science fiction B-movies with mindless zombies marching around, either. Instead, it is pure horror film, startling, haunting and merciless like some of the greatest of the genre, pitting its heroes into a reality where the true terror sneaks up on them without anyone expecting it to.

Following the flashy and bloody introduction that sets off the chain reaction to follow, we meet Jim (Cillian Murphy), a man who wakes up in a London hospital only to find the city virtually empty. In stellar camera shots featuring him wandering over bridges and into littered alleys looking for any sign of life, it becomes apparent that whatever happened to the world while he was lying in a hospital bed was catastrophic. More so, it seems apparent that his own accident may have actually been a miracle in disguise, as it also has saved him from whatever terror has ravaged the world around. But that world becomes even more startling to him when he wanders into a nearby cathedral and is discovered by crowds of rabid men and women, who charge at him like animals in need of live meat.

Then we get introduced to Selena (Naomie Harris) and Mark (Noah Huntley), two cautious and uninfected rebels of the "rage" outbreak who rescue Jim just as he is about to become one of the zombies himself. In great detail, they recall the events in the past 28 days, explaining to their new acquaintance how this deadly disease can be passed on to new hosts simply by an infected individual biting or scratching them until blood is transmitted. Not such good news to a man who has just come out of a deep sleep to find his world shattered, but that's merely a surface detail. The catch: the disease also takes effect in new hosts between 20 and 30 seconds after contact, which leaves but a small window of time to slay or escape the impending danger. Mark, alas, becomes Jim's visual aid to this dilemma when he gets snared by one of the bloodthirsty zombies, and after Selena is forced to kill him, she warns Jim that she won't think twice about doing the same to him should he fall to the same fate.

Amidst this terribly bleak outlook, however, hope of salvation starts to grow. Jim and Selena find more survivors in the city, and the group abandons the dangerous metropolis to disappear into the countryside, where an emergency radio broadcast promising safety from the disease is apparently originating. None of them know what to expect on their voyage, but they surely don't count on finding a considerably more bleak reality when they finally wander into the area of active military forces, led by Major Henry West (Christopher Eccleston), a man who believes the world's devastation is merely a dramatized pattern of man's nature to kill and be killed.

Filmed mostly with digital cameras, "28 Days Later" adopts the kind of gritty and fierce look that makes even the most ridiculous situations seem plausible. For the first time in perhaps decades, movie zombies come off here not as placid plot devices, but genuinely creepy villains, captured at angles that not only make them look and act menacing, but also examine the internal suffering that forces them to behave in this terrifying manner. They don't even act like traditional zombies, either; they have quick reflexes and react instantly to sound and sight, seeking out their prey more like hungry wild animals rather than rabid humans. In the process of searching for a visual gimmick to test his audience's stamina, director Danny Boyle ("Trainspotting") has also discovered a being almost equally as startling as Ridley Scott's Alien.

The script by Alex Garland magnifies those scares to other areas of the film left untouched by the camerawork. The movie works not just because it believes the events are possible, but also because it understands the human mindset in such a terrifying scenario. Garland's story never fails to sympathize with its characters, even at their most blatantly viscous; it knows that such behaviors are probably only natural reactions to the decaying reality around them, and that in itself is perhaps more terrifying than anything a flesh-eating zombie can physically do to you. His script is also able to draw fabulous performances from its stars, who truly seem to immerse themselves in the material as if they understand it. Both Murphy and Harris are riveting as survivors whose world is abruptly—and unfairly—turned into a living nightmare, while Brendan Gleeson is fabulous as a protective father to his young untouched daughter, especially in a scene when infected blood accidentally spills into his system while she stands there unaware of the oncoming transformation.

Whether there is a positive outcome to all these events is an irrelevant issue, because the movie isn't about correcting or shunning what has gone wrong. It is a film about understanding human nature and human error, about knowing where to go and what to do with each other after the most basic securities have so swiftly been ripped away. To that effect, the movie in unflinching in its delivery; it embodies the essence of true movie horror by tormenting both the eyes and the mind with continuous terror. "28 Days Later" isn't just one of the most effective movies of the year, but also one of the most unsettling and disturbing films of its genre: a true reminder of what being scared is all about.