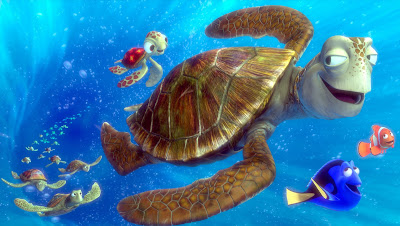 Pixar's legacy in digital animation thrives at the notion of giving a pertinent voice to offbeat subjects like this. Think for a moment about the wonders these artistic geniuses have done for toys, bugs, and even monsters in a closet: things that have relevance in the life of a youngster but aren't ordinarily looked at with seriousness beyond a certain age. "Finding Nemo," like its nearest cousins, treats its charming little characters in the same behavior that most children do, with the prospect that small and seemingly insignificant beings can talk, socially interact, and lead productive lives even among a world of unsuspecting human neighbors. The movie also offers the fiercest of realities so far in the studio's line of kid-friendly subjects, a frontal confrontation with sea-ridden angst that knows there is always something darker lurking beyond the brightest borders of a pretty picture.

The movie is primarily about two clownfish—Marlin (Albert Brooks), a father and cautious observer, and Nemo (Alexander Gould), his son and only living spawn, who was born with one fin smaller than the other and is wide-eyed about all the potential adventures lurking around in the sea. At the start of the film, however, Nemo is nothing more than just an egg, left behind after thousands of his unhatched brothers and sisters (not to mention mother) are viscously swallowed up by a pack of barracudas. Marlin is thus overprotective of his son, even when Nemo insists that it's time for him to leave the nest and start going off into school with all the other young fish. Dear old dad is hesitant ("why can't you just wait another year?", he asks cautiously), but eventually he gives in.

Unfortunately, Marlin's worry is in severe overdrive right from the first moment Nemo steps into the community reef, which only fuels the little tyke's need to show his father that he's "not just a little baby anymore." New fish friends dare him to go off the reef and swim up to a boat anchored nearby at the surface. When he does, alas, a scuba diver catches him and hauls him off to Australia, where he winds up in a dentist office fish tank. Tormented by guilt and sadness, his father begins a long and perilous journey to find his son and bring him back home, no matter what the obstacles may be (and for a tropical fish, you know they have to be significant).

Shortly into his rigorous quest, Marlin comes across Dory (Ellen DeGeneres), a blue tang with short-term memory loss (thing "Memento" of the sea) whose simple way of looking at things does more than just frustrate the anxious clownfish. She tags along for the search, apparently being the only fish in the sea who can read the address on a pair of goggles left behind by the fish napper. Together, they navigate through a ferocious horde of deadly jellyfish, ride the swift east Australian current with a bunch of turtles who talk like surfers, and even get befriended by three ferocious sharks, who have resolved not to eat meat and have started a support group to maintain that promise (although an accident in which Dory accidentally spills blood into the water is more than enough to set one of them back off).

The core detail to "Finding Nemo" lies in is its strong and mature father/son relationship, but the script also doesn't forget that it's mass audience is kids, either. In that regard, the movie is chock-full of color and fun, ambitiously gliding through one vibrant scene after another as it reveals an engaging and beautiful world in which the smallest creature can become bigger than life. There are whales, dozens of other species of fish, reptiles, anemones, sting rays, deep-sea creatures, and even pelicans, birds whom are considered to be the fish's worst enemy but can generally be helpful to those in need (especially when dimwitted seagulls are involved).

On the flip side, however, the movie is also a lot more serious than one would normally expect (at least aside from the obligatory adult in-jokes, which have become a staple of PIXAR's cinematic features). If dangers do indeed lurk around every corner and in nearly every speck of sand in the wide-open sea, then "Finding Nemo" finds them all seemingly without trying very hard. The opening tragedy echoes the heart-wrenching death of Bambi's mother, while the adventure between Dory and Marlin gets plagued by near-death experiences, bouts with fearsome predators (the sharks themselves, for instance, never seem to emerge as the friends of fish they try so hard to be), close calls with large mammals, and ultimately desperate battles with humans, who net thousands of innocent sea beings day after day on fishing boats and don't even seem to care. It's a wonder that little Nemo even survives the trip to the aquarium, but the fact that he does means he has a chance to survive... As long as he escapes before the dentist's frightening little niece Darla comes to collect her "present" (a girl, Nemo's aquarium friends inform him, who is famous for making fish turn upside down in plastic bags by shaking them uncontrollably).

No, this is not the completely cutesy sea caper that parents will expect after seeing trailers and television spots; this is not a movie along the lines of "Toy Story" or even "Monsters, Inc." in terms of moral simplicity or innocence. This is a movie with a little more challenge and punch. Does that make it unsuitable for younger kids? Not entirely, but it's unfair to assume that even the bravest lad will walk away from the endeavor not phased in the least by any of the more sinister undertones. But hey, any idiot could tell you that's the law of the ocean, and "Finding Nemo" bravely realizes this while simultaneously contributing to an adventure seeped in energy and charm for both the little and big members of the audience.