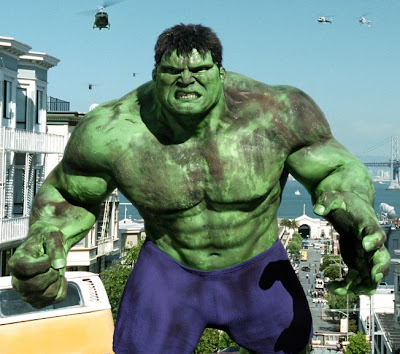 With a premise like this at his heels, Lee sets the stage for an interesting—if overlong—excursion into the material. Our story opens years in the past, as a scientist, ready to test out some sort of performance enhancer, is quickly and sternly instructed by his military oversight to abandon his rebellious experiments. Unfortunately, completely fixated on the need to test the results, Mr. Banner injects himself with the serum, a combination of bizarre natural and artificial ingredients that is seen being hastily prepared during the film's opening credits. Banner experiences no kind of apparent change in his physical or mental state upon an injection, but he fears much more when his own wife becomes pregnant and later gives birth to a son, a child who apparently carries the potentially-dangerous modified genes of his crazed father.

Years later, the kid has grown into a reputable and normal guy named Bruce Banner (Eric Bana), a bright individual who has no specific memories of either of his natural parents (both of whom do a quick disappearing act earlier in the movie). Unaware of what his own father did for a living, Bruce himself has become a scientist of sorts too, partnered with the beautiful Betty Ross (Jennifer Connelly) on an experiment that involves modifying living organisms through radiation in order to boost their rate of physical recovery from injury. Their work, alas, is obstructed by not one but two formidable oppositions: 1) a problem with the actual formula that results in the live test subjects exploding; and 2) an outside investor named Glen () who would be happy to scoop Bruce's formula if it promised him fame and fortune. When Banner attempts to resolve the first of these issues, however, he accidentally gets caught in the radiation field. It does not kill him as expected, however; instead, it magnifies the interior changes that have been with him since his birth, changes that turn him into a giant green hulk every time he is confronted with some kind of emotional stress. It doesn't help matters, furthermore, that his father (now played by Nick Nolte) shows back up in town at just the right time to see his son's evolution into a beast.

The movie works well as pure character study, but the experience is also elevated by Lee's sense of visual craftsmanship. Aside from the director's elaborate wide-viewed establishing shots, which have been an accepted staple of his as far back as "The Ice Storm," his slick editing tricks here are stylized like still images from actual comic books, sometimes blending camera shots in a detailed visual overlap that allows older frames to seemingly dissolve into newer ones. If the pop-art technique of comic books has long intended to be seen on more than just colored pages, then Lee has introduced what may very well be the standard for all future entries into this sub-genre of filmmaking.

As for the special effects themselves, however, the movie has some significant difficulty in maintaining its sense of authenticity. Many of the movie's earlier computer-generated images are at least plausible, but that may be due to the fact that many of them are shot almost entirely in the dark, a detail that tends to hide the limits of most visual effects artists even at a time when technology can create almost anything. Once the CGI action moves into the daytime, like in a sequence involving the Hulk facing off against the government's military forces, we are no longer watching a movie—we are being assaulted by a cartoon. Moreover, the scenes are ridiculously over-the-top and endless (do we really need to see this jolly green giant leap his way from the Grand Canyon to San Francisco in just a few minutes?), and moments of potentially-effective tension get flattened by the movie's incessant failure to operate inside lines of plausibility. It's not enough that the Hulk himself looks and feels digital; if he is also thrown into an environment that does not deservingly subject him to the laws of reality, how can we possibly accept him as a worthy participant to this otherwise-genuine film?

When it comes to the screenplay, Lee has assembled a team of writers that know exactly how to produce a solid and consistently-engaging story about a man whose mutation may or may not be a blessing in disguise. Does it all have a payoff, though? Not really, at least when you consider the film's labored last 15 minutes, in which Bruce confronts his father after he himself undergoes the radiation transformation. The film also contains several irrelevant isolated scenes—some of them exist merely to show off the movie's sense of visual style—but on the whole they generally don't detract from the movie's high points. "Hulk" is a fascinating and well-acted entry into the world of Marvel Comic characters on the big screen, and though it is saddled with some major problems both internal and external, there is no denying its effectiveness as an in-depth analysis of man's failure to allow mere nature to dictate human evolution.