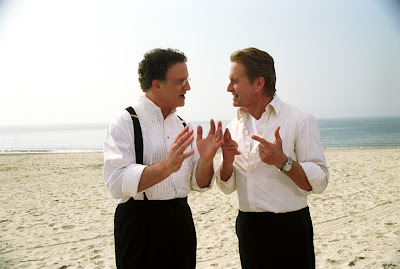 Steve, of course, is the spy in question, and his son, Mark (Ryan Reynolds), is engaged to be married to a lovely girl. Steve wouldn't actually know that, though, unless he was specifically told, because he's always on the run doing odd jobs across the globe for a secret contact in the C.I.A. In fact, dear old dad is so far out of the ringer that his son actually has to schedule a dinner meeting in order to introduce him to the bride's family. Will he even show up, though, considering his "busy" schedule? The movie says yes, although it predictably makes him very late in the process.

The bride's family consists of ordinaries—something Steve himself is considerably not—but he immediately gets attached to the bride's father Jerry (Albert Brooks), a significantly opposite character who is quiet, reserved, conservative, and generally paranoid at the slightest hint of drama (in other words, the standard Albert Brooks character). During their night out at a restaurant, however, Steve gets spotted by an enemy and is cornered in a restroom stall just as Jerry comes in to use it. Because he has now "seen and heard too much," so to speak, this provides Mr. Tobias with the excuse to include his future in-law in all sorts of dangerous and last-minute spy games, including stealing Barbara Streisand's private jet, playing ally with a gay drug dealer, and parachuting off a high-rise at night into crowded city streets after being cornered by uninformed federal agents. Jerry's problem with this topsy-turvy stuff, however, is not directly about being part of these dangerous stunts, buy about Steve's incentive to do them. After all, is he really what he says he is? Does his own son even care? And what exactly makes him think he is capable of earning his future in-law's respect with this kind of dangerous demeanor?

"The In-Laws" is saddled with a lot of problems, but the most damaging lies in character interaction. Though the movie initially has the impression that it is going to be about significantly different families coping with their potential relations, it actually forgets that families are even involved. Steve and Jerry share the screen not like participants in an ensemble, but like mismatched costars in some would-be buddy film, lacking even the smallest morsel of essential chemistry. This takes any and all attention away from potentially more amusing characters, like Michael's ex-wife Judy (Candice Bergen), a frumpy woman who claims to loath her son's father but confesses that they always had "great and wild" sex when they were together (and the scene in which she ambitiously describes it is one of the picture's redeemable moments). Even the villains of the picture have more presence than either Brooks or Douglas, but the movie doesn't care enough about them to increase their time on screen either. The biggest irony is that the movie is centered around impending nuptials, but both bride and groom spend a substantial amount of air time as mere background players. In fact, it isn't even until the resolution arrives that they actually feel like contributing players rather than dead weight.

Though the humor is admittedly vapid throughout the endeavor, there are occasional moments when chuckles are warranted. A scene when Jerry goes into the bathroom aboard Streisand's private jet and finds a phone, a sound system that plays "The Way We Were" and a drawer full of nail polish is a bit amusing, and another when the leader of a drug ring makes a move on him while he's in a hot tub wearing nothing but a G-string is shockingly hilarious. But where in the world were the minds of these screenwriters? How could they honestly release anything in this kind of shape? Like so many other recent mediocre entries into this genre, "The In-Laws" plays like it was pieced together from a rough draft script, most ideas not fully developed and pages in an incorrect order.