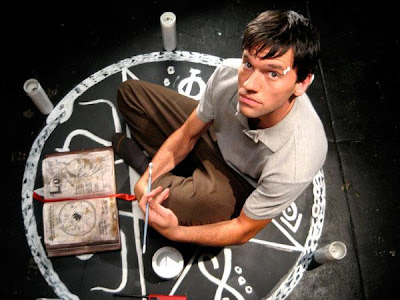 Sometimes it makes more sense to let go than to pursue that which is out of reach. Justin (Ward Roberts) could have used such a lesson long before the opening of “Lo,” when his quirky relationship with an enigmatic girl named April (Sarah Lassez) reached a fever pitch before ending under very unfathomable circumstances. What halted their ill-fated nuptials is only one of many minor points of backstory in a flashback-minded movie, but this much is key: the mysterious book she left behind becomes an important link to her current whereabouts, and it allows a door to open that only the most dedicated ex-boyfriend would dare step through. That, or the most naïve.

What an odd but alluring movie this is. Directed by Travis Betz, a relatively obscure filmmaker of recent times, “Lo” tells the story of a peculiar romance between two seemingly likeable and simple lovers that is abruptly closed by very shadowy circumstances. Ah, but perhaps I’m being too coy here with details – the reasons, in truth, are supernatural, and very much the kind that would cause any sensible person to count their blessings. Sweet little April, it turns out, isn’t just your average girl next door: she is a demon. And when her fellow demons, I guess, catch wind that she is above ground living an ordinary existence amongst human beings, they inexplicably yank her back into their realm. And to think that hell’s minions are so insolent as to not even allow for proper goodbyes first.

The movie opens with the Justin character perusing that cryptic tome as if on some important mission. Seated at the center of a pentagram etched into the wood floor, his room is scarcely lit by a cluster of candles, though the majority of the light seems to originate from an unknown source. After a quick ritual that breaks an eerie silence with a devastating macabre shriek, a presence makes itself known to the nervous guy: a lowly demon named Lo (Jeremiah Birkett), who looks less like a servant of hell and more like a crawling pile of gray goop with eyes. He does, however, have personality – and when Justin demands to be shown the whereabouts of his absent girlfriend, he responds with hesitance laced with a biting sarcasm.

But wait, there’s more. Lo proceeds in adopting a persona of guidance much like the ghosts of “A Christmas Carol,” in which memories between April and Justin manifest for the benefit of his own reflection (and our neurotic need to, you know, understand their past). These scenes are given the appearance of an amateur stage play, with all the flimsy sets and over-the-top lighting that anyone in a college theater troupe would stare at with certain nostalgia. The Justin character, meanwhile, remains seated at the center of vague traces of light amidst a darkened room, confident that he will be able to convince the beckoned fiend to bring forth the love of his life, though unprepared for all the curve balls Lo is capable of throwing at him – including the insistence that Justin is simply not prepared to know the truth.

Betz’s own inspiration for “Lo” is clear – an often forgotten (but rather effective) fantasy from the mid-90s called “Faust.” Like this movie, that obscure indie from the Czech Republic too used the concept of a stage play mechanism to frame most of its themes, though “Faust” was more direct an assault as opposed to the more humorous approach utilized here. The method in both, I think, comes down to the need of the director to rob his story elements of any possible fanfare so that they can play out in a static environment – almost a necessity really, if you consider how over-the-top the subject matter has the potential to be if allowed on an overzealous canvas. Betz, moreover, is not caught up in a misplaced desire to take his ideas beyond a realm that warrants them, and by executing scenes with only absurd set pieces and harsh pointed light as tools to propel the narrative, he keeps the material in plausible range. My favorite sequence: Justin’s impatience with knowing April’s whereabouts becomes a vulgar tirade against Lo, forcing his hand to reveal the missing girlfriend’s true whereabouts and ultimate identity. We suspect we know where it all leads, but Justin does not, and the effect of the final realization is intensified by the dimness of the setting.

Unfortunately, the movie is so effective with the minimalism technique that it almost feels displaced in this format. I suspect I would have liked the result a lot better if I had been watching it on stage rather than on screen, and in robbing the characters of any sense of cinema-bound freedom of space it creates an uncomfortable paradox. Movies (or at least good ones) encourage their audience to wonder what is beyond the frame, whereas stage productions are succinct and established by comfortable borders. Nowhere in “Lo” do you get the sense that a world exists outside of the persistent shadows, and the result is claustrophobic.

All the same, there is undeniable charm at work throughout “Lo,” which rushes right into a story with minimal fuss and is able to answer all its questions and establish solid enough groundwork for a plausible conclusion in just 80 minutes. Betz’ dealings with the upper ranks of Hollywood may be far from being within grasp, but a director who knows what he wants – and pursues it without compromising the vision – has planted seeds that will serve him well in whatever tier of moviemaking he aspires for. Think of how ambitious and unique a Hollywood blockbuster would be with him at the helm. No doubt some of our most well-known filmmakers would be in awe of the distinctive tactics he would bring to the table.