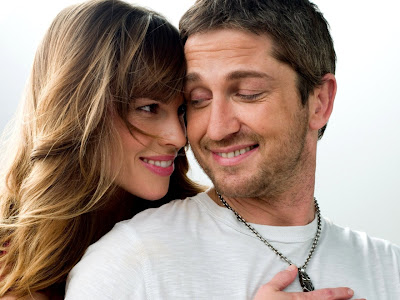 The first sign that “P.S. – I Love You” is headed towards meltdown emerges not 15 minutes after the movie opens, in a bar scene where a priest is offering words of condolence at the memorial service of a recently-deceased Irish bloke named Gerry (Gerard Butler). His friends biting back tears, his widow on the brink of an emotional collapse, the tender moment is interrupted jarringly by an Irish folk song playing in the background, and the priest begins to recite the not-so-clean lyrics that accompany it. It is not a moment we are unfamiliar with in any regards: long established in the likes of “Patch Adams,” “Dead Poets Society,” “Love, Actually” and countless other melodramas, it is an approach that not only lacks tact, but also the genuine perspective on ordinary human reactions. For a movie to so casually unleash something heart-wrenching and sappy, only to have the grief of credulous audiences blind-sighted by a moment that becomes shrill in the way it adjusts moods with just a flick of a character’s tongue, is despicably contrived. The idea that we could be dealing with something so obvious after so many failed attempts across our cinematic time table is almost as infuriating as the result itself.

The movie has to be seen to be believed. It is a shameless and aggravating mess in every sense of the word, lame in the way it wants to emerge as candid, and cringe-inducing in all its attempts to play coy with narrative twists and coincidences. I hated every calculated second of it with a passion. And that’s an extremely disheartening prospect, especially when one considers just how much talent has been perched onto the screen with this vehicle. Not content to merely exploit the talent of the lovely Hilary Swank, the movie also features, among others, Kathy Bates, Lisa Kudrow and Gina Gershon, all very capable screen personalities. Even Gerard Butler – whose career has yet to see any obvious home run – has a certain movie star appeal worthy of the most ambitious of screenplays. What were any of them thinking when they signed onto this utterly joyless endeavor? Perhaps they were ensnared by the same trap that has a hold on the intended audience, which requires us to relinquish all normal brain capacity for a story that masks disingenuous plotting with illusions of touching tragedy interlaced with poignant comedy.

The main character is Holly (Swank), a headstrong but insecure sort who, in the opening moments of the picture, rushes into her apartment with apparent friction towards her husband, the calm and cheerful Gerry (Butler). A verbal exchange of scorn ensues, predominantly on her end. Then the two embrace in a moment of realization, and Holly wonders out loud (conveniently, of course) about how difficult life would be without a man as patient as him there to put up with her randomized shenanigans. Obvious foreshadowing aside, the movie answers that question quite abruptly: in the next scene, Gerry is dead as a result of brain cancer, leaving behind a devastated assemblage of family and friends, including in-laws who saw him as more than a beloved relative by marriage. And why wouldn’t they? Through an inevitable series of flashbacks, layers peel back to reveal a simple, good-natured guy whose desires were simplistic to a fault, and someone who was comfortable with the idea of just, you know, growing old with the woman he loved. Don’t pity the idea of such an easy-going lad being gone so early on in this story, however. Ironically, he is the lucky one.

The first dilemma with the story of “P.S. – I Love You” is obvious: the Swank character never emerges as a plausible candidate for the affections of someone so likeable. Why? Because she is infuriatingly fragile, caught up in blatant anxieties in one place and then overbearing in the next, even occasionally stumbling into situations that are borderline slapstick because she is too love-struck to actually use her brain. We suspect Gerry knew this and was caught in some sort of romantic power trip over it, otherwise he wouldn’t have felt so obligated to write hundreds of letters to her that would find their way into her hands one-by-one for a period of several months following his death. The gimmick here, of course, is that the letters become a coping mechanism to a woman now lost in a loveless world, but is that perspective really healthy? Holly’s mother Patricia (Kathy Bates) wonders this early on and warns her daughter to not depend on them, as they will delay the inevitable closure needed for her to move on from the experience. My personal opinion: if I were that sick with something so terminal, the last thing on my mind would be to write a novel’s worth of notes to my significant other and have them strategically revealed in stages over such a lengthy period of time following my death; this seems not only arrogant, but cruel.

The letters themselves are implausibly sentimental, and are basically a tool for the plot to jump back and forth from current situations to past memories in order for us to understand how everything plays out in Holly’s present state of mind. To up the ante, the plot also throws her two curve balls: in the most consistent, she is pursued by a friend named Daniel (Harry Connick, Jr.), who loves the grieving widow from afar but isn’t sure when the appropriate moment will come for him to make those feelings known; and in the second, she wanders into an Irish bar while on vacation, gains the attention of a gorgeous and smooth-talking Irishman and promptly goes to bed with him… only to discover, shortly after orgasm, that said man actually knew Gerry quite well. The scene then ends with an affectionate Holly leaning against him as he entertains her with old stories of their past friendship.

None of this is engaging in any capacity. Stories about men or women who are grieving in relation to their significant other can find success out of a thought process that is organic to their situation, but “P.S. – I Love You” does not conjure realistic situations out of the tragedy that envelopes Holly’s life. All of this, in fact, is really quite creepy, and I detest the implication on part of the writers to assume that any of their shallow characters would even be deserving of something so over-the-top in execution, much less worthy of basic psychological insight. The screenplay is based on a book I am unfamiliar with – one that saw equal success on the bestseller charts – but any thematic links that originate from the source material do not make for very feasible screen transitions. The result is a movie that is sickeningly sappy, manufactured by ridiculous coincidences, and inconsiderate of the idea that real human beings must be allowed to grieve on a platform of their own making, not one that is engineered by the exploits of an overzealous dead guy who insists on stringing his loved ones along with misguided life lessons on stationary. To be quite frank, this is really sick and unnerving stuff.

The movie was directed by Richard LeGravanese, who is relatively new to the fold of mainstream Hollywood, and no doubt aspires to make good movies. What he reveals in “P.S. – I Love You” is not unlike an unfortunate reality that plagues many newcomers to this industry – which is that the gloss and glory of movie prestige is capable of undermining one’s ability to make informed choices on their material. This is not an unfounded prospect, either; the great James Cameron started his directorial career with the ridiculous “Piranha 2,” for example, and the duo behind the immense success of “South Park” slogged their way through a series of terrible features early on in this medium, including “BASEketball” and “Orgazmo.” If LeGravanese does indeed possess any hint of skill beneath the schlock that encompasses this film, then it will no doubt reveal itself in future endeavors – perhaps making the existence of this unfortunate travesty all the more important to him as a hurried lesson in what to avoid when playing to an audience with an IQ greater than your average cheeseburger.

Author’s Note: This review is another in a series of incomplete works that has sat dormant in a computer folder over the past several years that is now being finished and published.

I agree with some of the above. However, the reason for much of the incongruity of the film is that it was taken away from its Irish roots, the plot, originally set in Ireland, moves to New York, thus necessitating an all-American cast that in no way portrays the characters in the original book.

Hilary Swank is dippy and un-loveable, Gerard Butler plays a stereotypical Oirish man with the worst accent this side of Dublin, and Daniel is a typical Harry Connick Jnr creation, that is, weird, psychotic and nowhere near likeable.

The film would have had some kudos if the writers had kept to the original storyline, although, on second thoughts, a story about how a middle aged man with an ego the size of Jupiter manages to control his bird from the other side is perhaps a little too creepy for even the most sympathetic and sensitive film biewers.

I am left feeling bereft, bereft of the original Irish charm of a fairly interesting novel, and disappointed, disappointed that I watched the film in the first place. Thank you.