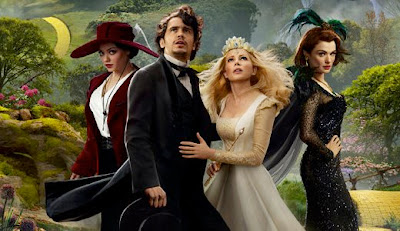 It’s hard to comprehend how this could have gone so wrong. The wondrous childhood realm of Oz, of witches and munchkins and flying monkeys and little people made of china, is a ripened fantasy world that has dangled luscious fruit in front of our eager faces for well over a century, and yet has endured a stigma of untouchable notoriety for well over half of that time. No doubt the immense success of MGM’s “The Wizard of Oz” in 1939 shut all sorts of future windows for ambitious filmmakers who desired a taste of the literary pie, but time would inevitable allow those windows to be shattered (the first attempt in 1985, “Return to Oz,” added an adult subtext but failed at exploiting the deep-seeded magic of the stories). Now comes “Oz the Great and Powerful,” a movie about the untold adventures of the mischievous and manipulative man who would become the great Wizard, and the prospect of revisiting the elusive magical country is astonishing. Coupled with the notion of a talented and successful director like Sam Raimi being at the helm, all the key ingredients for a highly anticipated prequel line up effortlessly, and the idea seems ironclad. And yet somehow we wind up with a great looking mess, a movie that encompasses technical brilliance and breathtaking images but never lets them off the autopilot setting.

The movie is directed with a certain misplaced arrogance, I believe. For well over two hours, dazzling sights and wondrous scope enchant us beyond reasoning, seemingly lifted from some corner of a mind well versed in the dynamic visions set on page by the great L. Frank Baum a century prior. Even as the movie plays through the first act, we are hooked by its apparent quirks; the black and white sequences appear in a narrower aspect ratio and then stretch to the width of the theater once Oz reveals its full splendor, and then characters begin to jump out as if cultivated from an undeniable sense of charm buried somewhere in the screenplay. Once the story gets fully underway, however, it doesn’t really know where to go, and the visuals simply escalate into a sphere that is unreachable. Is it feasible that Raimi simply did not read his screenplay deeply enough beforehand? A highly unlikely scenario for the same man who made the very successful “Spider Man” films, I say. Yet as painful as it would be to admit so, perhaps he simply felt the visuals were perfect enough to occupy the target audience without the benefit of an equally-potent narrative. This is the kind of movie that doesn’t so much rush off the screen as it prances off with its nose turned up in the air.

The story takes place a few years prior to the events of the original “Wizard” story, just a short period before the land of Oz even came into possession of a great and powerful sorcerer ruling over the fabled Emerald City. At the opening of the picture, said Wizard is little more than a carnival magician, seeking an impression of grandeur that is unwarranted in context of his blatant amateurism in masking the illusions of his tricks. Nonetheless, despite his audience’s ability to catch on to the smoke and mirrors, the magician (played here by James Franco) sees greatness on the horizon for him, and has an honest conversation with a woman named Annie Gale about how the road of fate has yet to determine his important path. The fates must have heard him, because in the next scene he is fleeing a confrontation in his hot air balloon, and gets sucked up by a tornado and whisked away to some distant land more colorful than Kansas…

His arrival in the mystical land of Oz is greeted by a dazzling array of colorful characters, not the least of which is a trio of witches who are going through an elaborate sense of sibling rivalry. The most important of these is Evanora (Rachel Weisz), who rules over the Emerald City and has long been looking for the important being who has been prophesized to lead Oz out of a dark time and into an age of prosperity. Alas, the magician’s ego is undercut by the notion of his potential rule being left up to the task of executing one of the three witches. But how can he possibly do that? The great and powerful “wizard,” as he is perceived to be, is really nothing more than a humbug after all. Is there any possible trick up his sleeve convincing enough to produce the results required of earning those keys to the fabulous Emerald City?

Contrary to the implication set by the existence of such an exhausting series of books (the original publisher released 40 individual stories in the Oz cannon, and more followed independently), the tale of what happened prior to Dorothy Gale’s first appearance in this fairyland is not one that has actually been told in any official capacity. Big opportunity, at least for eager writers. Alas, the screenplay by Mitchell Kapner and David Lindsay-Abaire stagnates in its own sense of wonder, and plods through one situation after another as if impatient with the idea of working for a genuine payoff. This is a shocking concept in the hands of the movie’s director, who has made a career out of consistently yielding endeavors that are capable of blending the synergy of writers and technical artists into a worthwhile adventure. Think of the ambition on display in “Spider Man 2,” arguably one of the finest adaptations of a comic book ever made; while the technical skill is unmatched, what makes the movie work is a rich and intricate plot laced with a philosophical subtest underneath constant waves of thoughtful (and sometimes tense) plot developments and sub-climaxes. Here is a man who knows what he is doing, but perhaps lacks the foresight to understand exactly what makes a story like this pop beyond the sheer visual skill that is on display. I wager to guess that his dealings with the Oz books were in passing.

Some highlights come in the form of subtle nods to the original source material. The magician’s object of affection, Annie, carries a surname that alludes to the oncoming existence of a very important character in the stories. The circus is operated by the “Baum Brothers,” an obvious wink to the story’s author, and the Franco character’s assistant is even named Frank. The minor characters, such as a spunky girl from the china country, are well drawn and exist as a cheeky nuance to material of the original novels previously left out of the prior film. There is also some skill in the way the movie dances around the visual elements of the famous MGM classic but doesn’t quite directly lift them, no doubt because important elements like the Ruby Slippers and the Wicked Witch’s famous mole are still under copyright. And despite the fact that there is little sense of adventure going on in the plot, the fact does remain that the scope of Raimi’s cinematographer and visual effects artists is quite breathtaking, and they paint the Oz we know and love in jagged edges with looming shadows as if to evoke the expressionistic style of the silent era. No doubt, the artists on board “Oz the Great and Powerful” did their homework and have yielded results more plausible than they perhaps have the right to be.

And yet the film just does not work. Its story is pedestrian, and plays safe with nearly every narrative device that it pitches. The central conflict is conventional, and unsatisfying. The witches are only drawn from a perspective of one-dimensional clichés, and the final act plays like an elaborate magic show that seems displaced from the intricate world in which it is supposed to occur in. Unfortunately, this is not the Oz of the great L. Frank Baum or his fellow Oz historians; it is a special effects extravaganza painted over the canvas of much more promising material. I suppose the core audience with be delighted merely by the elaborate presentation, and the movie does indeed look and feel great from the perspective of young minds. But some of us know better. I am an Oz aficionado. And if there is still a note of resonance contained in these stories for the future of the motion picture, “Oz the Great and Powerful” does not find it. What an unfortunate fate.