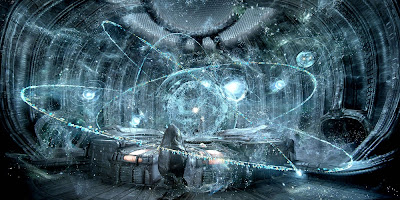 There is an air of ambiguity circling the story of Ridley Scott’s “Prometheus” that by most standards would lose the patience of hardcore science fiction viewers. Consistent with questions but scarce on answers, clouds of uncertainty whirl to and fro as if traps to intensify potential intrigue, forcing us to view most of the movie through eyes of suspicion even when things appear crystal clear. When characters engage in a trade of information about what they discover, is it truly all that they have discovered? Do the glances they exchange carry hidden purpose, or divulge some deeper meaning into the complexity of their situation? And just when you think a key player in the game has revealed his or her hand, is someone standing behind the shadows waiting to reveal something greater than aforementioned? Here lies a story that revels in the enigmatic almost as much as it thrives on a fostered sense of tension, and the outcome has the potential to be derailing to those whose minds are not willing to dedicate added concentration.

In the hands of the right director, it makes for one heck of a good time. Ridley Scott is not unfamiliar with this approach, nor is he the type of director who is easy to give away secrets of a narrative that demands masks be lifted only when necessary to the effect of a plot twist. This, among other reasons, is what makes him the perfect filmmaker to undertake “Prometheus,” a movie that has distinct stylistic links to his “Alien” picture, dances dangerous lines separating the plausible from the infuriating, and requires the scope to reach far above what science fiction films in the recent years have been used to. This is not only a rousing entertainment, but a deep, thought provoking and visionary one. It is the kind of movie you hope for (but seldom get) in an age when the genre is occupied by loud obnoxious special effects and intricate gadgets that refuse to glimpse far enough into anything to inspire the inner workings of imagination. It is easily the most cerebral endeavor of its kind since “Minority Report.”

The film starts Noomi Rapace and Logan Marshall-Green as married archaeologists who, in the year 2093, have come across an important find that may be a gateway to mankind’s most colossal discovery in their civilization’s history. Cave paintings from seemingly unrelated cultures have been uncovered in various parts of the Earth, and combined they reveal very staggering coincidences – most notably, a cluster of stars laid out precisely the same in each pictogram. The characters, Elizabeth Shaw and Charlie Holloway, have concluded that these stars may point to the potential origin of mankind, and that possibility warrants a trek across galaxies in search of the greatest unknown secret that could ever be answered.

Their find is substantial enough to pique the interest of a multi-million dollar corporation, which is represented by the ambiguous Meredith Vickers (Charlize Theron). At the corporation’s beckoning, they dispatch the large expensive space vessel Prometheus into outer space in search of the source of this potentially massive discovery. In addition to Vickers and the two archaeologists, the vessel also carries an assorted crew of wisecracking but inquisitive scientists and military men who will play important roles once the destination is reached: there’s Janek (Idris Elba), a no-nonsense pilot whose lack of scientific knowledge is compensated for in an intuitive demeanor; Fifield (Sean Harris), a rough sort who asks hard questions and but does not accept sugar-coated answers; and David (Michael Fassbender), a synthetic human, who absorbs research swiftly and sees a potential discovery of an alien vessel or culture as merely new opportunities to expand his growing memory bank of information.

The source eluded to by those pictograms appears to be a series of planetoids orbiting a sun in a distant galaxy. One in particular, dubbed “LV-223,” provides clues to something greater than just an undiscovered surface. An alien structure resembling a pyramid seems to beckon curiosity, and at closer inspection reveals a labyrinth of underground catacombs filled with potential scientific treasures. No one knows exactly what any of it means at first glance, but they approach with caution, and marvel at morsels without pushing too hard on new findings until the threat of danger appears minimal. Only David, ever so intrigued by new findings without the benefit of human-bound fears, proceeds more swiftly through the catacombs, and the movie gives him several important scenes in an expansive control room where holographic maps of star systems bounce off walls like rubber mallets.

This gradual, unfastened descent into the claustrophobic interiors of the alien spacecraft yields a production design that echoes the “Alien” pictures, but now seems to reach even far beyond the canvas edges. The designer, Arthur Max, has worked on a handful of Ridley Scott’s previous endeavors, including “Kingdom of Heaven” and “Gladiator,” but now shows us what he is fully capable of accomplishing with his given material. H.R. Giger inspired the vast empty caverns of Scott’s first sci-fi horror outing, and here they pulsate with an aura of imperial suppression; large facial profiles emerge from high walls with seamless fastidiousness, and murals that reveal secrets of potential narrative importance stand at attention above archways and ceiling peaks as if in some kind of extraterrestrial cathedral. What the movie looks like becomes its own story device in some manner, pushing characters in directions that will either benefit or undermine their safety in the ominous encounters to follow.

The movie is ripe with reveals. Cylindrical artifacts rooted at the base of a large face in the side of the interior ooze with what we suspect is an alien DNA. Holographic recordings document the last moments in the life of a being who is pursued through the catacombs by an unseen enemy. The severed head of a human-like organism is acquired and researched, revealing a face beneath a complicated space helmet that is shockingly familiar. And when the Elizabeth character becomes pregnant, there is doubt as to the validity of her husband being the true father. Why? Because the only possible time for fertilization was the night before, and science has taught us enough to know that it’s impossible to conceive so conclusively in such a short time frame. Unless, of course, Charlie was not entirely human once the fertilization began…

Some of these questions arrive at clear conclusions, others do not. In both respects, they are met with direction so ambitious and enthralling that it has us glued to our seats. Ridley Scott has an undeniable skill in this kind of realm; his science fiction is just as much horrifying as it is imaginative, and each detail affects the next like an ambitious game of predictive dominos. Moreover, his characters wander through this story without becoming screaming or mindless drudges, as is a common practice in movies about large-scale terror. By the third act, we aren’t so much asking ourselves what it all means as much as we are wondering how what characters remain can possibly escape unscathed… or, if at that point, there is any hope to reverse the dangerous chain of events that their curiosity has set in motion. The fact that we care enough to wonder those things speaks volumes to the film’s merit.

The screenplay is by Jon Spaihts and Damon Lindelof, both of whom take not only an important leaf out of the “Alien” films for their premise, but also “2001” and, to a lesser extent, “Event Horizon.” Like those movies, the story can be broken down to one basic principle: comprehending that which is wild and untamed can and will result in chaos, as is the nature of the universe. But that is only one of the movie’s aims; in other respects, it wants to reach beyond what a single movie can answer when it comes to raising important philosophical questions. Is that a case of biting off more than you can chew? Perhaps, but that only becomes a detriment to the movie if you allow it. What “Prometheus” ultimately does is re-open the doors of discussion that have become so routinely slammed shut by a genre now sterilized by the homogenous intentions of less capable minds. It is shrewd entertainment on a scale of grand proportions, smart and expansive, and for two hours I was not only never bored, but infinitely fascinated.

This is one of the most cogent, perceptive, worthwhile descriptions if the film I've ever encountered. Nice work. Thanks.