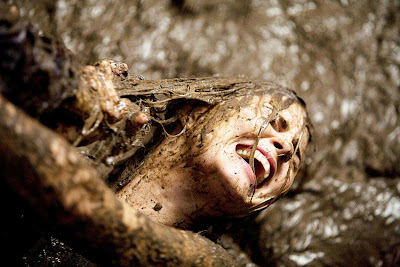 The title “Drag Me to Hell” offers both literal and ironic inklings to those associated with the movie’s payoff, including the audience. A young woman aspiring for big professional opportunities at a bank makes a grievous error with a mysterious woman who arrives at her desk pleading for help, resulting in a horrific curse that anchors the crosshairs of torment onto her soul for a resulting 100 minutes of loud and foreboding celluloid. Her house thumps with the thundering sounds of something monstrous, and then a shadowy form tosses her around like a torn rag doll. She is attacked in her office garage. Animals hiss and growl as she walks by. She is assailed by visions of a malevolent being who makes clear his purpose of pulling her into an afterlife of endless torture and suffering. And then the movie demands the panic-stricken victim to sacrifice a kitten in a vain attempt to ward off the evil presence… and in that moment, a deplorable line is crossed.

For the remaining running time, no more is it our concern as to whether she is going to emerge from the experience in tact or unscathed; the real hell eluded to by said title now becomes the movie theater, where moviegoers go from being surprised and thrilled to completely appalled by some contemptible plot decisions. After a certain point, the movie becomes our own cinematic damnation from which there is no escape.

The movie is the brain child of Sam Raimi, who was made famous in this genre early on with the “Evil Dead” series, and then departed the trenches of B-movie horror comedy in favor of loftier Hollywood ambitions. The results were eclectic but effective, yielding the marvelous “A Simple Plan,” a taut thriller called “The Gift,” and the box office triumph of the first three “Spider Man” movies. Somehow, after those achievements, Raimi’s mind convinced itself that revisiting the past was a wise decision, perhaps strengthened by the noting that more money for a film budget was as his disposal, and the support of a major studio would give him certain freedoms with this approach that were not allotted to him so many years prior. Sometimes, they say, the past is better left there.

The movie stars Alison Lohman as Christine Brown, the would-be heroin of the story, who is basically a collection of insecurities masquerading around under the veneer of opportunistic intentions. She is a financial consultant at a bank, vying for an assistant manager position and doing nearly anything possible to try and impress her indecisive boss, who is also considering a potentially more qualified candidate for the job. Those lofty ambitions are realized when an old and grotesque woman (Lorna Raver) comes to her desk, begging for a third extension on her house’s mortgage. Christine feigns sympathy, but denies the claim and leaves her at the mercy of a foreclosure. The old woman begins causing a public scene by getting on her knees, to which Christine calls security for her removal. Big mistake. The old lady is actually a gypsy, and doesn’t respond very well to being shamed; in fact, she becomes downright horrific in the coming minutes, attacking Christine in her car in a dimly-lit garage, and then cursing her to eternal damnation in three days.

What this does is set a chain of events in motion that, for the first hour of the film, are highly entertaining. Raimi’s penchant for immediate shocks is on full display, sometimes startling and at other points almost comical in execution. The sequence in the garage is notably effective; for five continuous minutes, the car-bound physical attack between the angered gypsy and Christine balances implausible (but intentional) laughs with heightened tension, and all of it is executed to, well, alarming gross-out proportions. There is no denying that the director knows exactly what he is doing with the camera, and you are left with the impressing that it submits to his skill as if submissive to some level of fetishistic dominance.

Other sequences follow, many equal in value. Christine and her rather innocuous boyfriend, Clay (Justin Long) visit a fortune teller in hopes of figuring out if she, indeed, is cursed by something, and meet Rham Jas (Dileep Rao), who offers more insight into the inner makings of her supernatural predicament than she probably deserves. In repeated intervals, the story requires her to revisit him for spiritual consult, and he in turn provides potential solutions in managing the curse before it ultimately consumes her. The most heinous of these details is in animal sacrifice, which she is uncertain about until another sequence requires more violent tossing around by an unseen presence in her bedroom. Cut to the next scene, in which she stalks her kitten into the laundry room while holding a butcher knife, and then in the next scene is shown burying its bloody corpse in the backyard.

This is not a necessary action for any film of this nature, not by any stretch. It reminded me of “The Last Exorcism,” a recent hand-held horror movie, which contains a moment in which a live feline is bludgeoned to death by the very camera viewing the action first-hand. Like this endeavor, that film too derailed any of its momentum simply by resorting to a painful and unusual display of sickening animal torture. Is this really the new trend in today’s horror genre? If so, it highlights a road much darker and cruel than warranted. Horror leaves nothing untouched and punished, perhaps, but a truly effective picture is made so by the notion that anyone victimized by evil can, and will, be given the chance to fight back. By making a victim out of something so harmless, “Drag Me to Hell” becomes so deranged that it loses its right to entertain us beyond that first hour, and everything that follows becomes viewed with a persistently unsatisfying aftertaste. The ending of the movie is also muddled, with the last twenty minutes or so feeling curiously overwritten. The result is a triple climax conveyed without rhyme or reason, and remaining conflicts become so dissonant with the rhythm established in the first hour that all patience is tossed out the window.

The intention here is probably very innocent, almost hysterical. Sadly, what “Drags Me to Hell” ultimately represents is the continued nagging emotion that horror, even with comedic underpinnings, is becoming too nihilistic for its own good. The disbelief can no longer be suspended, and the levels to which any filmmaker, including Raimi, will sink to in order to shock are moving past certain boundaries dangerously fast. Indeed, to reflect on your past glories as a filmmaker can be powerful for a man who has come as far as this. But he has grown up into something much more, and one can’t help but feel the proper way to echo the glories of the past would be to live in the present, not revisit a sensibility that can no longer be spoken with the same level of untrained humor as before.