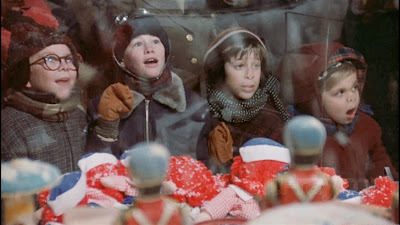 Significant contrasts exist between most movies about the holidays and Bob Clark’s “A Christmas Story,” but the key to its endurance over the years probably comes down to a certain cheerful self-awareness. Here is a movie where characters are not so much born from a script as they are molded within a tangible frame of reference, and through their sense of innocence, patience, imagination and ability to pass through situations with scarcely a shred of confidence, an image of the most bolstering movie family emerges. This, we quickly realize, creates a commodity of alarming clarity: for anyone who has ever experienced the childhood wonder associated with the festive traditions of Christmas (or the agonies of familial impatience), many of the scenes scattered throughout the picture seem to exist as projections, as if the movie camera is reaching into the scrapbook of the mind and drawing on specific memories for reference. Directors by nature look to their own lives for such inspiration, but this is an approach that is impeccably informed and organic, and Clark not only comprehends the emotions associated with suburban households in the hustle and bustle of the holidays, but somehow finds a universal elation in them.

Little doubt persists in that distinction. Released in 1983, the film carries on in that elusive cluster of A-list holiday favorites that are passed down year after year as part of a collective tradition on television airwaves, keeping company with the likes of “It’s a Wonderful Life” and “Miracle on 34th Street” (cable networks have even been known to indulge in nonstop 24-hour rotations of it). The perennial interest in good-spirited Christmas yarns is easily undermined by the onslaught of newer and lesser films that get added to the supply over the years, but the face of a little boy named Ralphie endures even with new audiences like one of those tree ornaments passed down between family members over generations: weathered and aged, but seeped in such nostalgia that it never ceases to shimmer. For younger viewers, the avid daydreams of a boy who simply wants a good Christmas present are warm and familiar, while those of us who have grown as the narrator has look at it with a certain delight, still captivated by the enchanting quality it holds over us.

The movie would be little more than a collection of amusing moments, however, if little Ralphie were not the glue holding them together. Plucky and naïve, he treads through the lighthearted sitcom that is his life with few goals but big desires. Primary among them: one of those Red Ryder carbine action two-hundred shot range model air rifles, often advertised in 1950s circular ads as the choice weapon of television western heroes. A routine series of daydreams at school and at the dinner table emphasize the enthusiasm in his yearning: they are kitschy and colorful, and usually end with the young hero staring blankly off in a state of youthful ecstasy. The conflict: none of the adults in the movie seem sympathetic to his one wish for Santa Clause, and the movie’s running joke is that all of the adults in his life continuously offer the same verbal dismissal of “you’ll shoot your eye out!”

Meanwhile, we get a series of comic snapshots into the inner-workings of Ralphie’s middle-class family. The mother (Melinda Dillon) is frumpy and conventional, and moves through domesticated house life like a machine on timed tasks. The father (Darren McGavin) is slightly aloof from most situations, and bursts into verbal cussing fits over the dying furnace in the basement. Ralphie’s younger brother Randy (Ian Petrella) says words only out of a necessity, and groans with displeasure at the dinner table when the parents ask him to eat his potatoes (another running joke: Mother Parker refuses to let him go out in the cold weather without burying him under countless layers of sweaters and scarves). The common bond in these characterizations isn’t so much that they are all caught up in the holiday way of things, but that they treat the time as simply another passage of events in their ongoing endeavors to live and love one another as families ought to – a key observation, I think, that gives the movie its timeless appeal.

Also critical to the film’s impact is the narration, which comes from a place of affection rather than detached observation. The voice-over is by Jean Shepherd, who wrote the original novel that the movie is based on, and as a grown Ralphie he never is at odds with a life that is now long past, but seemingly in awe of the innocence underlying it. Notice in some scenes how the comic effect is enhanced by the gusto of the narrated delivery, such as a scene in which Ralphie is punished for saying a cuss word by having soap shoved in his mouth (“My personal preference was for Lux, but I found Palmolive had a nice, piquant after-dinner flavor – heady, but with just a touch of mellow smoothness”). In other scenes, the words carry the punch of absolute truth, especially when it comes to knowing exactly what it’s like to be a young boy on the school playground (“We knew darn well it was always better not to get caught”). And when Ralphie is victimized by two bullies and there is a violent concluding outburst, the adult depicts the moment in a manner that suggests years of therapy, and the words trickle out like one last cathartic reflection timed for the camera.

All of these moments and observations and exchanges converge in the form of a journey that is charming, whimsical and brilliant, and encompassing those qualities is a simple kid whose eyes burn with unforgettable enthusiasm over the mention of little holiday pleasures. But why would any of this make “A Christmas Story” live a prolonged existence in an era when new generations of kids are spoiled on more extravagant material? I suspect it’s because amidst an array of precious morsels dispersed across 94 minutes of lively screen time, the movie has something poignant to say to all forms of an audience – to adults who reflect on holiday gift exchanges with fondness, to parents who remember the glee in the eyes of their kids when they open their gifts, to young kids who still carry certain wonderment about Santa Clause, and perhaps even to those in between who have grown under the shadows of a dangerous world and yet find undeniable allure in the prospect of everything in life being as simple and positive as little Ralphie chooses to see it. This isn’t a movie that endures because it’s just about the holidays, but because it takes pause to recognize the collective good nature we owe to one another all year round, and pays that knowledge forward with charm and wistfulness.