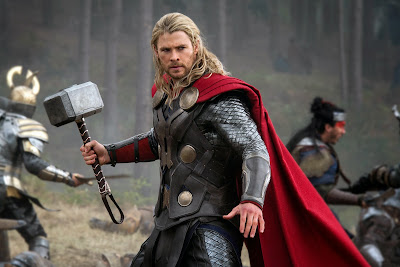 Movies continue to provide colossal snapshots into worlds that stretch beyond the frame of imagination, and the realm of Asgard in the “Thor” movies is certainly one of the most inspired of recent times. Amidst vast open spaces that seem stirred by Greek mythology rise pillars and towers that jut from a planetary surface like protests to nature, and characters seem to wander through their polished spaces as if insects inside a boundless hive of overreaching hallways and arenas. No wonder, perhaps, that its citizens are immortal beings; for this kind of utopian empire to exist, those that created it must obviously command a power far greater than what man can wield, much less understand. Observing “Thor: The Dark World” in which gods and demons adopt the primary roles of heroes and villains, I was struck not just by how fully realized the realm is, but also by the underlying notion that we as moviegoers have now seemingly exhausted what is palpable in our heads as creative environments to wander through in the movies. It is a fascinating paradox to find yourself in when the imaginative cityscapes of “Blade Runner” and “Dark City” now seem like half-forgotten relics in the celluloid scrapbook. Now what remains beyond the high pearly gates of the world of gods?

The movie is the sequel to “Thor,” a film which in itself was adapted from one of the more high-profile Marvel comic book series of the company’s golden age. By comparative standards, that film was misguided because it played like a mere dress rehearsal rather than an actual picture: little of it was staged for isolated affect, and every twist and turn seemed to originate from a place of setup rather than immediate payoff, suggesting the studio was simply motivated to prepare for the gargantuan “Avengers” film to follow. Having that out of the way, “Thor: The Dark World” works on its own set of merits; it is ambitious, focused, amusing and colorful, and though many of its events don’t quite match the realization of the high-reaching visuals, audiences will no doubt find themselves amused to no end for two hours of energetic action sequences that are as distinctive as they are well made.

The story has some equally intriguing ideas. Set in the present day following the events of both the first “Thor” film and “The Avengers,” the citizens of Asgard face a threat from an ancient civilization of dark elves, which has come out of exile as knowledge of the whereabouts of an ancient weapon known as the “Aether” is discovered. This weapon – an ancient fluid-like substance that apparently carries very dark energy – is a dangerous finding in the hands of any who seek to destroy worlds, and on the eve of an event referred to as the “Convergence” (in which all nine realms will align and portals will open between all of them), it may potentially herald the coming of a complete universal catastrophe, especially in the hands of pale demonic monsters hell-bent on overthrowing the empire of their sworn enemies.

The Aether is discovered, in no narrative coincidence, by Jane Foster (Natalie Portman), the astrophysicist that served as Thor’s earthly love interest in the first movie. Early on she is summoned to an abandoned factory where things seem to start disappearing into invisible gateways, and when she herself accidentally winds up passing through one such portal, she inadvertently discovers the prison of this dark substance and unleashes it into her own system. Armed with this foreboding knowledge, Thor (Chris Hemsworth) returns to Earth and whisks Jane back into his realm so her possessor can be studied – a decision, alas, that also sets off a chain reaction of ambitious battle sequences in which Asgard is invaded, nearly destroyed by the elves, and the hero is forced to turn to his brother (and greatest betrayer) Loki (Tom Hiddleston) for assistance in subverting the endeavors of those who seek to overwhelm the nine realms in the Aether’s shadowy chaos.

The movie would never work if the writers were not skilled at setting up far-fetched coincidences. A weapon as dangerous as this substance would be an intriguing device in any film, but in “Thor: The Dark World” it becomes the catalyst for a really rather dark series of plot points that all point towards the same certain fate: massive catastrophe, or major death in attempts to subvert it. We don’t expect much in the way of alarm in the faces of the Asgardians – one suspects this kind of premise is just all in a day’s work for them – but the human characters seem absent from all gloomy realizations when there should be more urgency. This includes Jane; Portman is normally in sync with most of her material, but here there is little sense that she possesses a great dark power within, and her personal acknowledgments are usually attached with the kind of repetitive scrawl that suggests she is merely imagining her protector with his shirt off.

On the flip side, the heroes and villains are well staged. Hemsworth makes a convincing Thor: not entirely wise or strategic, but he establishes the persona as one who reacts entirely out of instinct, and there are moments where he is able to stop and react with dramatic impact. Anthony Hopkins as Odin is the right fit for the role: maddeningly precise as the lord of the great realm of Asgard, he doesn’t so much speak words as he commands with overpowering statements of truth and honor. Christopher Eccleston, who was so effective as a villain in “28 Days Later” and “Elizabeth,” disappears flawlessly behind layers of makeup to play the villain Malekith, and his antics are subtle without resorting to obvious giveaways through the traditional dialogue of an action movie antagonist. And Tom Hiddleston’s Loki, effective in both the first “Thor” and “The Avengers,” still engages with his audience despite not having nearly as much to do this time around: defeated and solemn after imprisonment from earlier crimes, he is asked to assist in the defeat of the dark elves as a way of avenging a tragic death in the family. But are his actions entirely in good spirit, or does the lord of trickery still possess the chutzpah to build elaborate illusions around his newest agenda? That continues to be part of the fun of the performance.

The movie is wall to wall with brilliant special effects. The centerpiece of the film is a sequence in which Asgard is invaded after knowledge of the Aether within their realm is spread, and there is an elaborate battle involving alien ships that is both effectively photographed and executed. The production design by Charles Wood looks at replicating ideas from the original comics with more artistry than the material might deserve, but it is no less admirable: vast cityscapes are awe-inspiring, and even brief glimpses into other realms at the movie’s climax create a sense of wonder that goes beyond the expectation. Yet in some selfish way, I wished for an equally-stirring plot to match these images, unburdened by the necessity of the story to involve its characters in traditional “end of the world” scenarios that conclude with transparent setups for future installments. As a movie set in a universe from the pages of comic book material, “Thor: The Dark World” doesn’t think nearly as in-depth as we would like it to about such matters. But that’s ok, because it certainly has enough fun on the excursion to be thoroughly enjoyable for two constant hours. Nowadays, I guess, you can’t really ask for more than that.


Action/Fantasy (US); 2013; Rated PG-13 for sequences of intense sci-fi action and violence, and some suggestive content; Running Time: 112 Minutes