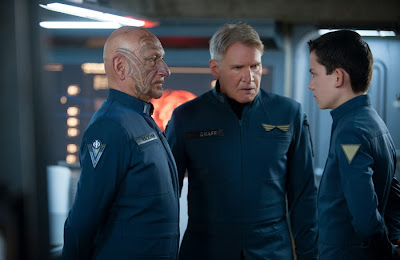 In the colorful but convoluted landscape of movie adventures in which youthful heroes face ominous predicaments, “Ender’s Game” scampers off the screen with something quite distinctive: an approach that demands well-drawn characters to carry the narrative as opposed to audacious visuals or action scenes. All indications of the premise certainly point towards something of formula; in a futuristic era where insect-like aliens invade Earth, are pushed back with military force and then hunted in an elaborate government plan designed to prevent all future retaliation, viewers are ingrained with the prospect of overzealous explosions dominating two hours of screen time. What a remarkable prospect to find the ideas rooted entirely in the faces of ordinary kids, many of whom carry the burden of fate on their shoulders but learn quickly and intuitively that their actions require the strategy of the mind as opposed to the impulse of the heart, otherwise uncertain outcomes risk the future of their very civilization.

Here is a movie that finds focus in the ideals of the classic science fiction yarns of that memorable age of literary imagination, realized through a technical and narrative approach that traps its details in a vacuum devoid of the overbearing modern blockbuster influence. It is no exaggeration that I wandered through two hours of this material grinning like an inquisitive schoolboy, marveled by the depth of the writing and the observant nature of the characterizations. The material originates from the famous 80s sci-fi fantasy series penned by Orson Scott Card, which provides its own revelation: how did an avid reader of the great works of Asimov, Clarke, Bradbury and Eddings allow material this intellectually potent to pass his notice until long after it left behind its mark? There is something to be said of a movie adaptation that comes along thirty years after the fact that possesses the cerebral scope of “Blade Runner” as opposed to the unrestrained visual impudence of “Transformers.”

Standing at the heart of an ensemble of intelligent kids is Ender Wiggin (Asa Butterfield), the most inspired protagonist this side of Harry Potter. Under a surface of understated impulse is a skillset that attracts the attention of ambitious military authorities, including Colonel Graff (Harrison Ford), who is seeking an authority figure in an impending intergalactic war with villainous aliens known as the Formics. Graff puts young Ender through a series of situational battery tests designed to profile him in a program often thought of as too rigorous to pass – even for those who volunteer for it – and the contemplative lad impresses his observers in countless ways. A situation involving peers inspiring confrontation over a virtual mind game is effortlessly resolved under the influence of calmness and caution. Later, when a group of bullies gang up on him as a way of creating a hotbed of emotional challenges, he defuses the situation violently but with strategy: to keep your enemy from attacking again, he indicates, you have to keep on him until he poses no further threat. The sense is established behind the scenes between Graff and his consort Major Anderson (Viola Davis) that the coming conflict requires not only the smartest of leaders, but also one who can learn from inevitable mistakes and react quickly to them. But how can one teen child possess the functional requirements of such a daunting role, even as he is being tested like a lab rat set off in a maze of life-threatening scenarios?

The nature of the young adult genre to imprison kids in the arena of adult-themed uncertainty is not a new concept, but one that has set an alarming new trend in recent releases across both mediums. I recall not just “The Hunger Games” in this example but also the recent “Mortal Instruments” series, about teenagers who get whisked up in an endless battle against demons and face several brushes with mortality. Are modern readers really excited about the prospect of narratives that ask their heroes to dance with the influence of death, destruction and outright mayhem as opposed to something a little less ominous or life-threatening? If that’s just the way of art’s evolution, I am willing to accept it even under some reservations. What puts “Ender’s Game” in a class of its own that way comes down to the powerful sense of empathy it has for its young characters, many of whom don’t even have the sense to see just how much is being forced on them in an hour of desperation. Theirs is a conflict that rests at the pinnacle of dire plot situations, yet the story never forgets exactly who its key players are or what it is asking them to sacrifice. In a way, it cares just as deeply about them as it expects us to.

Surrounding them are some of the cleanest special effects of recent memory. Most of the movie takes place entirely on a space station orbiting earth, which movies with almost organic fluidity and contains corridors that slant in on characters as if they are bugs meant to be squashed. A desolate alien planet landscape seen later in the film entirely in the background is effectively ominous, with its sharp-angled terrain and slanted pillars that look like shadowy invitations to danger. Archival footage of the previous battle, which is shown to the teen recruits as a way of inspiring them, is complex without being muddled or confusing when it comes to the cinematography. And the centerpiece of the film is a large round chamber known as the “battle room,” where teams compete with one another in a game meant to inspire tactic and focus in those meant to face the alien invasion; the weightless interiors are vast and expansive, and seem inspired by the rotating station hallway of Kubrick’s “2001: A Space Odyssey.”

The ending may baffle even those who learn to leave behind expectation. In a clever ruse that results in one final test in which Ender and his fellow graduates are required to execute a successful virtual ambush against the Formics before the actual attack, the narrative pulls a few rugs from underneath unsuspecting viewers that are not easily anticipated. Some have suggested that these are just a lame ploy for the movie to back out of providing a climax that matches the build-up of the prior two hours, but that goes to the thesis of the rest of the movie, in a way: restraint is a better conduit to successful resolutions, especially in stories where characters find the virtue in acting with their minds over their fists. Ender has learned a great many lessons that he could never have anticipated once the movie draws to a close, but perhaps none as powerful as the reminder in all of us that, yes, we still are capable of experiencing excitement and wonder through ideas rather than elaborate technical brandishes.