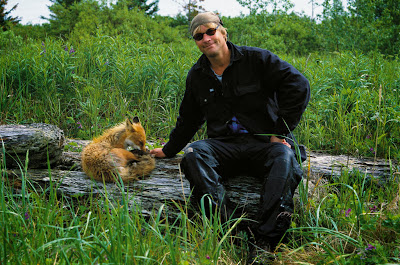 The greatest mystery of man often lies in the choices he makes, and Timothy Treadwell created perhaps some of the most ambitious riddles one could imagine. For thirteen consecutive summers, the shy and offbeat nomad left the human world behind and went to live in the company of the wildest of animals: large and dangerous grizzly bears in the Alaskan peninsula, many of which had spent their existence so far outside of human contact that he seemed to occupy space in their unrestrained existence as a lone alien. Social awkwardness made him an outcast, while the seeming peace and tranquility of the wilderness inspired buried passions. But what was the purpose of his consistent desire to distance himself from human interaction? What did he see in the grizzlies that gave him purpose? What do hours upon hours of video documentation show us, other than the dogged dreams of one who fell victim to a false idealism about ferocious predators that exist only to feed and survive?

It is certainly no small irony that these enigmas attracted the attention of director Werner Herzog. Perhaps German’s greatest and most consistent modern film auteur, there exists a certain kinship between he and Treadwell that is almost divine: one directs films in which men and their impossible tasks are absorbed unsympathetically into the natural order of things, and the other wrote himself unconsciously into a similar life of chaos and tragedy.  Little in the way of valid explanation or reasoning has been identified in the ten years since Treadwell’s tragic death, but Herzog’s stirring, thought-provoking documentary meditates on those thoughts with exceeding insight into the mind that drove the man. Did Treadwell identify with the grizzlies as a precursor in creating awareness in a creature he believed to be misunderstood, or were his antics to no benefit other than his own neurotic need to be displaced from society? At the center of this elaborate deconstruction is the discovery of a series of stirring images that the deceased captured entirely by accident on his travels, forever cementing the endeavor as one of not just clouded judgment, but also indescribable wonder.

The movie opens with some of Treadwell’s own footage – talking to the camera in a grassy field with a bear looming in the backdrop, he sells himself to an unknown audience as their eternal protector and watcher. “I will die for these animals,” he repeats to the camera. He speaks to them with cutesy vocal tones. The bears have all been given colorful nicknames like Mr. Chocolate. He acknowledges them less as animals and more like his children. Other wild animals wander along with alarming comfort in Timothy’s presence, solidifying the notion that this isn’t just a temporary excursion through the northern wilds, but rather a way of life for the enigmatic loner. The movie then cuts to more archive footage, this time of a late night appearance Treadwell makes on the David Letterman show, in which the host asks half-jokingly (but with alarming foreshadowing): “We're not going to open a newspaper one day and read about you being eaten by a bear, are we?”

A series of interviews intercut with more footage from Timothy’s Alaskan experiences reveal the important details of the various stages of his complicated life: first with his brutal death at the fangs of a bloodthirsty bear, and then inevitably to the first-handed accounts of friends and relatives who attempt to reason with his loss. One such person is a close friend and lover named Jewel Paloyak, who possesses not only some distinctive memories of Timothy, but also a series of personal items released by the coroner just as this documentary is being made, including a video tape from Treadwell’s camera that apparently contains audio portions of the bear attack that killed him. Herzog listens intently to this audio from headphones as the camera shoots him from behind; because there is never a sense in that key moment as to whether the movie will allow us to hear the audio for ourselves, we watch on with paralyzed dread until the scene is over, and then breathe a sigh of relief that the director’s momentary suffering does not have to be our own.

The key ingredient in “Grizzly Man” is the immense amount of archival footage in the director’s possession, and he puts enough of it on display to create a fascinating portrait of a man lost in the wilderness of his own mind. Many of the shots are arresting, like one taken days before his death in which he banters with the territorial bear that will ultimately devour him; in another, he spies two bears wandering in the foreground when a group of docile foxes wanders into the frame. For Treadwell, the camera ultimately seems to take on two purposes: one as a video diary, and the other as a defense against a series of grim circumstances that threaten the lives of the animals he has sworn to protect. Late in the 2002 Alaskan summer, for instance, hunters descend into the region and begin to target the grizzlies; Timothy responds to their invasive actions by shouting profanities at them while hiding behind bushes, and the camera captures shots of them as if to create a sense of threat in revealing their heinous acts against wild animals to the world. Earlier still, he uses the camera lens as a way or bargaining with higher powers for more rainfall, otherwise the rivers will dry and starve the bears.

The widely-reported death of the “grizzly man” in October of 2003 has become the reactionary sound bite to all those who hear Tim’s name in casual conversation – oh yeah, he was the man who was eaten by bears!, they say – but Herzog senses more to the guy’s inner workings, and uses this film almost as a pseudo-therapy in dealing with any potential findings. Documentaries often place the barrier of neutrality in between the filmmakers and the events for the sake of audiences who require education, but Werner revels in commenting on the events with personalized insights. Does he identify with Treadwell? Not directly I suspect, but there is a sense that he understands the inner-chaos of men better than most after working with some of the most notorious tyrants of his day (including the great Klaus Kinski, who starred in five of his own movies, and was the subject of another of the director’s documentaries called “My Best Fiend,” in which Herzog admits to pulling a loaded gun on the actor in order to keep him from unraveling critical shoots on location). Treadwell was not measured by spite or malice, but his simple-mindedness made him fully blind to the very real dangers he faced, and interviews with those who knew him best, unfortunately, cement some of our own knee-jerk assumptions that he was acting only out of rebellion to the civilized world rather than to any naturalist purpose. Diane Fossey and Ralph Waldo Emerson wandered into the wilderness for the sake of study and preservation; here was a man who sought outcasts to identify with, and found them in ferocious beasts he thought of as pets.

By the end, Herzog’s lack of a major epiphany in this mystery ultimately becomes the thesis: some reasons defy the urge to be reasoned with, and the absence of an explanation in Treadwell’s defense perhaps says more about the instability of his character than the content of it. The director arrives at this point with sullen but resolved distinction, but makes a powerful closing observation as his subject walks unabashedly away from the camera: “What remains is his footage. And while we watch the animals in their joys of being, in their grace and ferociousness, a thought becomes more and more clear. That it is not so much a look at wild nature, as it is an insight into ourselves, our nature. And that, for me, beyond his mission, gives meaning to his life and to his death.” In some paradoxical way, Herzog arrives at a center that parallels most of his own stories, and finds peace in that discovery.

Author's Note: "Grizzly Man" is not being given a star rating, as part of a new standard that makes documentarites exempt from the grading system.