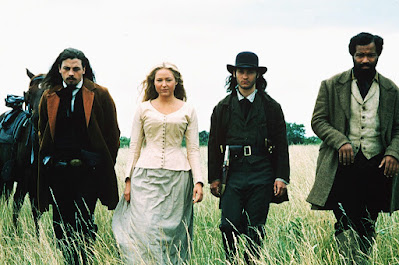 Starring in some intriguing but held back roles are Tobey Maguire ("Pleasantville"), Skeet Ulrich ("Scream"), Simon Baker-Denny and Jeffrey Wright. Each plays a straight-laced member of a Missouri group known as the Bushwhackers, who abandon their communities because their personal values do not reflect those of the local people. In the midst of all their rebellious ways (at least in the eyes of the government) is the Civil War itself, which serves as merely a backdrop to the story of the guerillas. Missouri was, of course, the only state of slave-holders that joined in with the Union, but that fact only interferes with the scripts motivated story; we want to know these characters, yes, but set against the backdrop of the Civil War (which is, in itself, a subject that can expand decently in two dozen movies) makes us believe that we are in for all sorts of visual battle scenes and cinematic history interpretations. But that idea is abandoned for a story about brotherhood, in which the four men in question fight personal battles, local wars against Jayhawkers, and their own spurred beliefs. There is even an African American here who is fighting for the south, although it becomes unclear as to why he is doing such a thing. Only a few of the personal notions shine through; it is to understand, for instance, that the guerillas would want to seek revenge for witnessing the burning of a farm and death of a farmer (especially when he's the father of one of the Bushwhackers).

What happens to all the historical battles then, you ask? Oh, they're in the movie alright; it's just that most, like one that takes place on Kansas turf, are drastically short, and overly packed with soldiers. One who is expecting those glorious war scenes as demonstrated in Civil War movies like "Glory" can turn the other way; these are more like battles from old movie reels that have been edited for time.

If the movie has any solid recommendation, it would simply be for the tour-de-force performance from pop superstar Jewel. Although her music is anything but memorable, her screen presence is overwhelmingly exquisite; she adds a sense of deep romanticism to the story, bringing food to the guerillas hiding out in a cave, and bonding with one until the relationship turns serious via a sudden pregnancy.

The film is also shot by "The Ice Storm"s cinematographer Frederick Elmes, who has proven with every effort that he has a natural talent for evoking beautiful wintry images in movies. The frigid look of the film is incredible, especially when the colder temperatures start kicking in.

"Ride With The Devil" is not a completely bad film. To its credit, it manages to provoke some fascination when the characters, be they colorless, are so divided that they are even forced to side against their local governments. Unfortunately, the movie never goes into depth; characters and relationships are intriguing, but nothing decent can be said about their interiors.

Produced by Anne Carey, Robert F. Colesberry, Ted Hope, David Linde and James Schamus; Directed by Ang Lee; Screenwritten by James Schamus; based on the novel "Woe To Live On" by Daniel Woodrell