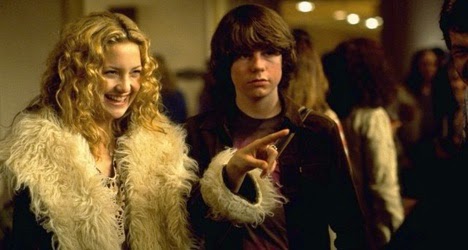 Don’t assume, however, that you will be seeing a picture about a journalist, which is what the promotional campaign seems to indicate; this is a coming-of-age tale set to the age of rock and roll, family relationships, and a 1970s retrospective. The center of the picture is a teenager named William Miller (reportedly a mirror to Crowe’s semi-autobiographical plot). He is played by Patrick Fugit, a relatively unknown young actor who ought to be on his way to a busy career. William lives with his defensive but loving mother Elaine (Francis McDormand), and occupies his time listening to his sister’s record collection (in the opening scenes, she runs away from home to become a stewardess). Those tastes eventually evolve William’s underlying forte for writing, and a music reporter working with a small music publication named Lester (Philip Seymour Hoffman) takes the youngster under his wing to mold that talent.

Soon after Rolling Stone calls to offer him a job, ambivalent to the knowledge that he is only 15 years of age. They ask for a feature on an up-and-coming band named Stillwater, headed by an easily-angered vocalist named Jeff Bebe (Jason Lee), and a quirky (but down-to-earth) guitar player named Russell Hammond (Billy Crudup). Of course all of this comes with an important piece of advice that should be the norm in any curriculum: never make friends with your sources. Unfortunately, 15 is an age of naivety, so it’s a given that William does exactly the opposite of what is encouraged.

The key to the film’s success is in the rich relationships between characters. Russell, a guitarist whose popularity overshadows his band mates, is one of the movie’s spinal columns, and both he and William bond over their fragmented relationships at home. Penny Lane (Kate Hudson), one of Stillwater’s female groupies (although the movie proudly labels them “band-aids”), also has a significant relationship here with William: as a guide to Stillwater’s backstage antics, she has such charm and conviction that it’s no wonder Will is whisked off his feet by her.

But the heart of the story (and perhaps rightfully) lies in the more low-profile relationship: that of mother and son. Elaine is a woman who feels like a failure as a parent (her runaway daughter is a prime motivator), and that regret reflects on William, whom she guides with an almost suffocating involvement. And what’s most efficient is how Crowe never tries to overplay his characters in this situation: William isn’t a spoiled brat who takes advantage of the situations, and Elaine isn’t the narrow-minded, “rock music is devil’s work”-kind of mother she might have been. In fact, when William informs Elaine of his plans to leave school and pursue this article writing thing, she’s upset and worried, yes, but supports the decision.

Crowe is one of the more fascinating filmmakers of our time, because his material seems to get more and more inspired by the events that helped catapult him into Hollywood (few will argue that even “Jerry Maguire,” his last endeavor, occupied a similar). Perhaps the experience of living his stories is what makes him such a passionate owner of this material, because “Almost Famous” finds solid performances, incisive dialogue, edgy humor and firm chemistry all under a narrative that has something relevant to say to everyone who sees it. This year’s many disappointments now seem almost excusable: an intellectual and charming triumph, “Almost Famous” would have been worth ten times the wait.