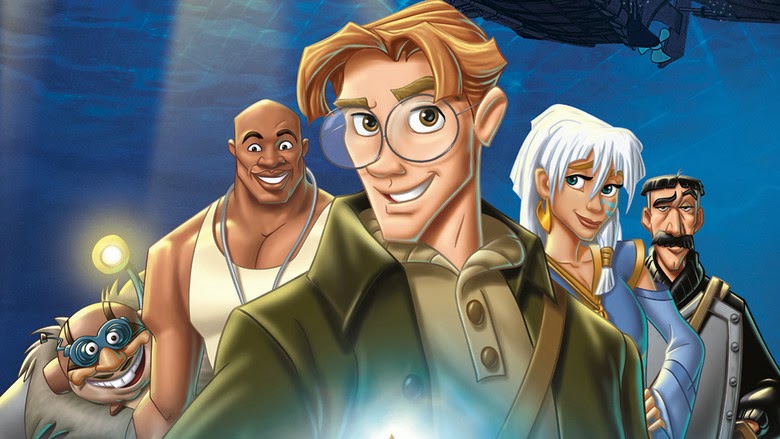 But instead of simply teasing us with growth, Disney pulls a full throttle, diving into the concept so vigorously that the movie even has the courage to borrow resources from Japanese Anime: hard edges outlining the characters, and angles of view that turn ordinary action into free-flowing excitement. There is even a point in the picture when it seems like the screenplay has lapsed into Hollywood epic territory—you know, the moment in which the plot introduces all of its important players just minutes before a disaster halts the excitement of the situation. These notations might seem like quibbles (who wants too much familiarity from anything?), but for Disney, a studio that has spent the last ten years redoing the same old song and dance in feature cartoons, it should at bare minimum be praised from distracting them from more obvious cliches. What matters most, in any case, is that the story is fascinating, the characters are offbeat and the animation is courageous.

Don’t look at this as a new beginning, however. No, not because it is expected of the studio to revert back to its musical comedy formula, but because (in case you didn’t notice) there was a little animated feature Disney released last December called “The Emperor’s New Groove.” That film could be credited for being Disney’s first venture into new territory, although many saw it as more of an amusing distraction rather than a classic Disney comedy, making its existence much less known to the general public.

What makes “Atlantis: The Lost Empire” perhaps more known and appealing to the public is its broad subject matter. The movie deals with the legend of the lost city of Atlantis—an advanced civilization that “disappeared into the depths of the sea” hundreds of years ago—and the efforts of one brave individual to uncover its mysterious past and, hopefully, its current whereabouts. The main characters is Milo James Thatch (Michael J. Fox), a boiler technitian at an elite museum of history and art whose penchant for details stimulates his hope in finding evidence of the existence of Atlantis. Cracking the written language of the ancient civilization, Milo believes that a lost book containing all of the secrets of this world is buried somewhere in Iceland—that is, until he sees it for himself just a few miles away, in the hands of billionaire Preston Whitmore. Before he even knows what hits him, Thatch is recruited to serve as a guide for Whitmore’s expedition into the Atlantic ocean in search of the lost city itself, allowing him to fulfill his dream of finding its secret location as well as honoring the memory of his adventurous grandfather.

Borrowing plot devices from close animated comptetitors, Disney twists the story into a remarkable adventure tale with excitement, discovery, conspiracy and irony woven into the mix. Oh yeah, and there’s also several vibrant characterizations used here, too, the majority of them very different compared to those in the recent Disney cartoons. For instance: there’s Mole (Corey Burton), an offbeat but humorous digging expert who would rather spend his time surrounded in dirt than talking to any of his comerades; Vinni (Don Novello), a man who uses explosives to conquer most of his obstacles; Cookie (the late Jim Varney), an old-timer whose idea of a good meal includes lots of grease; and Mrs. Packard (Florence Stanley), some kind of communications expert who smokes incessantly and announces without emotion at several points, “we’re all going to die.” Of course the picture contains its obligatory players—the naive and manipulated hero and the cloaked, merciless villain—but writer Tab Murphy does an impressive job with the situation, writing them to fit the subject matter itself rather than the typical Disney mold. Another shocker: the women characters are all strong-willed and have backbones, unlike many of the recent heroines in the studio’s animated endeavors.

Visually, the picture doesn’t push any boundaries, but that’s perfectly fine, especially since there is currently a debate going on between us as moviegoers about the future of animation: whether there will always be a market for the familiar techniques utilized in annual Disney cartoons, or if it will just die out and get replaced by the more modern forms of cartoonic expression now being seen in the mainstream. Enthusiasm for these new techniques, after all, is high right now, especially after the success of “Shrek” and recent release of “Final Fantasy: The Spirits Within.” But regardless of the advancements that are made with the genre, moviegoers will continue to have a soft spot for the simpler approaches because, well, that’s what they started with. We were raised on the basic visual structures of the early Disney classics, not the dazzling computer spectacles established most recently. Having said that, “Atlantis” is both nostalgic and fresh, a film that occupies a style both memorable and familiar and utilizes effective storytelling rarely seen in cartoons.