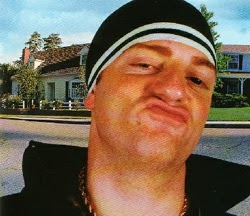 Comebacks are not unfeasible, though, and that's what the focus is behind "The Homeboy," a charming new indie film from Hooligan Pictures. The star is a white rapper whose popularity peaked two years before with the triple-platinum album, "Theory of Sell-a-tivity," but has dwindled without any further releases. He is at a crucial state of his career. His next move ultimately decides his fate. Will he reclaim his lost fame, or fade off into the background like so many before him?

The investigation takes us through the life of MC² (Dave McCrea), a man who fits no specific classification of hip-hop entertainers (except for his own). Though it would be easy to assume he is an archetype for the stereotypical "white rapper" visage—the one in which Eminem and Vanilla Ice can easily be classified under—there's more to him than just public image and bad attitude. He's funny and endearing. He cares about his work. He does what he wants to. He's also the only person I've seen who uses caviar as a dip for Fritos. Something more charming exists underneath his facade of a bad boy, and for 95 minutes, we watch avidly as the story peals off his layers, ultimately revealing something underneath just as human as any ordinary person without fame.

Of course he doesn't see it that way. He's just there to be an entertainer; a "voice," so to speak, for the people. Anxious to be at the top of the game once again in his field, the rapper participates in an interview with TV guru Tallulah Jones (MTV alumnus "Downtown" Julie Brown) to promote the upcoming release of his newest album, a record that, he claims, deals with important issues ("even the ozone layer," he jokes). But the interview becomes rather chilli once Ms. Jones begins to question his "good messages" by pointing out certain violent and derogatory remarks within his lyrics. MC² tries hard to work his way around her points, but it's like fighting a losing battle. Yet the scenes between Julie Brown and Dace McCrea are fantastic together, she as a sharp weapon for journalism and he a soft stick of butter ready for cutting into. In terms of forcing us to take immediate notice, there probably could have been no better way to introduce the movie.

But the story really doesn't begin to unfold until afterwards. MC² has a problem with his sink (a Wentworth), and calls upon a repairman to fix it. The guy who turns out to tinker around with it, though, is no ordinary repairman—he's actually the rapper's once-popular hip-hop idol Hoolie Hooligan (David M. Wallace), who disappeared from the public eye years ago and now makes a living by fixing Wentworths. MC² sees this coincidental meeting as an opportunity to reestablish his own career as well as that of his influence. Hoolie is reluctant at first, but after whimpering like a baby for a few minutes, he then agrees. Not until after MC² takes him in, though, does he realize the enormous mistake he has made. Without revealing too much, let's just say that it's easy to see why Hooligan was removed from the spotlight in the first place.

"The Homeboy" is filled with many subtle but effective quirks and oddities, and many of them help the picture rise above the clichés of the general situations. For example, there is a love story gimmick utilized in the story when MC² is approached by an attractive female waitress at the local Chinese restaurant. He is so impressed with her appearance that he orders whatever she recommends, and during a private conversation just minutes later, he professes his love, asks to marry her, and floats on air when she accepts it, apparently sharing in the feelings he has. The entire twist works not because that they got together so quickly, but the fact that they actually believe they are madly in love. We, needless to say, know the naivety behind their immediate actions, and a marvelous confrontation between the lovebirds and the waitress's shocked parents firmly establishes so.

The majority of the picture is all about this comic timing, and though a few jokes don't quite work (most notably one in which we are forced to hear the agonizing bowels of the weak-stomached main character after he is loaded up on spicy foods), the humor for the most part is delivered very effectively. Many of the script's best shots are with the Hoolie Hooligan character, who occupies the story as if he were the Johnny Rotten of the hip-hop generation, cynical and quirky, with a rebellious attitude intended to bring out fear, but instead only generates amusement.

"The Homeboy" is flat-out amusing, sometimes endearing and often fabulous, with a solid cast, noteworthy characters, delicious dialogue and a wide supply of effective sight gags. But by the end, one detail feels unresolved: what exactly is this movie about? Is it a story about regaining that lost notoriety? Learning from your influences? Helping out someone who needs it more than you? Or finding that you've searched for something you don't really want that much? Though the movie tries hard to establish each of these traits, the focus is incredibly blurred. The movie survives without one strictly based on its other merits, yes, but a more stable narrative center would have been a nice compliment to the package regardless.

Produced and directed by Dave Gebroe; Screenwritten by Rick Kronberg