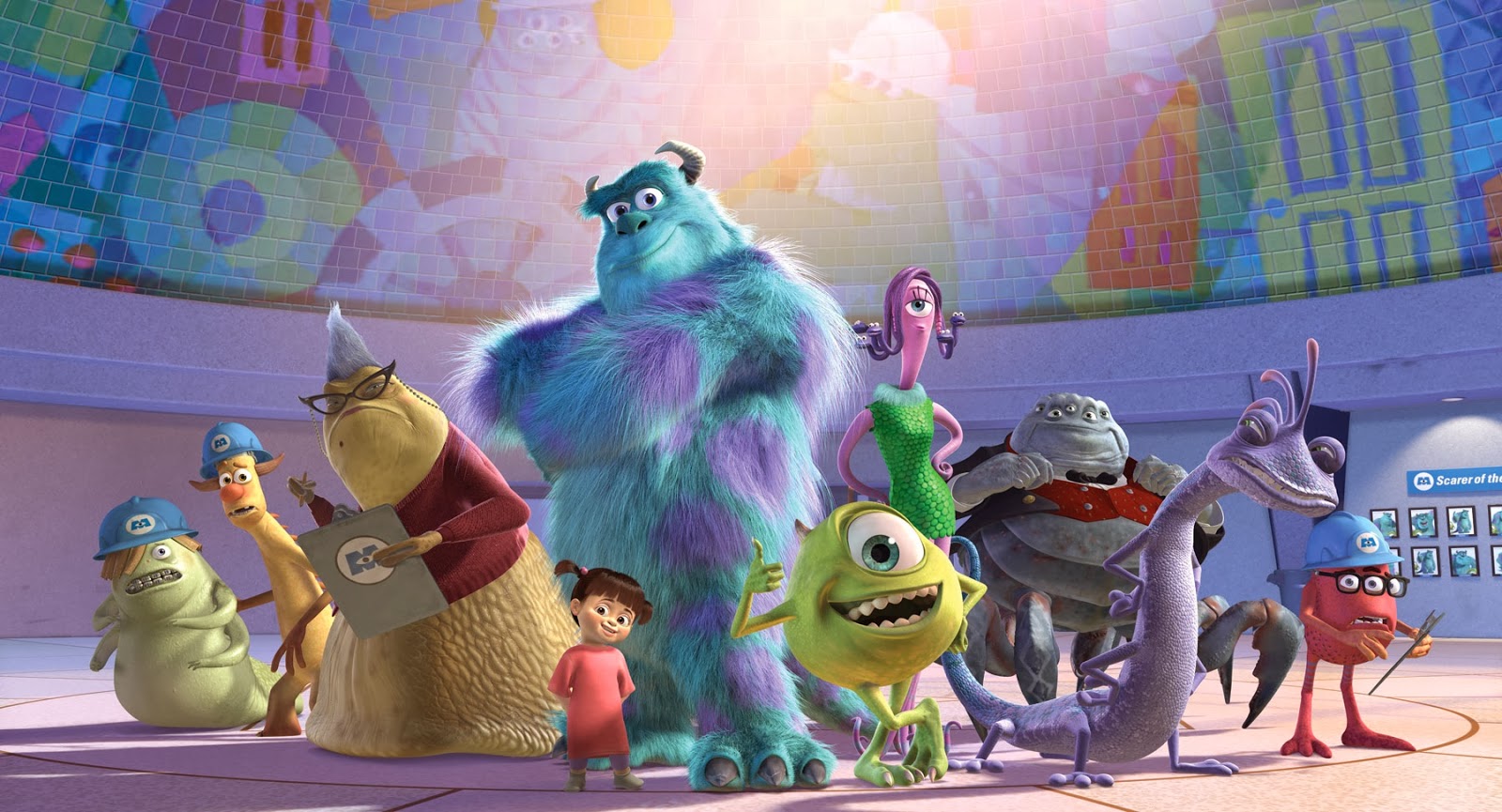 Why do they frighten children, then, if there is a similar fear in them? The movie tells us that their world is powered by the heat of a youngster's little screams, thus making it essential for the monsters to jump out at them and stimulate their shrieking. The job is getting rather tough to do, however, because children, being exposed to the disturbing and violent images on television, are becoming increasingly harder to scare. This puts a heavy burden on the film's main character, James P. Sullivan (or Sully, voiced by John Goodman), a big, blue, hairy (but kindhearted) creature who has the reputation at the local Monsters, Inc. power plant of scaring the most children and collecting the most screams. The majority of the time, his efforts pay off . . . until one day a door connecting their world with a child's closet gets left open, and a cute little girl named Boo wanders into Monstropolis without a shred of fear of any creature she comes in contact with. The most charming development: Boo refers to Sully as "Kitty."

The key to the film's success is that it doesn't simply tell a story, but totally re-imagines an idea. Like "Toy Story" and "A Bug's Life," the previous efforts from the masterminds over at Pixar, "Monsters Inc." tells its story from the perspective of creatures who are completely misunderstood by their sources, namely children. All kids are scared of monsters at night, but what they don't realize, as the plot explains to us, is that it's nothing personal; the beasts are simply doing their job. The innocent logic used here is what makes Pixar's products some of the best the animation market has to offer to begin with, and at a time when the entertainment industry is bound by the restrictions of the hectic outside world, it is a very warm welcome to the movie screen. That doesn't mean it's a groundbreaking film, but it's hardly a bad one, either.

The movie's characters are some of the most interesting ever seen in animation. Sully (Goodman), for example, looks like a cross between a tie-dye shirt and the abominable snowman, and his best friend, little Mike Wazowski (Billy Crystal) could pass off as either an alien or a Cyclops. Many casual animation fans could easily be put off by this quirky visual realization, but not to worry--the movie anchors them closer to reality by using them in ways that reflect our own lives, such as making them workers of a power plant that is struggling to retain its power source (obviously echoing the current power shortages occurring on the US west coast).

On an artistic and creative level, "Monsters, Inc." may be the most visionary, intricate and offbeat product released by Pixar. However, it does not quite achieve the memorable thrust of the studio's other films, nor does it contain the substantial magic of Dreamworks' recent "Shrek." That's not necessarily a bad thing for the younger audiences (especially since the latter film is more of an adult-oriented satire that only looks like a kids movie), but for those who were old enough to marvel the freedom and ingenuity of the studio's previous endeavors, it leaves a little something to be desired. Sure, the concept is bold and fresh (where else have you heard of monsters scaring kids as part of a job?), but the characters don't always execute it as well as they should. Jennifer Tilly does a rather annoying bit as the apple of Mike's eye, and the green creature himself, likewise, is brought down by the overbearing influence of Billy Crystal's standup shtick (despite the fact that the animators, who are only working with one eyeball, manage to animate him in astoundingly expressive ways).

And yet through all of these little problems, the movie remains cute, ambitious, fun, colorful, well-animated, and most importantly, intelligent. Pixar has been known to heighten the creative bar for computer animation in a way that many others have only attempted, and in several ways, they do so here by being less focused on the elaborate visuals and more concerned with the potential emotional depth of the story. Monsters, after all, play a significant role in the life of a child–who live night after night believing that big scary ghouls will be jumping out of their closets to scare them to death.

After seeing "Monsters, Inc.," needless to say, kids might actually start looking forward to those kinds of encounters.