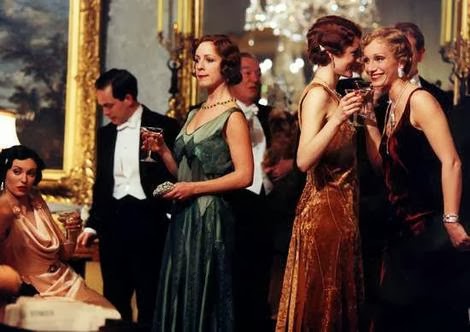 This is extremely familiar territory to most of us, but less orthodox is the approach the screenplay takes in developing its crucial players. The characters are conspicuous and have much to hide, but we are often easily enticed to their secrets and hidden agendas, as they openly gossip, spy, badger and express their opinions on people to an utterly barbaric degree. Furthermore, they are also some of the most selfish, cruel and bitter people we will ever see in a movie of this flavor. At one very amusing point of the film, a screen actor is asked how he can stand being near people who are so snotty and egocentric. Without hesitation, he cheerfully rebukes, "you forget that I get paid to impersonate them."

As the movie opens, a string of guests begin to descend onto the grounds of a secluded estate in England, where hosts Sir William (Michael Gambon) and Lady Sylvia McCordle (Kristen Scott Thomas) are preparing their closest aristocrat friends and family members for a weekend of sport shooting. As they arrive in fancy old cars with servants at their sides, the camera pulls us into the busy and narrow hallways of the manor, where members of the staff nervously scurry through the corridors to direct their visitors to the proper living conditions. As the evening winds down and guests settle in to their rooms—servants share quarters upstairs while the rich folk have their own on the bottom floors—we begin to descend ever so subtly into the surface-calm plot and become acquainted with the briskly amusing players.

Among the 32 major individuals featured in "Gosford Park," we meet Mrs. Wilson (Helen Mirren), the seemingly somber head of the staff, and Elsie (Emily Watson), the head maid whom every other worker turns to when in need of instruction. We become acquainted with Constance (Maggie Smith), the rich and snotty sister of Sir William, and Robert Parks (Clive Owen), a valet who spent is life in an orphanage and may have a secret connection to one or more members of the household. Furthermore, we even discover that among the guests of the house are Ivor Novello, a prominent American Actor, and Morris Weissman, the Hollywood director famous in the early 1930s for his Charlie Chan films.

There's a lot to learn about most of the individuals parts, but one common attitude most of the house guests possess is their opinion on Sir William, whom they view as nothing more than a pitiful old man with little excitement in his life other than his own dog. Even his own wife, Lady Sylvia, who seems to be quite aware of his affair with the head maid Elsie, is detached from caring; in fact, even his own death isn't enough to discourage her from affairs on the side, and she takes up quickly with Weissman's servant Henry (Ryan Phillippe), who fancies himself a lady's man and attempt endlessly to get better acquainted with many of the house's female guests throughout the picture.

Much to the disagreement of countless film critics, Altman's credentials as a director have been less-than-stellar in the recent past; he not only made the inane and dreary "The Gingerbread Man," but was also responsible for "Cookie's Fortune," a film that felt overly-busy and incredibly flat. Like that film, "Gosford Park" is credited with having a large-name ensemble cast, but unlike the former endeavor, this movie benefits from not just solid character development, but genuinely-layered storytelling as well. The script by Julian Fellowes utilizes every personality to a realistic advantage, eventually overlapping their own individual stories so effectively that we never see the seams. Inarguably, this approach ultimately benefits the heart of the story—the murder mystery—which could have easily seemed like an anticipated gimmick had the players been portrayed with the salient finesse of typical "Clue" game personalities. The layered identities of all those involved in the plot are a legitimate excuse to the inclusion of a homicide; we see that William is a man hated and disliked by so many, and it's a wonder his murder didn't happen any sooner.

It would be an utter tragedy if the film were to miss out on major Academy Award nominations next February. Aside from a script that builds dynamics to an exceedingly observant level, the movie is richly textured in costumes and set design, from the intricate sectors in which the highly-dignified amuse themselves to the dark and dingy underground halls, where incessantly busy servants gather to catch a breath of relaxation. Every detail is precise and careful in the cinematography as well, as the camera rolls through the manor, watching the characters almost carefully enough to seem like a hidden stalker. Lastly, most of the actors come across brilliantly in their roles, most notably Stephen Fry as a clumsy, incompetent inspector searching for suspects in the murder investigation (if you have a good memory, you'll not that Fry also played Oscar Wilde a couple of years back in a sorely underrated bio-pic of the playwright).

In a year bursting with very few remarkable achievements, "Gosford Park" emerges as one of the best and most engrossing features of 2001.