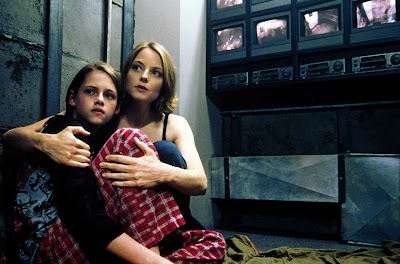 All comparisons to the director's other works end, however, beyond this point. While the movie has the definite Fincher thumbprint in terms of style, its scope is much more simplistic compared to the flamboyant narrative structures of its distant relatives (notably "Fight Club"). It's also a stronger picture than the advertising campaign promises, a thrill ride so serenely pleasing and effective that it reminds us of the days when Alfred Hitchcock was still cooking up tricks behind the camera.

As the movie opens, recently divorced mother Meg Altman (Jodie Foster) is examining the many features of an upstate New York apartment she is preparing to buy. Her Realtor informs her of the presence of a "panic room" behind the master bedroom, a secret corridor that can hide the property's inhabitants from outside harm (such as burglars) whenever they need the protection. Meg and her daughter Sarah, naturally, don't see much significance in having the room there (other than the use of potentially-valuable surveillance cameras), but the very first night in their new home, a trio of thugs bust into the apartment, alarming both mother and daughter and forcing them to seek security there.

"Take what you want and get out," she tells the three men via an intercom. But they aren't that easy to persuade, as it turns out, because what they want—a massive fortune left behind by the previous owner—is actually inside the panic room itself, and they will do whatever it takes to get inside.

The conflict created by the premise is hardly the most complex one to comprehend, but it firmly constitutes the famous theory that less equals more. Unlike so many thrillers of the recent years, "Panic Room" never overplays its material or resorts to supernatural elements for its payoff; the success lies in the sublime conviction of the screenplay, which uses realistic characters in realistic settings to set up a situation that can, very possibly, be real itself. Furthermore, the movie doesn't bother resorting to a lengthy introduction before it tosses us into this hectic world; barely ten minutes have passed by on-screen before we find ourselves knee-deep in the discord.

The villains themselves are played by Forest Whitaker, Jared Leto and Dwight Yoakam, although the latter two are almost unrecognizable thanks to rather eccentric physical transformations (Yoakam actually spends most of the picture behind a mask). Their performances, nonetheless, are each uniquely fascinating, with Leto and Whitaker as seedy crooks lacking the backbone to harm others, and Yoakam as a ruthless addition to the group that may have more plans up his sleeve than the other two realize. This, needless to say, compliments Foster's portrayal as a vulnerable mother with the facade of a fearless independent woman extremely well, and even when both sides can only bitterly argue through the intercom system, it's very convincing.

Fincher's deliciously restless world of cat-and-mouse is further illuminated through spectacular technical achievements, including cinematography that moves through corridors and small spaces like an ambitious stalker, effortlessly maneuvering the most troublesome obstacles (in fact, the movie's antagonists are introduced through a breathtaking single camera shot that swoops up and down floors as they try to break in). The editing, likewise, is solid and adds to the tension; in fact, the movie's best and most thrilling sequence takes place entirely in slow motion, as Meg slips out of the panic room to retrieve a cell phone before her enemies return to find her.

If the picture contains a major fault, alas, it is the bland conclusion that accompanies all this excitement, which feels like it is being forced on us merely to provide the audience with a sense of closure (which ultimately isn't very necessary). But a small detail like this shouldn't detract some of us from potentially thriving on the experience of a tame but worthwhile thriller. "Panic Room" is taut, convincing, stylish and edgy cinema, and though it's far from being Fincher's best screen work ("Seven" still has the distinction of being his masterpiece), it's a movie that can work for almost anyone on several different levels.