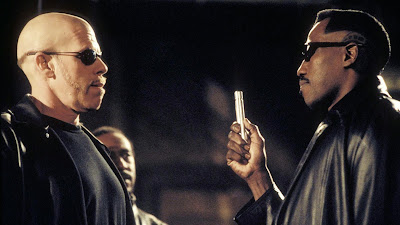 The audience owes a certain amount of respect to movie vampires, who were born in Hollywood's golden age and have managed to survive in a time when their essence has veered from original to routine. Few big-screen creatures can claim the distinction of persisting as long, and though we tend to dismiss the mighty bloodsuckers as walking clichés as of late, we still find ourselves embracing their existence, ignoring potential forewarnings in the often-misguided hopes that they can recapture their inventive potency.

Such factors are obstacles that few ambitious vampire flicks are able to conquer, but with "Blade II," the long-awaited sequel to the highly-successful comic book adaptation, an approach is undertaken that not only rejuvenates the quintessence of the being, but evolves the creature itself into something so disturbing, so dangerous and so foreboding, that standard vampires become allies rather than enemies in the hero's quest to conquer the opposition.

The movie is the product of surprisingly thoughtful direction; under the helm of Guillermo del Toro, who did the atmospheric "Mimic" a few years back, it's fresh, cohesive, well-paced and observant, crawling into the mind and achieving the sort of pulse-pounding excitement that made the original film such a worthwhile experience. Though the second offering in this franchise is less visually stimulating than its predecessor (and sometimes a little too broad with details), one has to admire the endeavor; unlike so many other sequels in the vein of this kind of gritty action material, this is a picture that, rather than approaching a familiar structure of the past, tries (and succeeds) in expanding its creative horizons.

The picture opens as a mysterious cloaked figure is guided through dimly lit corridors of a local Czech Republic blood bank. Receiving hasty treatment by doctors (who seem thrilled at the idea of drawing blood from him), the ominous man quickly and mercilessly disposes of the attending physicians by typical vampiristic means: biting on the neck, tossing others across the room, etc. But this rather odd-looking creature isn't your everyday kind of bloodsucker; in fact, there is a moment early on when he unremittingly announces, "I hate those vampires."

Later, as we are told through a roundup of protagonists and old-fashioned vampires (which, believe it or not, takes place in a city of vampires intricate enough to warrant its own motion picture), the traits that create a bloodsucking creature have made a mysterious evolutionary leap, resulting in the materialization of "Reapers," creatures that victimize both humans and vampires to satisfy their immense cravings for blood (the movie even compares it to drug addiction). Unlike their distant cousins, however, the newly-emerged bloodsuckers have developed defenses against weapons like garlic and piercing silver bullets, which only makes the efforts of the hero and his assemblage of partners much more challenging.

Blade himself, once again being played by Wesley Snipes (who is perhaps more suited for this material than anyone else in his profession), is the same "day-walker" that we all know and admire from the first movie; a half-vampire of sorts who is stern, swift, wise and cautious of his surroundings (including his companions, who have buried agendas that refuse to die in the face of terrible dangers like these). Along for the ride in his relentless quest against the enemy are Scud (Norman Reedus), a thriving young technician who isn't nearly as brilliant as he'd like to think he is, and Whistler (Kris Kristofferson), the hero's closest companion who, as we learn early on in the film, didn't actually die in the first movie as we had thought (although the more you think about it, off-screen suicides aren't really that reliable).

The reapers themselves, hard to imagine from a basic description, embody characteristics of not only a standard vampire, but of zombies, aliens, and the creature in "Predator" as well. Their most distinctive characteristic is their lower jaw, which splits down through the middle of the lip, revealing inside two sharp teeth loaded with enough poison to paralyze the victim while the hunter feeds, and a kind of round splintered tongue that any venomous reptile would be envious of. Don't assume, however, that the horrendous look of the reapers in action is simply an act of tasteless special effects tricks; unlike most movies with this kind of visual approach, "Blade II" succeeds in conveying its new creations with a sense of fear and amazement, leaving us gritting our teeth at the very thought of having one of them wrapped around our own necks. Show me a movie when you last felt that kind of foreboding sensation, and I'll show you a silent film.

I could go on just about the effective look of the evolved vampires themselves, but that might spoil further a potentially large surprise. Besides, it's not as if this is the only thing going for "Blade II"; the writing is topnotch, the plot twists are interesting, the cinematography is vivid, and the cast, which includes more new faces than old (only three actors from the first film make repeat appearances here), is well suited for the physically demanding stunt work and swift action sequences. The movie is hardly a perfect one (a lot of the dialogue, for instance, is shouted in blurbs that feel ripped from a Michael Bay film), and it certainly can't be seen as something more than a really solid popcorn flick. But at a point when the movie theater offers little to no genuine thrills, this is one of those movies that satisfies most of our cravings.