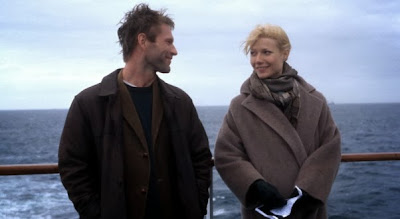 When you contrast that post-Freudian reality with that of an earlier age, you begin to see just how far the scope of relationships has gone topsy-turvy. In ways, that's the immediate goal behind "Possession," a film about two love stories set in seemingly opposite time frames, and how the harsh realities around them can shape the directions and outcomes of two people engaged in passion. Indeed, what does it take for a kind of relationship to survive in any kind of angst-ridden atmosphere? Where are the parallels and differences drawn between the two? And will the results of one always reflect the other? If you have answers to those questions, unfortunately, then you're probably too much of an optimist to even think of seeing the picture.

The movie is LaBute's fourth major screen venture, an interesting and dramatic divergence from his previous material that, despite being meticulously scripted and passionately directed, somehow never quite reaches the enthusiastic thrust of his previous efforts. The film being less character-driven and more plot-dependent is our first clue to this misfortune; in the past, LaBute's pictures have succeeded not because they draw from marvelous and complex screenplays, but because the players involved in the stories react to their situations in extremely unconventional, but observant, ways. Consider the audacity of the main characters of "In The Company of Men" or the subtle tyranny that surfaces with those in "Your Friends and Neighbors"; in such an atmosphere, we don't care nearly as much about the chain of events as much as we do about the participants. In "Possession," those kinds of traits take a back seat to storytelling, and though that's not really a bad thing, it can be somewhat distracting if you're looking for a character to convey the slightest little quirk.

The picture opens with us meeting Roland Michell (Aaron Eckhart), a young American scholar in London who is studying the Victorian poet Randolph Henry Ash (Jeremy Northam) as part of his fellowship under the direction of an English college professor. During a visit to the London library, he uncovers a stash of papers wedged in an old book about the late romantic, all of which seem to be written by Ash himself. Believing that this mysterious letter has gone on unknown to historians up to now, he snatches the pages and begins an investigation on them.

Careful studying of the writing leads Roland to conclude that the letter was written to Christabel LaMotte (Jennifer Ehle), a female poet of that time who, prior to the discovery, was never thought to have a connection to Ash. He takes his findings to an English academic named Maud Bailey (Gwyneth Paltrow), a researcher of LaMotte's work who also happens to be a family descendant. Maud considers Roland's theories about the link between both poets bizarre and illogical, but when they both investigate the possibility further, they uncover much more than they ever thought possible.

Meanwhile, the movie flashes back to a century earlier when both Ash and LaMotte were alive. He a married man and she a bisexual in a relationship with another woman, they meet by coincidence at the peak of their artistic success, striking up an infatuation for one another that, in typical form for romanticism, leads to a forbidden but passionate love affair. Intimacy, sadly, tends to be followed by great loss and suffering, and as Roland and Maude's quest in current time reveals these details little by little, they get caught up in the web of forbidden love themselves.

As a two-tiered love story creating parallels between the past and the present, "Possession" is gifted with complex and astounding writing. LaBute's script, co-written by David Henry Hwang and Laura Jones, allows two love stories to unfold on top of each other without over-dramatizing or applying too much stress, calculated so that even the slight details can dramatically change the course of events. Where it all fails, unfortunately, is with the movie's characters, who don't have much gusto or charm outside their knowledge of poetry. Aaron Eckhart, who has been in all of the director's films now, has some minor fun with the Roland character (especially when he's stealing things that he shouldn't), but on the whole is nowhere near as memorable as he should be. Paltrow, meanwhile, suffers a major blow by appearing as one of the most boring LaBute characters ever created for the screen, a woman who is so caught up in the post-Freudian reality of romance that it's no wonder she's still a single. No, this is not a bad film because the story's players lack dimension or flair, but had the characterizations even came close to matching the film's fabulous narrative structure, then we could have been dealing with a real winner here. As it stands, "Possession" is a very decent endeavor that misses the mark of a truly fantastic LaBute work.

Drama (US); Rated PG-13 for sexuality and some thematic elements; Running Time - 102 Minutes