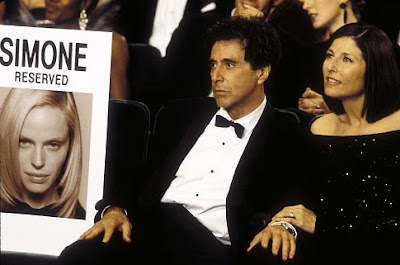 As much absurdity that the material contains, however, the above rant shouldn't create the impression in any way that the film is a bad one. "Simone" is brilliantly creative and hilarious, a wild and silly farce that holds nothing back in its gutsy attempt to abandon every ounce of sanity in a two-hour running time. The premise is harebrained and its conviction undeniably preposterous, yes, but that's just groundwork. The movie doesn't want to be taken seriously in the least; it simply wants to have fun with the concept, a wise and effective approach considering just how easy it would be for most filmmakers to try and manipulate the audience with this stuff.

The movie stars Al Pacino as Viktor Taransky, a major motion picture director whose latest work, a remake of "Sunrise Sunset," is on the brink of failure after its star actress walks off the set in the middle of production. Although he is confident that a finished product is salvageable in what has already been filmed, the studio puts increasing pressure on his efforts by demanding a cut of the film without using footage of the defective actress, otherwise his contract could be terminated (his ex-wife Elaine, played by Catherine Keener, is one of the important bigwigs of the company). Without any kind of financial backing left for the film, however, Viktor begins to lose all faith in his movie seeing decent success... until he is stopped outside a sound stage one day by a devoted but near-death fan who claims to have the answer to his threatened chutzpah. When the mysterious guy turns up dead a week later, Taransky is sent a computer hard drive containing the blueprint for a digital blond actress, whom he names Simone (a combination of the words "Simulation One").

Nine months later (as the movie so clearly points out), Viktor re-screens the movie with this digital beauty starring in the lead. The response is overwhelming; test audiences fall head over heels for its heroine, high hopes are expressed by the distributors, and soon the media is buzzing with wonder about the unknown star who is capturing hearts literally overnight. Taransky, of course, doesn't let the media know of his secret, and they in turn don't question her existence. Actually, no one even contemplates the possibility whatsoever; no, not even when Simone herself seems to refuse public appearances and hides away from most human contact. People speculate about the mystery and wonder of her lifestyle as a result, of course, but they don't really think anything suspicious, which is just fine for the director.

Trouble begins to brew, however, when the public begins demanding more and more of Simone, and not just on the screen, either. To keep up his charade without letting on to the mystery, Viktor launches a slew of carefully-manipulated television interviews (via satellite, needless to say), magazine photo spreads, a pop CD release and even a world tour to promote it. How one man manages so much without resulting in complete chaos is one of the absurd joys of the movie, so revealing his methods here would be a devastating blow to its impact on potential viewers. What can be said, though, is that the public is never once led to believe that she isn't a real person; in fact, when Taransky actually tries to come clean with the authorities at a crucial stage of the plot, no one actually believes him.

The sheer audacity of a movie like "Simone" seldom comes across with any kind of success, and with good reason; not only does it suspend logic for complete nonsense, it also forgets that there is even a reality off of the screen watching it all unfold. But the zany efforts on the part of writer and director Andrew Niccol are zealous, not careless; his admirable flair for the quirky and downright insane elements is overwhelmingly bright and cheerful, and yet not to the point where the movie doesn't make a shred of sense (incidentally, he also wrote the screenplays for "The Truman Show" and "Gattaca," two more movies that were also embellished beyond credibility). Comparing "Simone" to his previous work, we see a man who is incredibly talented at making solid social statements through the use of absurdities and abstract reasoning; Hollywood should be proud to have him in their company.

If there is something convincing that "Simone" is trying to say, it's that the general moviegoeing public can't possibly be dumb enough to believe that digital filmmaking could advance far enough to make CGI-rendered human actors look almost genuine. The concept is, and probably always will be, completely ridiculous, and that ulterior motive results in one of the year's most entertaining and memorable pictures.