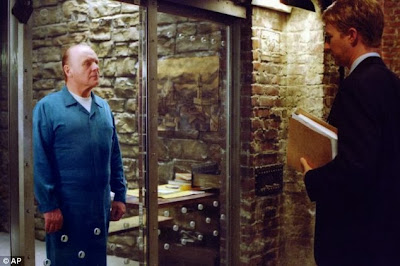 "Red Dragon" is the audience's third encounter with this devilish doctor (the fourth if you count the original version of this film, "Man Hunter" by Michael Mann), and unlike its predecessor, last year's solid but curiously shackled "Hannibal," it relishes the opportunity to investigate its players not as villains or victims, but as humans who simply live their lives a certain way. When the movie opens, Lecter is sitting in the audience of a classical music gala, observing what we think might be his closest friends conducting the orchestra. He takes notice of one particular player in the band, whose instrument is off-key, and begins to twitch his eye in brewing frustration. The next scene that immediately follows begins with Hannibal entertaining the company at the dinner table, all of whom still discuss the mysterious disappearance of that particular musician just a few days before...

Hannibal's behavior, obviously, didn't keep him a free man for very long, and after the movie toys with that notion in the prologue, he is captured quite accidentally by Detective Will Graham (Edward Norton), an FBI agent studying ritualistic murders with the help of the doctor's psychiatric knowledge (although not yet at the realization that Lecter himself is the man behind the crimes). Graham's near-death experience with the mad cannibal forces him to reevaluate his life, and after recovering from serious wounds inflicted by Lecter he resigns from the FBI and relocates his family far away from the business, occasionally serving as a consultant with former associates on cracking new cases.

The movie's plot, however, doesn't deal with Lecter in the manner that we think. Like "The Silence of the Lambs," the notorious cannibal is appointed the unlikely alliance of a detective seeking to solve a serial murder. Naturally, that particular detective turns out to be Hannibal's own captor Graham, who is reluctantly lured back into the FBI by detective Jack Crawford (Harvey Keitel) because of a murder case in which many details are either overlooked or never discovered. These killings, carried out by the media-dubbed "Tooth Fairy" killer (Ralph Fiennes), involve the slaughter of an entire family via gunshot wounds, and then the dissection of certain body parts on some of the victims' cadavers. Each set of murders up to that point are neat but not entirely perfect, which Graham is instantly able to pick up on by investigating the crime scenes. Consulting with Lecter on the psychological aspects of the case, he is able to begin piecing together the mystery in hopes of capturing the killer before he strikes again.

This all may make "Red Dragon" sound like some cheap "Lambs" knockoff, but the movie is anything but. In fact, just the opposite is true in this case; the film is tightly woven and expertly directed by Brett Ratner, who peers down on his subjects not like he's trying to replicate Jonathan Demme's style, but rather like someone who is searching for (and finding) his own distinctive identity. The script, furthermore, is everything any decent director could hope for: firm, dramatic, expertly balanced and rather remarkable in its delivery.

The movie's scribe is Ted Tally, the same man behind the riveting narrative of "The Silence of the Lambs," and it shows. Aside from replicating the subtle but brilliantly unnerving essence of that film, the screenplay is also deeply involved in exploring every possible angle of the events, sometimes creating side stories along the way that not only work on individual terms, but also compliment the whole package as well. The subplot involving Fiennes' character, a deluded madman with a deeply hidden soft side, and a blind love interest played by Emily Watson is such a story, substantial enough to weigh certain issues of the central plot in addition to providing a different arc for two of the film's characters to follow. Furthermore, Watson and Fiennes are wonderful in their roles here, both playing quiet and misunderstood people who seem to be the only ones who could understand and appreciate each other.

Did I forget to mention how great it is to see Hannibal Lecter in this picture? Hopkins' thirdventure into this character's psyche is nearly as solid as his first, sharp and daunting even during the moments when engages in seeming pleasant conversation with his former government adversary. Norton returns the favor in a role that is given great depth by introspection and massive insecurity, and when both of them react to one another's comments, they seem to be echoing the chemistry that Hopkins and Jodie Foster mastered the first time around.

Incidentally, the title "Red Dragon" refers to the mythological persona which the Tooth Fairy adopts as part of his killing spree, a creature that we hear of only in brief passing during the film, but nearly see in full glory when Fiennes' character strips down for a captive reporter, turns his back to the camera and reveals a massive tattoo of the being smeared all over his skin. "Open your eyes and see me," he insists to the frightened and hesitant reporter, but like that poor guy bound to the chair, the audience's fear of looking still doesn't stop them from doing so in rather amazement.