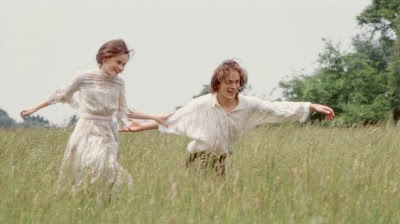 "Tuck Everlasting" is based on a young adult story of the same name, a book that I'm not acquainted with written in the 1970s by Natalie Babbitt. Going into the promotional screening were spectators galore confessing how much they admired the source material, but if the movie itself is anything to go by, I doubt I'll be making a special trip to the bookstore anytime soon to discover what all the hype is about. The plot deals with the family of Tucks, a bunch of hermits who share little to no contact with the outside world because of the deadly secret they so cautiously carry: the fact that they were made immortal by drinking from some sort of a fountain of youth years before. The family consists of Angus (William Hurt), the doting father figure, Mae (Sissy Spacek), the passionate and crafty mother, Miles (Scott Bairstow), the temperamental son, and Jesse (Jonathan Jackson), the kid who always seems to be in a hurry to get nowhere. Their biggest obstacles lie with those who might expose their whereabouts in the outside world (the movie's principle example comes in the form of the "Man in the Yellow Suit," played by Ben Kinglsey), but bigger conflict comes to pass when the Tucks establish solid bonds with these kinds of people, who might not understand their secret, and will probably succumb to age even when the Tucks themselves are forced to live an eternity and watch everyone around them perish. To them, never-ending life isn't much of a blessing, but more like a devastating curse.

Unfortunately, none of that dawns on the heroine of the picture, Winnie Foster (Alexis Bledel) until after she's fully acquainted with the reclusive Tucks. She wanders into their hidden abode quite by accident early on in "Tuck Everlasting," and immediately becomes attached to Jesse, the youngest son of the family. Jesse returns the favor quite well despite his cautious brother's warnings about connections with mortal humans, and it never dawns on Winnie that he, or any other member of the family, is hiding something. When the truth is finally revealed, however, Winnie finds herself at the center of a tough but important decision; should she join the Tucks in their everlasting existence by drinking from the fountain, or eventually die a human and force her good friend Jesse to stay behind and mourn?

This isn't a bad plot line, mind you, but the problem with "Tuck Everlasting" is how it manages to present the idea in such dry and moody circumstances. The script hesitates in developing any of its key characters beyond their essential plot duties (which are minor to begin with), and then it fails to involve them in anything really exciting or noteworthy. Winnie barely speaks a line of dialogue in the picture that doesn't involve a tantrum or a pout, while the Tucks, with the possible exception of Miles, stand in the foreground talking about their "curse" without actually seeming to believe what they're spouting. Kingsley's character, meanwhile, the halfhearted antagonist of the movie, is mostly a wanderer and nothing else; he wanders in the woods, smokes, wanders some more, whines about age and eternal life, and then wanders all over again. Like his persona, the film itself kind of lags behind on the same dirt trails over and over again, looking around at all the pretty sights without actually going towards them to investigate.

There is, at least, a positive side to the film unlike most of Disney's recent failures. The look of the film is quite a beautiful one, with little cottages decorated in colorful heirlooms lining the edge of backyard lakes, and giant town houses sitting off the road behind tall and dangerous-looking metal fences. There too, however, is an accurate reflection of what is truly wrong with "Tuck Everlasting"; the big fascinating house may be there, but the gate is locked and has no intention of letting sightseers in to gaze at its glory.

Fantasy/Family (US); Rated PG for some language; Running Time - 88 Minutes