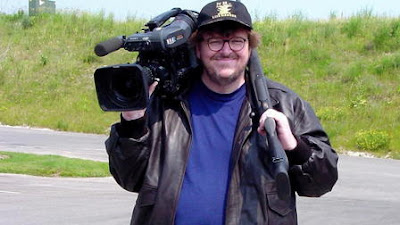 In the documentary world, such subjects are almost impossible to tackle without the intervention of personal bias. Consider, for instance, the result if someone like Anton Lavey were to make a film about Christianity or the origins of the Bible. To assume that there can be objectivity in regards to our violent America is to destroy any hope of a successful movie being made about it. But with "Bowling for Columbine," the new film from Michael Moore, an amazing feat is accomplished: inevitable prejudices are balanced alongside a twist of impartiality. In this wildly startling look at the rapid decline of the American moral system, we are guided into the path of a man who knows little about the subject other than his own instincts, and though his destination has a few shameless angles along the way, it nonetheless provides an interesting and savage insight. The movie is startling, thought-provoking, brave and aggressive, and no doubt one of the year's most brutally brilliant efforts.

In the first scenes, Moore invites his cameras into a small local bank offering an intriguing deal for anyone who signs up for a checking account: a free hunting rifle. Merely asking the desk clerks "Don't you think it's dangerous to just let people have these things?", he begins a solid but often veiled argument against the obsession with these weapons, followed perhaps inevitably by interviews with James Nichols, the Michigan-based radical who was acquitted of charges linking him to the Oklahoma City bombing years before. Nichols concludes his somewhat freakish rants with the statement, "there's a lot of wackos out there!", but the irony has already settled in enough to make the message clear: men who confidently stride through life attached to deadly weaponry often go ignored by larger societies.

The movie uses that prospect to platform us into the documentary's core subject: the violent shootings of Columbine High School, shown here through rare surveillance footage in a shocking (yet astounding) five-minute sequence containing no dialogue. In the background, an acoustic instrumental version of Marilyn Manson's song "The Nobodies" can barely be heard, but its presence is enough to further explore the subject beyond just the killings themselves. Many will easily recall how certain subjects in the entertainment industry were fingered for the tragedies, and Manson's was perhaps the largest, most scathing... and most unfair. "What would you say to the Columbine kids if they were here today?", Moore asks before one of the shock-rocker's Denver concerts. "I wouldn't say anything," he earnestly replies. "I would listen."

Other specific timelines are implored to build the case against guns as well: quick but jolting American timelines done entirely as cartoons scrawl across the screen like stabs against our ancestry, and a shooting in the Midwest that killed an innocent elementary school girl, in particular, strikes a nerve because it represents the second time in a relatively small time frame when kids have brought the adult sport of violence into the classroom (not to mention the second time when Charleton Heston conveniently brought his NRA convention into town just shortly following the incident). What does the movie think of Heston in this grand scheme? Ah, but that's for the documentary's final act to decide, and when Moore confronts the famous actor head-on with these rather cold facts rather cleverly by first introducing himself as a lifelong member of the NRA, the once-gargantuan actor of the past is reduced, perhaps a little appropriately, to a mere coward.

Michael Moore isn't one of these rebellious anti-capitalism people who seems to think America is in major debt to karma, though; he's simply a man who loves his country enough to want change for the better, no matter how extensive it may need to be. Though "Bowling For Columbine" is inarguably antigun on several of its issues, particularly during the sometimes slow middle act, and even a little egotistical during a few setups—the K-Mart sequence is definitely forced—Moore's courage makes the thrust something of an objective one, provoking and arguing against accepted theories not because it has hidden agendas or biases, but because it wants the audience to see a side of the story that is still too feared to be talked about openly. "Bowling For Columbine" works remarkably as a documentary, but that's all just ground work, it turns out, for the shocking, harsh and perhaps destructive reality that is exposed beyond the initial facades. This isn't just a great endeavor for study purposes, but also one of the most important.

Documentary (US); Rated R for some violent images and language; Running Time - 120 Minutes