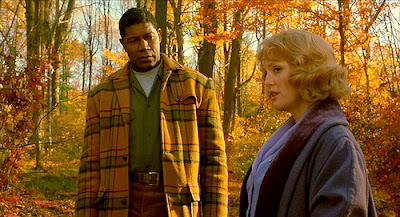 The film is very much in the vein of the now-classic dysfunctional family drama, juggling the outlines and some specific themes from "The Ice Storm" and "American Beauty" like an older relative that is being rediscovered. The important thing to remember, perhaps even more than the fact that both of those movies were far more in tune with their ideas, is that "Far From Heaven" doesn't actually follow a specific strategy or agenda with its material. For a good hour, Haynes' screenplay pushes itself onto the viewer without all the cheap tricks or contrivance normally expected of movies with this sense of old style (even the aesthetics are drastically toned down, as proven by the movie's PG-13 rating). But just as the engrossing conflicts start to simmer onto the surface, everything gets yanked back down by a shoddy climax and halfhearted resolution, and the once-captivating experience suddenly becomes another missed opportunity with brief moments of masterful craftsmanship. That didn't stop me from appreciating the result overall, but it did prevent me from raving about it like so many others have done.

The movie is primarily a star vehicle for Julianne Moore, an actress whose recent stints in cinema have no doubt paved the way for a long and bright future in the movie industry. She plays the mild-mannered Cathy Whitaker, housewife to a successful businessman named Frank (Dennis Quaid) and mother to two very bright and spunky children. She's pretty, vivacious, charming and sweet to all those around her. Newspaper photographers and writers melt whenever she is in the room, and the local gardener Raymond (Dennis Haysbert) is instantly won over by her charm when she introduces herself following his unexpected hire. But not is all right in the picture-perfect, sitcom-style world she has immersed herself into, and that's where the movie gets interesting.

On occasion, she and her circle of friends, the closest being Eleonor (Patricia Clarkson), get together to privately discuss their latest adventures in the bedroom, and during one early on in the picture, Cathy remains dead silent while the other colorful stories send shock waves down the spines of her friends. This, we gather as soon as it happens, is standard practice for the spirited woman, and Eleanor even detects a little envy in her when friends marvel about how wonderful their husbands are behind closed doors. Cathy, as expected, brushes off the worry because she is sure it's a temporary problem, but when she goes to her hubby's office during one of his late-night planning sessions to take him his dinner, she finds him in the arms of another man.

The movie turns its distortion of family life into blunt—but forbidden—love stories. In brief: boy meets girl, boy can't please girl, boy meets other boy, and girl falls for other boy whom she can't have. To be more specific: Frank realizes he's homosexual and can't be an accommodating husband to Cathy, although he certainly tries via medical solutions (remember, this was an era when being gay was actually linked to imbalances in daily vitamins!). As a result, dear sweet Cathy turns her attention onto the one person who is willing to listen: Raymond the gardener, who just happens to be African American (also remember that this was an era when mixed relationships were a big no-no in society). Where these widely-secluded relationships go, understandably, is an irrelevant issue; as a director and writer, Haynes is more interested in examining the social climates that prevented them from being accepted in the first place, although he does tend to work a little under the potential during a few important patches (particularly with the conclusion, which feels like it was simply slapped on at the last minute without any planning or forethought).

Moore's performance as the crumbling housewife is the most heartbreaking and brilliant of the year, a work in which her character is emotionally overthrown by a world too primitive and unrealistic to really know what happiness is. Dennis Haysbert's, meanwhile, isn't an overstated or generic one like so many thespians might have made it, and even during isolated scenes, he comes off as one of the most likable characters of any movie in this setting. The cast's only weak point, essentially, is Quaid as the guy-loving family man, who proves during most of the picture—with the exception of one or two scenes—that his crotch isn't the only thing that can be stiff.

Though I speak very morosely of the screenplay's underwhelming payoff, "Far From Heaven" did not totally throw me off its radar; in fact, the visual splendor and elegance of the picture alone are reason enough to endure repeat viewings. The film's art direction and cinematography evoke the shrill of visual energy found in the classic Douglas Sirk films of the 1950s, while the use of costuming and makeup transports the viewer back 40+ years as if it were only a mere breath behind them. All of this linked with a few respectable plot points and some near-flawless works of acting makes the experience of "Far From Heaven" quite a respectable one, if not a completely brilliant one. In the end, it all really comes down to whether we actually believe events like this would play out in the 50s the way they do in this movie. I didn't believe everything the picture was telling me, but I seriously wanted to.