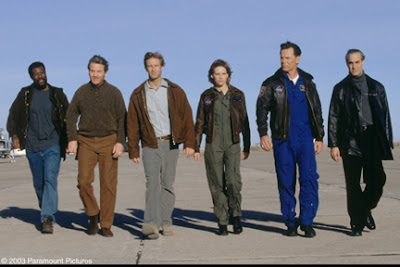 Once all cynicism and logic is left at the door, though, "The Core" appears to have something going for it. The movie quickly and bravely embraces its implausible nature, gyrating on the curbs of absurdity from one scene to the next without so much as a regret or a second thought. Indeed, when Earth suddenly becomes a playing field for radical natural disasters (including a lightning storm that destroys Rome and a scene where birds go on a rampage a la Hitchcock), the very idea that a concept like this could be approached seriously is ridiculous in itself. That's excusable. What is not so plausible, however, is the direction the movie takes subsequently—shortly after the conflict is established by the film's key heroes, the plot moves us on into the planet's interiors, a realm, surprisingly, that turns out to be so boring and lifeless for both character and audience, it drags down the potential for a thorough payoff. This doesn't mean the movie doesn't have its enjoyable moments, but they're farther in between than they should be, and a lot of the remaining material would be dead weight even in the really bad disaster pictures.

The film stars Aaron Eckhart as Dr. Josh Keyes (!), a geologist professor who is summoned by the United States government to offer his insight into a mysterious circumstance that may have something to do with Earth's electromagnetic field (the first scene of the movie, a document of this particular event, shows men and women mysteriously dropping dead all at the same time during Boston's Green World Day, supposedly related to the fact that the victims all had pacemakers). Keyes offers his explanation and then shrugs the scenario off... until other odd circumstances across the globe involving similar explanations (like the aforementioned violent bird incident) start showing up. With an idea in mind, he undergoes some heavy duty research on the events and their potential links, and presents a theory of apocalypse to Dr. Conrad Zimsky (Stanley Tucci), a man of science who at first doesn't believe what he is seeing, but is too impressed by its depth and detail to simply give it the cold shoulder.

This theory, as it is explained to us in a crowded and dark room filled with military and government personnel, postulates that the electromagnetic field surrounding our planet, a plate of armor that allows life to live beneath it, is dying. Why? Josh concludes its because Earth's outer core, the source for the field's survival and endurance, has completely stopped spinning—just like that, without any possible reasoning or explanation to understand why that is a possibility. Nonetheless, his expertise in the field of geology, which the government itself utilized only a few days before, convinces his audience to takes him at his word on the theory, especially when he concludes his presentation by estimating that the planet can go only a few more months before violent solar winds penetrate the crippling field and turn Earth into a piece of charcoal.

How does one save a planet with this impending fate, however? By overriding all of science's limits, of course, and going down into the Earth's core itself to jump-start the still mass like the engine of a car. Some things, naturally, are easier said than done—the human beings who populate "The Core" know that the task they are involved in deals with something never attempted before, and there is a strong possibility that any of those who volunteer for the effort may never come back alive. A lot of details used in this thrust of the screenplay are basically just mumbo-jumbo for the core audience, but it's better than nothing. In fact, it's rather surprising that a movie of this vein is actually able to utilize genuine scientific fact as a subtext instead of mapping out survival strategies without the geologic insight. Had this been a film under the influence of a man like Jerry Bruckheimer or Roland Emmerich, the screenplay might have even insisted that the world was still flat.

At heart, though, "The Core" is a chronicle of team efforts, sacrifices, betrayals and last-minute decisions. In addition to key players like Dr. Keyes and Zimsky, the mission is also supplied with the likes of Dr. Ed Brazzelton (Delroy Lindo) and Major Rebecca Childs (Hilary Swank), people who offer other types of skills for completing the mission besides knowing about how deep Earth's layers go or what their density is. Their sense of teamwork survives the story's generally dry approach to this journey, although just barely—with Ed discussing formulas and mineral consistencies and Rebecca navigating the ship as if she were still part of a space shuttle crew, they all have wisdom individually and chemistry as a group despite being tossed into a generally dumb predicament.

But just what exactly is there to do when you're sent inside the Earth, anyway? Dodge large diamonds and hope that bombs are set off at the right time and place? This is a plot for a video game, not a disaster movie. The visuals here are also mundane and spotty, because no one really knows what Earth's interior even looks like, and if they did, chances are they wouldn't be very exciting anyway. The strongest point to all this is the surface disasters, which are ambitious and breathtaking visual sights but exist too sporadically to carry the dead weight of an entire movie. "The Core" might have been much more entertaining if it were simply about Earth being mercilessly destroyed by the decaying electromagnetic field, but of course filmmakers are too scared off by the idea of humanity losing to nature, so what was the point of even hoping for it?

The director is Jon Amiel, a man who has tiptoed on this edge of absurdity for most of his career (consider his last two films, "Entrapment" and "The Man Who Knew Too Little," if you will). Here, he manages to throw together a generally watchable but somewhat disjointed effort that always knows where it is going, even if the destination itself lacks all the luster of a true disaster epic. This is not one of the great natural catastrophe films of the recent past—it ranks nowhere near the level of "Dante's Peak" or even "Deep Impact"—but for what it's worth, it's a respectable distraction. Catching a matinee on a free Saturday morning is much more preferable than paying full admission, though.