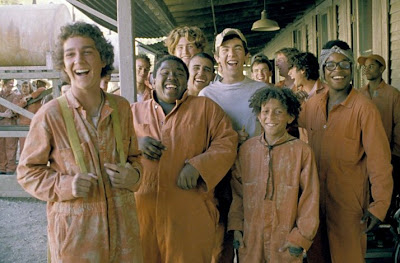 He who said you should not judge a piece of work based on its title sure said a mouthful. Andrew Davis' "Holes" is a movie that comes scurrying off the screen with one of the single most childish and unpleasant names in recent memory, outdoing even the horrendous stupidity of such endeavors as "Piglet's Big Movie" and "Bulletproof Monk" without even seeming to try as hard. The knee-jerk reaction to hearing it is to assume the worst of the product itself, and yet as the movie is being absorbed, suddenly we're forgetting all about our initial reservations and actually enjoying ourselves. Disney has not generally been a studio to leave pleasant surprises for audiences in the form of live action book adaptations (think for a moment about that horrendous "Tuck Everlasting' debacle last fall), but here they have broken the mold with what is perhaps one of the most interesting and amusing family adventures of the recent past. Holes may dominate the events of the plot, but the final product is far from being one itself.

The story revolves around Stanley Yelnats (Shia LaBeouf), the fourth son of a legacy of men with an incessant streak of bad luck to their name. His father and grandfather, who have a failing business venture that involves finding a cure for foot odor, are two talkative thinkers who relish Stanley with stories of their family's doomed heritage, and such luck finds itself repeated in the modern day when the young and bright-eyed wanderer is accused of stealing a pair of sneakers from a local homeless shelter and is sent off by the courts to Camp Green Lake, an establishment for young cons that, contrary to the clues of its name, lies out in the middle of a hot and dry desert.

There, young Stanley finds himself amongst a slew of colorful and interesting characters, such as Zero (Khleo Thomas), a quiet but determined kid who doesn't speak to any other members of his cabin except for Stanley himself. The adults, meanwhile, contrast the rugged innocence demonstrated by the film's younger players, particularly with Mr. Sir (Jon Voight), the semi-firm head of the camp who squints his beady eyes when he suspects the kids of being up to nuttin' good, and Mr. Pendanski (Tim Blake Nelson), the camp counselor who tries to be everyone's friend even when they don't want one. Screen legend Sigourney Weaver also makes significant appearance here, playing the camp Warden Ms. Walker, who only comes out of her air-conditioned cabin if her little workers find something "special" during their daily activities.

The activities in question, however, basically revolve around one specific (and rigorous) duty—digging five-foot-deep holes in the middle or an arid stretch of desert land, supposedly once home to a lake that has since dried up. The digging, Mr. Sir explains, "helps build character," but an ulterior motive lingers in the concept: though their tired hands shovel out pile after pile of dry dirt as the hot sun beats down on their flesh without so much as a hint of resistance, they are also warned to be on the lookout for artifacts that may hold the warden's interest, even though nothing so far has ever been found there. When something is surprisingly unearthed, though, Ms. Walker rushes right out into the area and rewards her boys with fresh water and "steaks for dinner," assuming that they are quickly approaching some grand discovery beneath the surface of the soil. Of course, no one knows what that discovery might be, but the initial possibility of a treasure being hidden in the desert sets off a series of flashback sequences which help unravel the mystery behind certain motives. They also reveal several eerie connections between the lake, the warden, Zero and Stanley's family curse, all of which seem brought together by fate for one final chance at breaking a centuries-old cycle.

The script is a two (and sometimes three)-tiered narrative structure, with seemingly unrelated subplots from the past gradually assembling in order to establish the background behind the present-day events surrounding Stanley and Zero. The movie is not overly preoccupied with this often perplexing form of storytelling, though—above all else, this is a buddy movie, and a pleasant, admirable and charming one at that which refuses to be conventional on most occasions. Particular background players—such as the obnoxious Armpit—are simply there to supply the story with an innocent comical outlet, but there are also effective characterizations not directly related to the core story, too, like Kissin' Kate Barlow (Patricia Arquette), the subject of one set of flashbacks that is a legend in present times for her streak of crime trademarked by the touch of her dangerous lips.

As one unfamiliar with the source material—as I usually am with these kinds of movies—I can attest to the fact that there is nothing more frustrating than having to be an expert on this story in order to completely understand the screen translation. There are several moments in "Holes," alas, which do nothing to sway this argument, particularly during the first half hour when detail after detail is being thrown at us without a chance to organize a clear perspective. But once the movie irons out these problems with the back story, it's pretty much smooth sailing from there. This isn't a great movie by any stretch, but unlike so many films to be churned out of the mouse house in these recent times, it's pleasant, inspired, sweet and generally entertaining. No one can argue it has a few bumps here and there, but in this wacky-titled little experience, holes are actually the farthest thing from our minds.