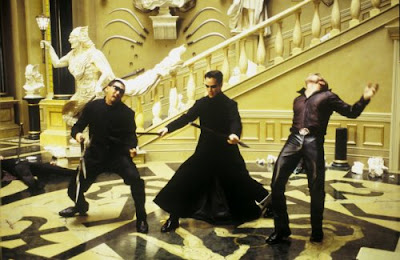 There is a certain fondness to be felt during trips to the local multiplex lately, especially when passing through those front lobbies where studios tend to tease their upcoming releases like fishermen showing off fancy new lures. In the far corner of this shameless promotional gallery is a poster for "The Matrix Reloaded," one of two sequels arriving in theaters this year to a now-infamous sci-fi masterpiece, with an enigmatic tag-line that reads at the bottom, almost frivolously, "How far down does the rabbit hole go?" Ah, but if the answer was obvious, would that still have warranted anyone from devising follow-ups to this now-legendary sci-fi adventure? Surely not. Here is a world with so much left unanswered, so many things left unexplored, it has never really escaped our consciousness. It is all around us. It has pulled you into its web of complexity almost without even trying. This Matrix hasn't merely recaptured you—it has never left you.

A four-year gap separates the release of "The Matrix Reloaded" from its predecessor—significant enough to caution those who might be going into darkened theaters with short-term memory loss—and yet the initial experience of seeing the first feature remains fresh in the mind, as if it were only absorbed mere moments ago. The original endeavor was not simply one of the most exciting action pictures of its time, but also one of the most revolutionary and thought-provoking, with a premise that exercised brain cells, a plot that never ceased to throw out surprises, characters that leaped off the celluloid, and visuals that were so unique, so alive and so elaborate, they practically pulsated. It was best described by one colleague as a "giant philosophy test in summer blockbuster clothing," exciting both the eyes and the mind with its dazzling foray of groundbreaking special effects and relevant social commentary. "What is reality?", the movie asked with certain irony at one specific interval. Though the question never came with an easy answer, it nevertheless fueled the vivid and investigative natures of the movie's viewers, who have spent endless amounts of time between then and now trying to crack the Matrix's code and understand its pertinence on pop culture, free will and the essence of the human psyche. A new book titled "The Matrix and Philosophy," in fact, is no doubt something people will continue to go to bed with night after night for years to come.

Since then, such ideas, both visually and narratively, have been worked into the fabric of countless other endeavors across the cinematic canvas, from the pseudo-realistic narrative clunkiness of "The Thirteenth Floor" to even the high-profile adrenaline of "Crouching Tiger, Hidden Dragon." Many have tried to equal the concept's audacious brilliance, but few, if any, have captured the essence that was initially forged by the Wachowski brothers, two men who look at things from behind a camera lens not like directors, but like puppeteers to the most boundless imagination. This sequel only anchors the notion that they have two of the most impenetrable minds in the business today, and the result is not only an impressive one, but a thrilling, thunderous and unforgettable one as well.

The movie begins with a touch of familiarity. After an opening dream sequence that exists simply to show off the digital improvements that have been made since the original feature, we're hurled back into the busy lives of our heroes: the smart and sassy Trinity (Carrie-Anne Moss), the philosophical Morpheus (Laurence Fishburne), and the swift but conflicted Neo (Keanu Reeves). They occupy the frame, however, as if considerable growth has taken place offscreen; they appear more cautious, more involved, and more concerned with the impending fate of humanity instead of just seeming to live for their own benefit.

They plug into the Matrix to meet with Niobe (Jada Pinkett Smith), a fellow vigilante of the system who has called upon her peers to formulate a last-minute plan against the machines, which under desperation for an increasing loss of human enslavement have decided to invade the last surviving human city on Earth—the core-bound Zion—and kill all its inhabitants in just 36 hours. Upon hearing this news, the ships outside of Zion's borders are instructed to return to the city by the cynical Commander Lock (Harry Lennix), Niobe's beau and Morpheus' apparent rival. The commander is a man of reason, but his counterpart trusts intuition more than apparent fact, and when he suggests that a ship be left outside of Zion in case the Oracle (Gloria Foster) attempts to initiate contact, Lock turns his nose up at the thought of "putting trust in a Messiah" (hey, if you were in a world where even human beings were facing extinction, wouldn't you feel the same way?).
The Oracle does make contact, however, and Neo, at once an inquisitor and now a godlike figure among his society, is sent back into the Matrix to collect any valuable information she has to offer. A lot is said regarding "making choices and coming to understand them"—though it doesn't affect the movie's performance, some of the dialogue here does tend to hover on the line separating plausible philosophy from inane doublespeak—but the most significant observation she makes should have been apparent to even the most simplest minds right from the beginning.

As with any major computer system over significant periods of time, the Matrix is in a process of upgrade, churning out new programs to replace older ones in an attempt to create a more perfect infrastructure for controlling humans. Some older programs, however, have refused to be deleted from the system and now exist as rebels, moving from one location to the next in hopes of dodging any prolonged attempts to remove them from the database. The deadly and viscous Agent Smith (Hugo Weaving) is one such program, although since being defeated by Neo, he has now found a clever way to stay in the system by copying and replacing himself over newer programs.

A concern that has preceded "The Matrix Reloaded," though—and perhaps any follow-up to a successful first feature—is the worry of filmmakers simply recycling familiar material in order to stretch the financial benefits of a series. Here, thankfully, the Wachowski's have created a product with its own distinctive flair, sometimes leaping from the established groundwork so enthusiastically that it nearly hurls itself past the brilliance of its predecessor in the process. The thesis of the plot has even shifted focus—here, characters are no longer contemplating what reality is, they are wondering how they can keep what they think is reality from being taken away from them. The cast has also expanded to offer focus on more minor players in addition to those already familiar—not only do we get interesting protagonists like Link (Harold Perrineau) in the foreground, but also creepy new enemies like "the Brothers" (Adrien and Niel Rayment), a set of albino-like beings with dreadlocks who can make their physical bodies disappear whenever danger threatens them.

When it comes to visuals, "The Matrix Reloaded" doesn't disappoint; in fact, the movie is probably the most realistic looking special effects feature ever made. Consider a scene when Neo fights Agent Smith after he has undergone significant multiplying; the sequence not only cleverly exercises the use of computer effects, it blends hundreds of duplicate characters seamlessly into the intricate kung-fu sequence without seeming obvious or artificial in the least (the Wachowski's signature bullet-time animation technique, seemingly more dimensional than before, is also utilized here when a plethora of agents is hurdled up into the air). The movie's final bout with the digital age, meanwhile, is a rousing 14-minute freeway chase complete with explosions, shoot-outs, choreographed fights atop big rigs and brave defiance of gravity, all leading up to a crucial plot twist in which Neo is taken into the Matrix's main frame to both understand his destiny as "the one" and uncover the hidden truth behind the system's frightening evolution.

The city of Zion itself, only mentioned in brief dialogue exchanges during the first film, appears here like a scene ripped from "Mad Max Beyond Thunderdome," dominated by complex industrial gadgets that seem to begin and end from one end of the circular city to the next like beams of support trying hard to protect civilians from outside danger. Its interiors, meanwhile, are even rougher; dark caves lit only by torches dominate the lowest levels of the establishment, and when Morpheus climbs a ledge to address a cavern full of avid supporters and warn them about the impending threat of the machines, their roaring cheers bounce from one end of the chasm to the next as if the echoes have no place to escape. The human society exists here not a thriving one, but a struggling one mercilessly backed into a dark corner.

At the close of the picture, a shocking jolt is slid under the rug just before a card pops up on screen saying "To Be Concluded," reminding us that there is still one more chapter to go before all the questions about the Matrix can be fully answered. And so shall these eyes wait in great anticipation for that conclusion, wondering if it is even possible for a series as ambitious as this to evolve even further from what has already been seen. To say that "The Matrix Reloaded" is a good follow-up doesn't do it complete justice. The movie is as great as its predecessor. It is utter magic. It throbs in awe of itself. It is what going to the movies has been about ever since there was a moving camera.

Sci-Fi/Action (US); Rated R for sci-fi violence and some sexuality; Running Time - 138 Minutes