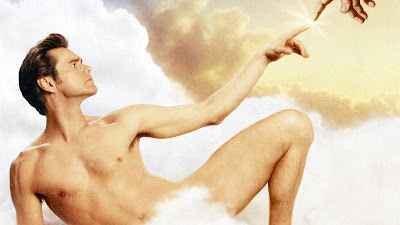 The movie takes place in Buffalo, a city where there's a story in every face on the street and a snide comment always waiting to be blurted out. Carrey plays Bruce Nolan, a local TV reporter highly regarded for his unconventional talent in making rather dry news stories seem interesting. It's sort of a choke-hold career thrust, alas, because his bosses reserve the stories with more potential (and relevance) for coworker Evan Baxter (Steven Carell), a conceited man who is gunning for the news anchor job that Bruce himself has been waiting on for years. When his rival is officially handed the position while he is out on location, however, things get ugly on camera and Bruce gives the department the kiss-off. This isn't shocking news to his girlfriend Grace (Jennifer Aniston), but the major pity party that he throws for himself is hardly something she's going to tolerate, and when he storms out after she blows up at him, he begins a long and self-indulgent rant about God never being there for him.

God, surprisingly, answers Bruce, at first with repeated paging and then later by meeting him at an abandoned factory in downtown Buffalo. God, it turns out, looks eerily like Morgan Freeman, too, and he's fed up with his acquaintance's incessant complaints about him never doing anything right for the world. "You think you can do better?", the lord asks with a certain amusement. Mr. Nolan insists he couldn't do any worse, and before he knows it, he is given all of God's power and is able to make anything he wants happen by the mere movement of his hand—sort of like an X-Men hero, if you will.

This isn't one of those comedies where we can just revel in the way Bruce foolishly uses those powers, however (although the first hour is an interesting, and sometimes funny, excursion into that territory). Before too long, our hero realizes that with great responsibility comes with this newfound authority, so to speak, one such duty being answering prayers from the billions of people on Earth who have considerably less of a decent life than he does. Unfortunately, when he ignores specifics and simply grants everyone's wish to free up time for himself, he single-handedly creates utter chaos amongst the citizens of the city (riots, for instance, break out because the local lottery is bombarded with thousands of repeat winners). The message to this all, I guess, is that no one should ever take what they have for granted, even if what they have is very little, but the majority of that notion gets lost behind elements of utter dementia, such as a cheesy and melodramatic subplot in which Bruce loses the love of his life and tries pathetically to reclaim her love, even though the one true Lord has repeatedly instructed him that the one thing God's power can never change is free will.

The script by Steve Koren, Mark O'Keefe and Steve Oedekerk is a fairly lackluster effort, saddled by a chunk of infuriating sentiment that completely undermines the last act, and a few jokes that are almost carbon-copied from every Carrey comedy that has preceded it. A scene with a monkey emerging from a man's rectum is, I'll admit, actually funny here, but ones involving Bruce's dog sitting on a toilet reading a newspaper, or ones in which the hero uses his power to create wildly sensational stories for the news (like the finding of Jimmy Hoffa's body), are not. In fact, they're rather amateurish in comparison to the work of "Liar Liar" or even "Me, Myself & Irene," which didn't have sophisticated humor but at least knew how to garner a chuckle now and then without trying too hard.

This isn't a bad movie, but nor is it a good one, and perhaps that specific prospect is what makes this effort so much more saddening. After all, no matter where any of us have fallen on the Jim Carrey spectrum in the past, one thing was always certain—we as viewers were going to have some kind of enthusiastic reaction to the material. In ways, when it comes to comic timing, Carrey at least still has a leg up on counterparts like, say, Adam Sandler and Rob Schneider, but for the first time since the beginning of his ambitious movie career, he seems to have settled into mediocrity here with a particular naive satisfaction, as if there is no point in trying anymore. "Bruce Almighty" is a walking mid-life crisis bankrupt of knowledge and energy, and the sad part is that no one involved even seems to realize it.