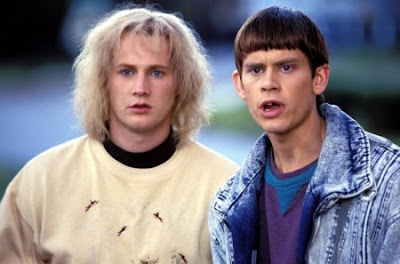 Contrary to the suggestive nature of its title, "Dumb and Dumberer: When Harry Met Lloyd" doesn't actually contain any of the original cast members from the first film. Gone, most importantly, are the faces of those who really matter: Jim Carrey and Jeff Daniels, two actors who at least approached the admittedly-dopey material of the first feature from as tolerable a direction as possible, and who also managed to share some kind of chemistry in the process. In their places, playing the juvenile versions of the same characters, are new faces Eric Christian Olsen and Derek Richardson, men who occupy the screen like mere synthetic clones of their superiors rather than actual individuals.

The plot revolves around the first adventures of both Harry and Lloyd during their high school years, where they meet for the first time and get caught up, quite accidentally, in a scheme involving the school's principal (Eugene Levy) and his mistress, the lunch lady Ms. Heller (Cheri Oteri), formulating a plot to steal thousands of dollars from the government by pretending they are investing it in a nonexistent "special needs" class for the school. Of course, to pass off their little gimmick as authentic in the eyes of everyone else, they organize a halfhearted class for those kids in need of "special" attention, the first two members of which just so happen to be our two little idiot heroes.

Like it's predecessor, "Dumb And Dumberer" shows absolutely no interest for plot or character whatsoever; it simply wants to formulate a series of sequences in which people say dumb things, do dumb things, act in dumb ways or unintentionally make others seem just as dumb as they are. The big difference, however, is that the original movie at least warranted a laugh or chuckle every now and then. This latest vehicle, cranked out as if it were a pile of rejected standup jokes in an abandoned script warehouse, is completely devoid of inspiration and humor. It lacks even simple energy, plodding along as such a reckless pace that it almost forgets to include a climax or resolution (and considering that the movie is only 85 minutes in length, that's an accomplishment in itself).

The director, Troy Miller, is also credited with being the man behind the disaster that is "Jack Frost," a factor that instantly provides clues to this movie's first misfortune. His intentions here are obvious—capitalize on the established value of the premise—but his methods wreak of utter amateurism, as they lack reason, purpose, and even ambition. When it comes to doing follow-ups to successful comedies to begin with, the idea of a prequel suggests bad omens; after all, what can be said about a project that chooses to look backward instead of forward for new material?

Comedy (US); Rated PG-13 for crude and sex-related humor, and for language; Running Time - 85 Minutes