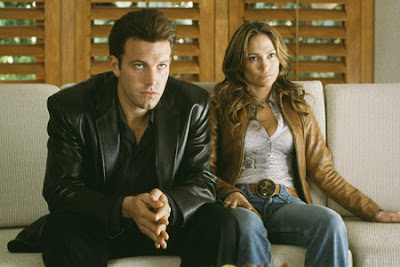 Alas, you can't keep an ambitious man down long even when you want to, and so arrives "Gigli," the latest—and probably the most appalling—in his collection of elaborate and highly-imagined clunkers. Starring real-life lovers Jennifer Lopez and Ben Affleck as hit men for the mob, this bloated, shapeless and inept pile of dreck is every viewer's worst nightmare: a product that not only bores to tears, but insults and angers on many levels in the process. It is about two opposite characters—one, a hotshot and arrogant hit man named Larry Gigli (pronounced "jeely"), and the other, an attractive but impatient hit woman named Ricky who keeps Gigli at bay with her admission of homosexuality—and how they can get on each other's nerves long enough before they finally realize that they have a mutual attraction to one another. It's also a movie about kidnapping the mentally retarded, following orders from half-witted mob bosses, and involving each other in a series of games and scenarios that are either offensive, obnoxious or idiotic in one way or another, too. The fact that it took so much creative talent to be this horrible on screen is an insult in itself, but that's beside the point. This is the kind of movie so badly realized and constructed that it's a wonder anyone involved could have thought something could be salvageable in the end.

As the movie opens, Gigli (Ben Affleck) is being barked at by his superior, Louis (Lenny Venito), concerning a new job that needs immediate attention. It seems an off-screen federal prosecutor is getting ready to launch a major legal assault on one of the crime world's biggest figures, and in order to prevent it from escalating, the bad guys need collateral against their legal enemy. The solution: kidnap the prosecutor's only brother, an innocent and mentally retarded kid named Brian (Justin Bartha), and hold him until the prosecutor caves in under the pressure of a family member possibly being hurt. But can Gigli, a guy who isn't exactly the most trustworthy hit man in the business, handle such a job? Of course not, which is exactly why Louis hires Ricky (Jennifer Lopez) to assist in keeping the kid under wraps. Needless to say, Gigli isn't exactly gung-ho about sharing the job with a woman, especially when it's a woman he knows he can't have in the sack.

Advanced buzz—at least aside from that which would convince you the film is indeed one of the worst of the year—has created the impression that Brest's endeavor is a romance comedy about two opposites who fall for each other on assignment, but that actually couldn't be farther from the truth. As conventional as the whole "romance comedy" scenario is, however, it probably would have been more preferable than trying to sit through the current state "Gigli" is in. The movie has no real focus whatsoever—its motivation is scattered between at least five and six different planes of reasoning, some of which don't do squat for the picture other than extend its already-overlong running time (such as a pointless plot twist in which Christopher Walken, as an FBI agent, pops in to question Gigli and Ricky about the disappearance of the retarded kid, leaves with a suspicious grin, and is never seen or heard from again).

Aside from the inevitable situations that build the two leads into their pocket of blunt sexual innuendo, the movie also implores the use of the retarded kid, Brian, in an utterly shameless manner, supplying him with vocabulary so vulgar and obscene it feels like we're watching Howard Stern's version of "Rain Man" unfold.For the sake of following the movie's logic, let's assume that people like this do, in fact, cuss like sailors—if you were a federal prosecutor and your brother was retarded, would you allow him to grow up in an environment that allows this kind of verbal behavior? Would you let him live somewhere where his only source of entertainment value is watching "Baywatch?" Better yet, would you let him live in a place where any stranger could walk in off the street and take him out of it? If so, then pardon me while I go watch hell freeze over.

We won't even begin to contemplate how Brest managed to convince anyone to fund a project with his name on it; at this point, that would simply be more work than it's worth. What we should contemplate instead, more so than the movie's intricate series of errors, is why people as talented as Lopez and Affleck would even bother being associated with something so ill-fated to begin with. Working relationships for famous couples have a tendency of resulting in less-than-stellar results (just ask Madonna and her husbands); that alone should have been reason enough to forget about possible collaborations, apart from the whole Brest debacle. Do they at least have chemistry in "Gigli?" Not really, but it certainly isn't because they don't try. The script doesn't even supply them with the motivation to build that synergy; it throws them into opposite corners (her as a mature and soft-spoken lesbian and him as a macho and obnoxious mob enforcer with the morals of a maggot), so by the time the story calls for a spark, it doesn't acts like a virgin that doesn't know where to begin. They lack even smallest hint of admiration and have no real conversations with one another, other than a repeating one in which Gigli stares off in a daze while Ricki talks about all the reasons she prefers women over men (one of the most baffling reasons: "the male penis is like a big toe"). This is halfhearted movie foreplay in the guise of romance.

"Gigli" certainly isn't the worst film of the year, as it has been made out to be by other members of the press (no, that honor still belongs to "Boat Trip"), but it does make one wonder if the lynch mob mentality against certain cinematic endeavors isn't at least a little deserved. Only halfway into the mess, I understood exactly why so many in such a short amount of time could display so much hatred for one single movie. It's one thing for a film of this magnitude to be merely unlikable; it is something else entirely for it to be smug, careless, offensive and incompetent as well. Consider those sentiments the next time you get the urge to peer back into Martin Brest's vault of cinematic travesties; at least most of those films had some kind of ambition other than trying to inflame viewers with anger.