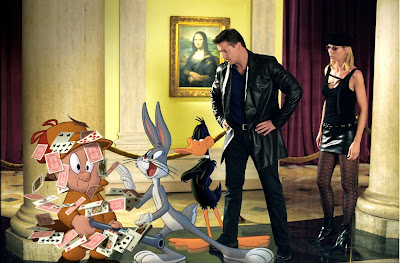 Alas, there are concepts at work here that greatly override the affection we might experience with the cartoon cast. Part of the endurance of the Looney Tunes in the past has primarily depended on the prospect of only having to see them in innocent five-minute cartoon shorts over the years, but with "Looney Tunes: Back in Action," the audience is required to tolerate them (and the gimmick, for that matter) for 90 long minutes, a prospect that is not plausible because it exhausts their significance. Furthermore, there is a reason why movies featuring live-action characters that mix and mingle with animated counterparts are virtually extinct; the idea is labored and dumb beyond hope, and for the life of me I can't see why any filmmaker would choose to go this route instead of simply imploring one or the other.

The harebrained plot (no pun intended) revolves around Bobby Delmont, a Warner Bros. security guard/wannabe stunt man whose father, famous movie spy (and apparently real-life one) Damien Drake (Timothy Dalton) has been captured by enemies who are in search of the mysterious Blue Diamond. Bobby, out of instinct, rushes off to Las Vegas to hunt for his dad and said artifact, but the real problem?—Daffy Duck, the latest unemployed resident of the shrinking Looney Tunes family, is tagging along for the ride (how the two characters are connected in the first place, I will not reveal—such a device is simply not important in this kind of movie).

Meanwhile, Bugs Bunny, Daffy's primary costar, is torturing the studio's creative consultant Kate (Jenna Elfman), the woman responsible for the duck's firing and the subsequent destruction of the ever-popular Daffy-Bugs duo that the cartoon division has depended on for a good portion of the Looney Tunes legacy. At the beckoning of the carrot-munching rabbit, eventually the two decide to go off hunting for the duck. But will Daffy be that willing to return to his former job considering the latest adventure he is involved in? After all, this is a guy who has played second-fiddle to the egotist rabbit for years in the past; now he has the opportunity to be the star hero, not the baggage comedy relief.

The title of the film wrongfully suggests that the Looney Tunes themselves have been lying dormant for some time (how can you be out of action if you're immortalized in shorts that continue to have successful runs on television?), but that's only the minor detail here. Even though it tries to create the impression that there is anything resembling "action" taking place on celluloid, the movie is rather bland and unadventurous most of the time. That's because far too much importance is placed on the live action characters, who in contrast with the likes of Bugs, Daffy, Elmer Fudd and Yosemite Sam look like they should be spectators at a who's-who reunion of animated superstars. To top it all off, the movie doesn't even allow the more sinister "tunes" to occupy the role as villain, either; no, they instead give that honor up to Steve Martin, who plays an Acme chairman with such unsettling stupidity and amateurism, it comes off as the most annoying role the actor has ever been involved in.

The movie has some good moments (I loved the elongated chase sequence in which Elmer Fudd and his counterparts Bugs and Daffy hop from one famous painting to another in an art museum), but they're far in between here because the movie wants to depend on more mediocre elements. Looking back at the hour-and-a-half experience, I realize that watching the Looney Tunes for such an extended period of time wouldn't necessarily be a bad thing, had it been just the Looney Tunes involved. After all, poor Daffy Duck has been trying so hard to be the star of his vehicles for more than a half a century; a shame that he finally gets the chance here and is unfairly upstaged by the script's needs to force reality on us.