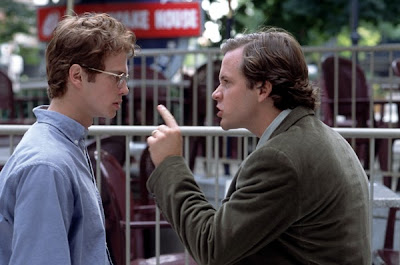 In "Shattered Glass," a loose movie adaptation about those events, we begin to understand just why it was so easy for Glass' colleagues to cave into the trap. This is a guy that is just plain hard to dislike; he comes off as shy, ambitious, flamboyant and professional all in the same breath, fluctuating between traits of confidence and insecurity so relentlessly that it creates the impression his personality is genuine (after all, who doesn't do the same?). In that essence, Stephen achieved everything he desired in the world of journalism. It was just that disastrous little discovery in the end that screwed everything up.

The discovery, according to the film, came with an article spotlighting a computer hacker's blackmail scheme against a major corporation. As Adam Penenberg (Steve Zahn) is told to go hunting for information on the article for a rebuttal piece he is doing for an online magazine, he begins discovering major errors with the work. Jukt Micronics, the business in question, doesn't even exist. Sources turn up missing (some leave brief e-mails or messages saying that they don't want to talk on the subject anymore). Soon it becomes a game between Stephen and his growing board of opponents as to who can stay ahead of the game without tripping up. Can the ever-resourceful Glass manage to pull a fast one and keep his story looking authentic? Or will the naysayers persevere in their attempt to discredit the ever-so-popular publication?

Glass is played here by Hayden Christensen, a guy who has the kind of pretty-boy innocence necessary for such a role. He shows up almost completely on-key with the persona; in fact, when the script requires Glass to react in specific ways, Christensen actually takes the drama up a notch with little behavior quirks that would otherwise be ignored by most other actors. The more tense moments come not when the character is fighting outside sources, but rather when he's trying to defend himself to his boss Chuck (Peter Sarsgaard), a new employee of the publication who hasn't quite fallen for the elaborate act enough for him to be blinded from what is obvious.

The movie is perhaps more well written than most would give it credit for. Light on story but heavy on details, "Shattered Glass" uses specific events and dialogue exchanges as the primary driving forces behind the plot, not the standard fits of tension or excitement you would ordinarily expect out of such a premise. That may hurt the film's sense of dynamics to a certain degree (the movie would work better on DVD, as it lacks the theatrical aura that would warrant showings on the big screen), but it certainly doesn't take away from the fact that the script, written by director Billy Ray, is concise and taut without being skimpy on necessary traits. Ultimately, however, the movie comes down to the deteriorating relationship between the two men more than anything else, as the popular kid faces bad reputation and the disliked newbie is about to experience an upgrade in approval. The twists are there, but they eventually become side details, and both Christensen and Sarsgaard help deliver the goods in the end.