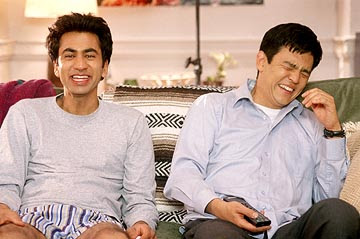 "Harold and Kumar Go to White Castle" is about two guys who get high on dope and decide to go to an out-of-town burger joint, only to have a series of misadventures with colorful characters along the way. There, that takes care of the plot synopsis part of this review.

I deliberately abandon the urge here to stretch narrative discussion regarding the latest Danny Leiner vehicle, because to do otherwise would be to apply more effort than what either the writers or the director employ in devising this simplistic off-the-wall vehicle. Much like "Dude, Where's My Car?", Leiner's first major outing as a filmmaker, this is the kind of endeavor that doesn't need anyone or anything to explain the fine print; all you are required to do is walk into the theater, watch 84 minutes of footage, and then exit without the slightest urge to recall anything that you just saw.

These "live for the moment"-style comedies have always appealed to our guilty pleasures because they have such an energetic propensity for pulling you into the brainless fun. "White Chicks," the most recent Wayans brothers product, was exactly that kind of film - you came, you saw, you laughed your ass off, and then you completely forgot about it afterwards. And that was okay, too. "Harold and Kumar" inhabits several of those ideals, aiming only to please those who are escapists, who are in the room just for a temporary distraction. Unfortunately, they don't get enough of a diversion to make the result very interesting even as a mild piece of amusement. It has jokes, it has intellectual characters and it has situations that boggle you into fierce chuckles - but like an overzealous freshman comedian, the movie has delivery that often overshadows the punch lines, and it's not very accessible.

The two main characters are well-imagined enough to deserve something better. There's Harold (John Cho), a hard-working Asian American who gets work dumped on him by flaky co-workers at an office job, and then there's Kumar (Kal Penn), an Indian American who applies to medical schools at the demands of his father but always fails the interviews because he'd rather spend his time getting high. Together, both men live in an apartment where they unwind at the end of the day by inhaling as much pot as they possibly can. On this particular occasion, however, both Harold and Kumar are not only doped up, but hungry. This inspires them to take a trip out of town to a burger joint named White Castle, which, as television spots indicate, gives you six burgers, fries and drinks all for just $2.99. But the trip isn't an easy one, alas - along the way, both find themselves in predicaments, sticky situations and embarrassing scenarios that stand in their way of getting from point A to point B. Ultimately, will they finally be able to get to White Castle and satisfy their drug-induced hunger? If you care, you're probably more gullible than either of the two leads.

The appeal in all of this is that Jon Hurwitz and Hayden Schlossberg's characters aren't the typical morons who get doped up just for the sake of acting like idiots; though the story provides them with plenty of situations that aide the cause, they bring a certain intellect to the table that is kind of refreshing. So, too, does the friendship itself have an evolved presence rather than seeming like the kind that exists only because of the drugs; both Harold and Kumar irk, frustrate, anger and even insult one another on countless occasions… but in the end, they have an underlying understanding of each other's faults and don't insist on being overly critical when one of them screws up majorly.

Speaking of screwing up, both of these guys do plenty of it - in between attempts to get to their burger joint of choice, both Harold and Kumar get caught smoking dope on a school campus, almost hook up with two preppy college girls with bad diarrhea, get arrested for attempting to jaywalk, and even get their car stuck in a ditch (only to be later saved by a creepy tow-truck driver with boils all over his face). In truth, however, a lot of these predicaments sound funnier than they actually are; in fact, many of them are rather forced. I suppose the allure of the material is reserved for those who can identify with the film's situations - in other words, people who are just like the title characters - but why does it have to be that way? Who says that your typical middle-aged American can't possibly see the humor in a film about two young guys whose love of pot gives them impeccable comic timing? A great comedy can reach anyone if it tried hard enough, and the problem with "Harold and Kumar Go to White Castle" is that is sees no immediate urge to appeal to a broader audience. It barely has the enthusiasm to satisfy the target viewer as it is.

Still, the movie works exclusively for them in some capacity. It has laughs, it has flair, and it certainly has the kind of charm to it that can make even the biggest cynics smile once in a while. But unless you are part of the moviegoeing public that relates to any and all of the wacky and brainless situations that the director throws on screen, a majority of the material will leave you only half-amused. The six-burger special, in this case, is not worth the trip.