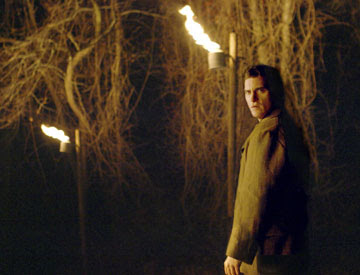 For what seems like generations in M. Night Shyamalan's "The Village," a peaceful establishment of villagers has lived in complete seclusion, fearful of the idea of venturing out of their own borders and into the forests where unknown beings lurk. Their worry of the outside is underscored early on as farmers and young children feast at tables on an open meadow, and a beastly cry in the wooded hills echoes across the landscape, sending chills up and down their spines like mice waiting for a ravenous cat to pounce. No one knows exactly who they are or what they look like, but the town's elders refers to them as "those whom we do not speak of," suggesting that the outside forces may range from barbaric humans to bloodthirsty monsters. We as audience members know even less than what the characters seem to, but we share in their sense of dread; a world in which the boundaries are determined by lit torches and guard towers, after all, doesn't suggest that the outside beings are that peaceful or civilized.

We have heard tales like this before, in storybooks and sitting around at campfires, all with one simple thread of reasoning driving them: to undermine your defenses long enough to scare the pants off of you. Like any good story, however, most of these colorful tales are just that - tales, fables, complete and utter works of fiction. But you don't question them, either, because it's fun when you have ordinary people dealing with monstrous villains. "The Village," on the other hand, has a conscious underlying knowledge that everything on screen is fiction, which means that any and all scare moments you might have are just false reactions to a shameless pretense. This isn't the skilled or even plausible thriller that Shyamalan or his enthusiastic actors would have you believe; the movie is a faux thriller, so filled with camouflage and manipulation that when the big twists are finally revealed, the entire film loses any true sense of value. To have hindsight is to defeat the purpose of even seeing the picture at all.


The film stars Joaquin Phoenix as Lucius Hunt, a shy but fearless villager who is in love with Ivy (Bryce Dallas Howard), the blind daughter of town elder Edward Walker (William Hurt). He is, admittedly, too introverted to publicly acknowledge his true feelings for Ms. Walker; luckily for him, however, Ivy is not nearly as timid, and despite her inability to see him she pursues like a bull with a red flag being waved in front of its face. That the two of them have known each other since they were children only anchors their bond, and when she speaks to him he listens like she's only thing in the world that matters.

The dilemma in all this is that Lucius, recognizing the reclusive attitude of his fellow villagers, has volunteered himself to go outside the borders and into neighboring towns for new medicines needed to combat serious illnesses (the movie stresses this point when the elder August Nicholson lays his own son to rest at the beginning of the movie, probably for an ailment that could have easily been managed with outside care). The elders, on the other hand, reject the plea, sticking to the traditional rhetoric that anyone venturing into the woods becomes the target of a race of ruthless forest-dwelling beasts and potentially puts the entire village populace in mortal danger. Furthermore, townsfolk are also told that the beasts are drawn to the color red, making it forbidden within the village at all times, and all the more dangerous to potential wanderers since red flowers completely populate the lands just outside of their own.

Testing the warnings of the elders, Lucius goes into the woods anyway. But only just for a moment - and unfortunately for him, that one moment is noticed by someone in the shadows, which provokes a mild resistance in the beasts as they wander into the towns that night and terrorize its fearful citizens. The camera is careful not to reveal much of them during this night invasion, but it gives us enough - they are robed in red (hey, that's forbidden!), stand tall and growl like savage animals, and seem to be made up of boney skeletal systems. At this point in the movie, Shyamalan succeeds in building the necessary tension; he seems to truly evoke the idea that his characters are dealing with something beyond their control (and, quite possibly, our sphere of reality). Are they indeed the savage beasts the elders warn everyone of? What do they want? Why are they so challenged by anyone wandering into their territory? Rather than giving those questions an effective answer (or even leaving them open to interpretation), the director squanders the thrill by employing a series of big reveals that are not only damaging, but fatal to the material's effect.

The twists, admittedly, are not conventional. Shyamalan has always been a big fan of narrative disguise (consider the final twist of "The Sixth Sense," which gives all the material before it new perspective), but in the past when he has pulled away the narrative wool, he hasn't pulled the skin away with it, either (I have only liked one Shyamalan film thus far, but that's beside the point). When it comes to him playing the audience in "The Village," he overstretches his potential and causes the material to cave in on itself; the revelations are too challenging and too disconnected for them to work in any context with the substance before it. Seeing these revelations, furthermore, robs the film of any and all potential repeat value. Our very desire to see the endeavor in the first place is based on the promise of thrills, but knowing the outcome of it all removes any and all hope of you being scared or surprised.

If there is an unaffected bright spot in all of this, it's that newcomer Bryce Dallas Howard is good enough to rise above the shenanigans of the script and emerge without it undermining her usefulness. As the blind Ivy, a caring woman with faith in what is right (and confident that the love of her life will never leave her behind), she is damn-near brilliant in the way she faces danger without backing away from it. Even when the movie forces her to abandon the village and seek out external help following a tragedy concerning two villagers, she is driven not by fear but by confidence. Watching her wander around in a movie so filled with miscalculations, of course, saddens the effect (why can't we get a performance this good in a movie that deserves it?), but at least she isn't buried by it. This is an actress we will surely be seeing more of in the not-too-distant future.

Other crucial characterizations emerge without much going for them other than the actors in the roles. Consider, for example, the Noah character, played here by Adrien Brody in such a zealous manner that you almost wonder if the director is coaching him behind the camera ("Hey you, act all crazy and maybe no one will notice my plot sucks!"). Now Brody is a likeable guy, who remains fresh in the memory with his marvelous performance in Roman Polanski's "The Pianist," but when a screenplay devotes more time on a character's quirks instead of necessary exposition, you have to wonder what inspired him to take the role in the first place. Ditto to Sigourney Weaver, one of our great living actresses, who is reduced to a mere background player here before she has an opportunity to remind us of why she is so good in the first place. I gather many of these faces were acquired based simply on the notion that they would be starring in an M. Night Shyamalan movie. To them, a script was probably just a minor detail.

Shyamalan has always skated on thin ice as a director, but after his last feature, "Signs," opened in theaters two summers ago, it was as if a sophomore filmmaker had graduated to the senior class overnight (that film, too, had an implausible resolution, but it was detached enough so that the material before it still stood on its own). Such a perception only makes the mess that is "The Village" much harder to swallow. Is this a guy that expects to be regarded, in some context, as a modern-day Hitchcock in the way that he concentrates on tension? Perhaps. But Hitchcock did not resolve thrills with insult or blatant manipulation, either; he knew that suspense was only worth building as long as it drove you in the direction of a worthwhile payoff. Once Shyamalan recognizes that concept and quits trying so hard to invert things, maybe he can recover from this relapse. Until then, stick with "Signs" and forget that he directed anything else.

Thriller (US); 2004; Rated PG-13 for a scene of violence and frightening situations; Running Time:121 Minutes