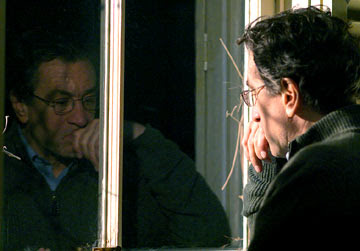 The one persistent trait that takes hold throughout this 100-minute vehicle: the evident amateurism on display behind the camera. Actor-turned-filmmaker John Polson, whose most recent theatrical outing was the much-maligned "Swimfan," is not one of those directors who thrives at driving suspense over extended periods of time. Rather than capitalize on the potential insecurity of an audience as a more successful filmmaker would do, Polson stacks his films with rapid impulses - that is, brief moments of shock that last for three or four seconds before the film deadens itself again and then immediately moves on to the next platform. Because it is easier for a moviegoer to build up resistance against a sparse rhythm rather than a constant one, though, this is an even bigger injustice to cinematic thrillers than being just ordinary or predictable. "Hide and Seek" is an example of Polson playing to that disadvantage, and audiences will no doubt find all of his pithy attempts at scares to be little more than points of annoyance, even apart from the whole auto-pilot approach of the plot.

The story opens somewhere in upstate New York, where David Callaway (Robert De Niro), a successful psychologist, is living with his wife and daughter. Unfortunately, the marital relationship isn't going all that well; husband and wife pass each other in halls and in the bathroom like virtual strangers, staying civil, we gather, just for the sake of keeping their daughter Emily (Dakota Fanning) happy. How long this charade has lasted is anyone's guess, but Alison (Amy Irving) has apparently reached the breaking point of it all towards the opening of the picture. After daughter and husband are in bed, she quietly slips into the bathtub and commits suicide.

The family members are, naturally, scarred by the incident. None perhaps as much as little Emily herself, who spends large amounts of time doing little but staring off into empty space with giant sober eyes. David's colleague Katherine (Famke Janssen) suggests keeping her around her familiar setting to help ease the pain and provoke recovery, but he opts for a different route: escaping the suburbs completely and moving into the countryside, where he purchases a big empty house so that just he and his grieving daughter can get away from it all. That David hopes his she comes out of her mental isolation is always his main goal, but even he is rather surprised when she starts to emerge from it rather quickly after the relocation. For the first time in months since her mother's suicide, Emily's face brightens up, and she begins laughing again. She also does a bit of wandering outside the house, a notion that one would suspect meant the little girl was meeting new friends to help her along with her pain. But father's inquiries into this new-found happiness reveal a potentially-bigger problem. Emily has not met a new friend per se, but rather has created an imaginary one in her head, and refers to him as "Charlie."

Fine and dandy? Hardly. Pretty soon, it is evident that this "Charlie" has a strong hold on Emily's life. She refuses to accept potential new friends, gets into trouble, and even speaks crossly towards her father around his new friend Elizabeth (Elizabeth Shue), whom he meets in the local town and invites to dinner on occasion. Consults between David and Katherine lead to all sorts of theories about Emily's latest mental state - one is that she merely takes great satisfaction in protecting the existence of a friend that everyone is so dismissive about, while another suggests she has splintered from reality because of the earlier trauma. In either case, though, something strange and mischievous begins happening under Mr. Callaway's roof, and when the family cat is drowned in the upstairs bathtub (not a location coincidence, mind you), he has to wonder whether his daughter is really capable of something so heinous… or if, indeed, "Charlie" is a little more real than anyone might have initially thought.

The difficulty with a premise of this nature is in finding the right balance of moods. In other words, when it comes to a plot that requires significant personal trauma as well as brooding tension, how do you even the scales? You don't - common knowledge requires you to choose one over the other, especially if they collectively create potential disconnect. Here, however, the filmmakers play up the totally wrong side of the emotional thrust. Emily's trauma isn't so much a driving force as much as it is a point of reference to get all sorts of momentary thrills and chills going, a prospect that, as the movie descends further into a nightmare of familiarity, becomes highly infuriating. As a full-fledged drama, the movie might have made more sense, but as a straight horror film it is a collection of missed opportunities and errors. The fact that both De Niro and Fanning play the material like straight family tear-jerker for most of the time certainly doesn't hurt this assessment, either.

But what of that ending, huh? One can practically imagine the blank stares and shaking heads of viewers left in disbelief here. It's one thing for the material leading up to the climax to be mind-numbingly routine; supply it with a conclusion that reeks of desperation, and you wonder just how little time it took for the writer to actually come up with it (in fact, if you wanted to split hairs, we could almost accuse her of watching a certain thriller from 2004 and duplicating the twist verbatim). The even sadder part is that the resolution doesn't make much sense narratively, either; aside from their being no genuine build-up to the reveal, there is also no tangible evidence in the prior material to support its weight. It is a red herring that is dissonant and on a level of reasoning completely separated from everything else. But of course, by that point, it isn't so much a new dilemma as it is a final nail in the coffin.

When you look at the recent resumes of De Niro and his co-stars, you have to wonder why any of them felt compelled to be involved in the production of this thing to begin with. Who does it benefit? What possible joy can one of them get here, other than being able to say that they added another notch to their creative belts? Famke Janssen has garnered an all-important "hip" vibe with her appearances in the "X-Men" films, while De Niro and Fanning have seen wise decisions populate their careers in the recent years (he most recently with "Meet the Fockers," she even more recently with appearing in Spielberg's upcoming remake of "The War of the Worlds"). If this was merely an exercise on their part to try something outside of their repertoire, then hopefully it is now out of their system. Good actors belong in good movies; they do not, under any circumstances, belong in "Hide and Seek."