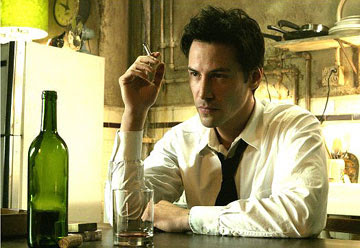 The material is based on a popular DC/Vertigo comic book called "Hellblazer," which centers on the adventures of a rogue wanderer named John Constantine. Carrying with him extensive knowledge of the occult, he scours the world of its most evil presences, slaying demons along the way and keeping the denizens of hell at bay as they strive to influence (and ultimately collect) the easily-corrupted souls of our own world. But the battle, we are told, is but a minor detail in an ongoing feud being waged between the forces of good and evil outside of our plane of existence; the gods have turned mankind into a giant tug-of-war, competing for souls as they pull the necessary strings to force individuals from one side to the other. They play by rules but not mercy, and as the competition proceeds, they conjure up different methods of influence to try and keep the game a little more challenging. In other words, they want to confuse their victims just as much as they want to baffle the audience.

Constantine himself is played here by Keanu Reeves, who, thanks to the "Matrix" films, has nailed down the underlying skill of emotional despondence required of certain comic book heroes. As the film opens, we see the character in the role of a rebel exorcist, called up by a local priest to rid an innocent girl of a fearsome demonic presence that inhabits her body. His methods are anything but routine, which is what makes him so reliable; he stares at his target with fearlessness and determination, and when he is at first unsuccessful in cleansing the evil from the girl's body, he simply revises the technique rather than dwell on the failure. Yet part of his motivation comes from not just wanting to do the right thing; as a Catholic, events in his past completely prevent him from crossing over to heaven after death, so joining his enemies in the afterlife is a prospect that sits heavily on him. The fact that he is diagnosed with a fatal lung cancer at the start of the picture certainly lends to the notion that he won't be so easily sent into hell without the obligatory kicking and screaming, either.

In the midst of all this ongoing groundwork is an actual plot, mind you. In it, John crosses paths with FBI agent Angela Dodson (Rachel Weisz), who is investigating the death of her twin sister Isabel. The conflict: she is not convinced that her sibling's demise was caused by suicide, as the authorities believe, although the evidence (including surveillance footage) clearly indicates that she leapt from a building of her own free will. Any normal guy would not likely support such an unfounded theory had they met the agent themselves on a whim, but Constantine's background makes him much more of a thinker than most, and it's his notoriety for mysterious dealings that open up his eyes to other possibilities. The eventual investigation, needless to say, reaffirms both his and her suspicions that something else was involved on the night she perished, and the more they dig the more they realize that her death, like so many others, may be related to an evolving presence of evil in the realm of mankind, which has seemingly sidestepped the rules of competition and plans to unleash Satan's own son on the world.

Now here's where the movie makes its first big mistake: it doesn't share any of its suspicions with the viewers. As most of the events unfold, in fact, the characters are more like secretive private investigators rather than engaging heroes; they absorb details, make decisions, arrive at sweeping realizations, but never actually share the findings with anyone until after the most opportune moment has already passed. Consider a plot point which suggests that hell needs a powerful psychic-like person in order to channel the necessary energy for the son of Satan to come into our sphere of existence - rather than utilize this as an element of build-up, the narrative instead chooses to reveal it long after the specific events are already in motion. Where's the tension in this? Where's the excitement? There is none. It is a missed opportunity of unforgivable proportions, plain and simple.

But of course, by that point, being given any general detail at least prevents us from totally tearing our hair out. Beforehand, the movie is supplied with little more than a bunch of vague suggestions and disconnected narrative pointers, painted in such broad strokes that potentially exciting context becomes little more than incessant hogwash. This is a disservice, mind you, that doesn't indulge in the kind of overkill you come to expect of the most familiar recent satanic thrillers; rather, it is a showcase of holding too much back, not being forward enough to garner full attention, and sidestepping the cause just for the sake of getting straight to the effect - in this case, watching Keanu Reeves fight demonic forces in great quantity in an effort to try and save the world (and himself) from the bowels of hell.

That the visual flair of the movie is totally captivating is certainly a cause to feel more cheated by the payoff. As director, Francis Lawrence gives the material a multi-faceted perspective that rivals some of the great work of this genre in recent memory. He captures the essence of the subject matter without mulling it down in the routine production values of your average blockbuster, and his visual representation of hell itself, which serves as the centerpiece of the movie's climax, is one of the most remarkably exciting ones I have seen: the kind that is gritty without being cheesy at the same time. He also manages to acquire a few respectable performances on celluloid, too - Rachel Weisz, in particular, plays her role with a balanced charisma, and I really admired Djimon Hounsou as Midnite, who is sort of an intermediate between the Earthly presences of heaven and hell who routinely pops up to assist Constantine in whatever dilemmas he encounters.

But these qualities are not so endearing that they manage to keep the material itself afloat, either. "Constantine" is more or less a showcase of new Hollywood blood playing his luck without having a full-fledged strategy in advance, and yet one that doesn't exactly seal off the doors of potential, either. There is no denying that Lawrence has the right drive and imagination to do something truly great in his career. Whether he is able to do that all depends on how he looks back at this endeavor: will it be a beginner's lesson, or a standard to follow? One would hope he opts for the former.