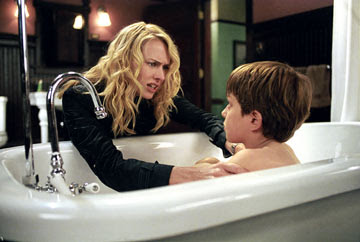 That is not acceptable in any regard, especially for director Hideo Nakata, who actually directed the original Japanese movie that inspired this one's predecessor. He and his writer Ehren Krueger play with the audience's expectations shamelessly and unsympathetically; at one moment we are reminded of the intuitive brilliance of the original Gore Verbinski picture, and at others are reminded (sometimes painfully) that ambiguity has its advantages, especially in cases when you feel like you are beating a dead horse. The first film in this franchise was nonsensical to a fault, yes, but it was nonsense with a certain level of craftsmanship. This half-hearted follow-up does nothing new other than to try and justify that absurdity, and watching it unfold is the equivalent of studying rigorously for a test that the instructor decides to call off at the last minute.

This is not to say that the idea of a second film in this franchise was entirely pointless, mind you. "The Ring" was the kind of endeavor that was both inspired and unique, and though audiences were initially divided by the story of a little girl and the curse surrounding her, the fact that it required a bit of mental thinking in order to make full sense was an inspiring notion. Such narrative mind games are fully deserving of new chapters, provided that they are indeed independent entities instead of just simple reenactments of prior material. "The Ring Two" lives up to none of that potential; it is a long, exhausting and pointless 111-minute exercise in red herrings, dead-end justifications and contrived horror situations. Those who were confused by its predecessor might at first find that scenario appealing, but if you have spent so much time and energy already on trying to figure out things already, it's doubtful that you want to see all of that squandered by a shoddy cinematic misstep like this.

The movie takes place, we gather, shortly after the events of the first film have transpired. Rachel Keller (Naomi Watts) and her son Aidan (David Dorfman), the apparent first survivors of a wave of terror generated by a cursed video tape, have left the big city and now reside in a small community by the ocean, where they hope they can start life with a clean slate. The movie, unfortunately, has other plans - in a nearby neighborhood, a teen guy tries desperately to get his girlfriend to watch said cursed video tape, only to fail and, thus, fall victim to its curse (which in this case is instant death at the hands of Samara, the little girl who is the focal point of the legendary three-minute footage). When Rachel discovers that the deadly curse is seemingly on the verge of re-entering her and her son's life, however, she tracks down said video and destroys it. Samara, being the pissed off little girl she is, doesn't appear to be very happy about that action, and as a result both mother and son once again move into the kid's crosshairs.

How Samara exacts her revenge on Rachel is a conflict that is, I guess, meant to drive the narrative from point A to point B, but it makes too many unnecessary detours in between to be considered very reliable. Consider, for example, a sequence in which her car is attacked by hordes of deer as she is passing through a wooded area. Never mind the fact that the creatures themselves are obvious victims of bad special effects; why bother with the sequence when it is basically a reworking of a similar one featured in the first film, especially when the current plot does not justify its inclusion? These are questions one has at nearly every interval from beginning to end. There is no forward motivation whatsoever in any of the twists; you basically sit there while the director assaults you with his creepy visual style, and the writer's ideas fly over your head like fragmented ideas from a really bad brainstorming session. The central conflict itself, meanwhile, is never fully realized - when Samara decides to channel her spirit into Rachel's son Aidan, and he becomes this dejected figure with a certain foreboding aura surrounding him (not the least of which is his ability to stay fully conscious even when his body temperature drops ten degrees), it lacks a certain level of determination and skill. We aren't convinced, we aren't interested, and more importantly we don't sense that anyone involved cares about leaving behind a lasting impression.

As a director, Nakata knows a lot about the visual thrill - if you take this into consideration along with "Ringu," you have in your grasp someone who is eager to attack the eyes with all sorts of interesting camerawork and flashy editing (I especially admired a scene in which Aidan is sitting in a bathtub while all of its water is rising to the ceiling in a reverse gravity effect). But his flair for the bizarre and offbeat imagery are basically just empty calories here, unsuccessful distractions from something greater, and they do not totally remove you from the notion that everything happening on screen is a direct retread of everything that was seen in the prior installment of this series. The only thing that distinguishes this film, perhaps, is a brief appearance by Sissy Spacek, who plays Samara's institution-bound psycho mother, and offers a few words of wisdom to Rachel when she pops in for an emergency visit: "You have to listen to the voices!" Her words have a certain ambiance and chill to them, but that's just because of who is saying them, not because of the reason they are being said in the first place.