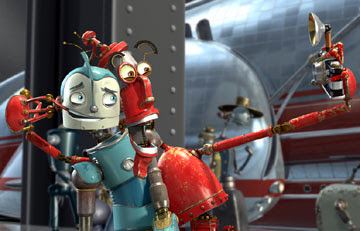 It would, nonetheless, be easy enough to squander this concept under the weight of conventional or misleading execution, but Fox's latest venture into a genre dominated by Pixar and Dreamworks is poised to throw a legitimate punch on the creative scale. More than being just plain imaginative or brilliant conceptually, "Robots" is a multi-faceted adventure at its most fun: innocent, charming, colorful and vibrant, and made all the more rich by a narrative plunge that engages audiences of several ages. The dialogue is also some of the sharpest seen this side of "The Incredibles," and just as kids will find the fart jokes and Britney Spears impersonations funny, so too will the adults be engaged by pop culture references, in-jokes and satire quips, apart from the initial brilliance of the visuals.

The hero of the picture is Rodney Copperbottom (voiced by Ewan McGregor), a young robot from Rivet City who has the ambition and determination to do great things - namely, invent new gadgets that will assist other robots in day-to-day life. Towards the start of the picture, he unleashes a nifty little creation that basically stacks dishes swiftly and neatly into dishwashers, a prospect that at first greatly pleases his father Herb (Stanley Tucci), who works at the local diner and has primitive dishwashing hardware manually installed onto his torso. Unfortunately, such creativity is simply too much for a small town to handle (and what's more, too promising to be overlooked), so Rodney bids farewell to his folks and hops aboard a shuttle that takes him to the vast mechanical metropolis of Robot City. Reason? It is home to a successful business industry which encourages the young dreamers of the robot universe to come and have their ideas heard, and Rodney anticipates being able to walk up to the headquarters, hand over his invention and then acquire fame overnight as a result.

Alas, things don't quite work out that way. Management over the corporation has changed, and the company's likable founder Bigweld (Mel Brooks) is no longer around to keep those kinds of doors open for robots who have that creative drive. Instead, the company has fallen under the control of the creepy control freak Ratchet (Greg Kinnear), who strides into board rooms and makes all sorts of absurd proposals about how to streamline efficiency and maximize corporate profits. "We stop selling spare parts!" he proclaims - in other words, take away an essential product for robots that may have defective elements - and then the corporation green-lights a venture that would require all citizens of Robot City to buy complete system upgrades. Those who could not afford them would simply be disposed of in the scrap metal yard that sits deep beneath the city itself.

The conflict kicks a very zealous narrative adventure into gear that is part buddy movie, part coming-of-age tale, part ensemble satire and even part slapstick comedy. The screenplay by Lowell Ganz and Babaloo Mandel does not forget to supply these ideas with the necessary humor, either; they have in their arsenal (among other things) all sorts of witty dialogue, physical gags, jokes about bodily fluids, quips about gender-bending, and the occasional pop culture spoof. The sources are unlimited, but Robin Williams as a sidekick named Fender more than services for a cause of constant amusement - nearly three fourths of the laughs derived here come directly from him. Some might say that this is just an exercise in trying to recapture something left behind by Williams' last outing as an animated character in Disney's "Aladdin," but the movie makes solid distinction between the two. Fender is not a clone characterization but rather an isolated comedian and Williams doesn't repeat the same comic shtick expected of him as a voice actor.

The director is Chris Wedge, who, after "Ice Age" and "Bunny," seems destined to have a very prominent career as a filmmaker of animated feature films. He is doing with computer animation what Don Bluth essentially did for hand-drawn feature cartoons - that is, isolate the material outside the Disney benchmark and come across new and creative ways to look at the technology. His ultimate success in "Robots" is the very texture which the solid story and its characterizations are derived from; all those gadgets, gizmos and broad city skylines contain such careful and crafted symmetry that you suspect you could almost reach out and touch whatever is on screen at that precise moment. The vast Robot City is imaginative enough to deserve comparisons to the great fictional metropolises of any cinematic genre, and its complex mechanical nature provides us with more than our fair share of "wow" moments (especially during one sequence in which the characters navigate a broad stretch of highway that seems more like a giant erector set rather than a path of transportation).

It is a great movie to look at, but more importantly is also one that can amuse, charm and entice on levels other than just the visual. "Robots" is a cartoon at heart, but one that is both persuasive and challenging enough to keep the limitless promise of animation alive - and, indeed, outside of the narrow mindset that insists we only have Disney and Dreamworks to count on when it comes to great filmmaking in CGI.

Produced by Jerry Davis, John C. Donkin and William Joyce; Directed by Chris Wedge; Written by Lowell Ganz and Babaloo Mandel; based on the story by Jim McClain and Ron Mita